Escape Pods for my Spaceship 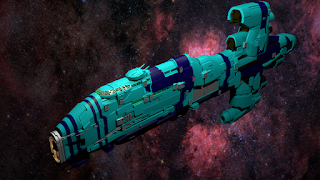 There is lots of progress on the model today, with the colour scheme nearing a final state. I like the starscape as well. I've lit it to make it nice and dark and moody. Now the spaceship is standing out a lot better against it. I'm also pleased that I just remembered something I usually forget.

I usually forget all about escape pods and don't even hint at them as part of a model. With this model, however, I have remembered that I love escape pods, and so I immediately did a Google search for inspiration, so that escape pods can be an integral design feature before I even grt to the interior to do the deck plans.

I found an enormous amount of inspiration around the web, with numerous escape pod designs, of all different shapes and sizes.

I particularly like this Star Trek version of an escape pod, from neutralzone.de, which I will be using for inspiration.  There are some more images of it here on the memory-alpha-wikia, but other than creating a similar shape with a couple of windows, I won't, of course, follow the design too slavishly. 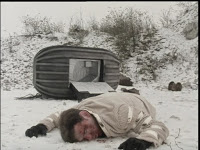 I probably like escape pods so much because they were so liberally used in the sci-fi I was watching as I grew up. There is the start of the very first Star Wars movie, a New Hope, where an escape pod plays a pivotal role, but there is also Blake's 7, where escape pods often play an important part. I particularly remember this episode, brought to us as a photo story by this wonderful blog called tygerwhocame2t, with evocative images of escape pods busted open in the snow.

Due to budget restraints, these escape pods from Blake's 7  are small and rudimentary looking. I want my spaceship to have bigger, more luxurious versions. Each pod will probably have enough space for a party of sci-fi adventurers, to make them more useful to  GM writing adventures for spacers.

As ever, the reason for all this 3D tomfoolery is that I'm working on the next in the series of RPG supplements I write, called Spaceship Owner's Guides. They are available from DriveThruRPG, and there are already more than ten of them.