The Spaceship Gets a Metal Hull 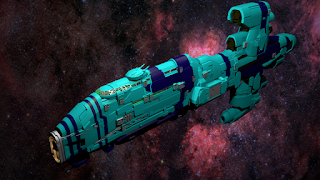 At the moment, I'm pleased with the shape of the hull I have created, but it looks a little too much like a plastic toy. I want the hull to look like it is made of metal, and so I started investigating a way to easily do this. This is one area of 3D modelling that I have always cut corners on in the past. I found a forum discussion where the posters were talking about creating a metal surface, and they talked about nodes.
This is not uncommon. Whenever the task is to create a surface that looks a certain way, one of the first thing that gets suggested on the forums is to use nodes. Unfortunately, nodes look incredibly complex, but, if they can give me the surface I want, perhaps it's worth getting to grips with them.

I decided to try to reproduce the nodes used in the forum, but this turned out to be more difficult than I had imagined.

So, I started my nodes education with a stack exchange where the question is, what are nodes?
It was interesting, and it gives a good overview of the theory, but it doesn't include information on which buttons to click or where to find them, so I continued on with my research.
Most tutorials I tried started with the words, add a node to the surface without explaining how to do this. I found this rubber material tutorial, which was almost as  vague, but included a few lines of extra information about starting the process off. I have to start with a material, well I know how to do that already. I could only read the first few steps, because the rest required payment, but it seemed like it would be enough.
I opened a nodes window, made a new test material and was about to plonk down a node box, but they were all greyed out. Grrr! More research required. This page from the Blender manual seemed to have the missing step. It said I should tell the node editor that this was a noded material, erm, okay. It took me a while to find this button. In my current version of Blender, I found it in the header (actually by default a footer for me) in the node window itself. A little box to tick alled, Use Nodes. I clicked it and two nodes appeared. yay.
Neither of these nodes looked like anything in the suggestions in the forum. This was because, as the Blender manual says, I had to change the render engine value in the topmost header of my Blender window to "Cycles".
I started making progress so I hit the render button to see what I had done, but I saw that the lighting was all over the place. The settings I had been using with the blender internal renderer were not working with Cycles. 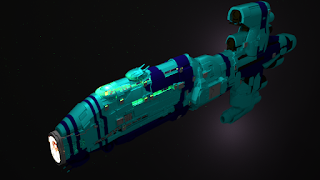 Everything in this image is the same, except that I am now using Cycles as the renderer. The lights inside the spaceship now look like radioactive fire and the background is so murky, it's like the spaceship is under the sea.

So far, the results look even less like metal, but I'll keep tweaking until it starts to look okay. I also have to add the background image of stars in another way. I started learning about it here at Blender stack exchange. It's a great tutorial where one of the answers uses animated gifs to show you what to do. After all these adjustments, the image was starting to get better, but it had a lot of pixelation. Random bright pixels scattered about that are called fireflies. So I had a quick look through the top results from Google for a way of getting rid of them, and came across this advice from Blender Guru. 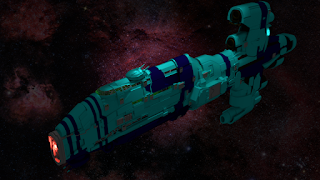 So, after messing around for a few hours and learning about Cycles and nodes, I have the scene lit a little more atmospherically, and the hull, I hope, looking a little less like a plastic toy. It's still a little underlit, so there are a few hours ahead of me, moving lights around, turning them up and dimming them down.

And the reason for all this fiddling and tweaking of settings is that I'm working on the next in the series of RPG supplements I write, called Spaceship Owner's Guides. They are available from DriveThruRPG, and there are already more than ten of them.