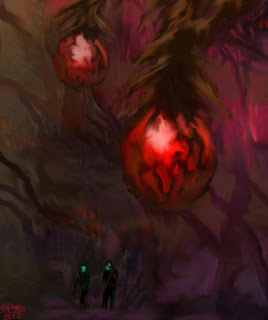 I'm adding yet another sci-fi short story to the clogged annals of sci-fi lore. Nobody asked me to do it, of course, but I think there's always a place for more sci-fi short fiction in the world, especially when it's free, like this one. The story is inspired by that old chestnut: the third of Clarke's three laws, which is that - Any sufficiently advanced technology is indistinguishable from magic. Not everyone agrees, obviously.

Naturally, any alien or time traveler trying to put one over on a gullible new species can represent a technology as magic. That the basis of the law. But I'm not sure that's correct. There have been plenty of crossovers between different cultures before now, and although people have been fooled briefly by technology, they generally cotton on pretty quickly.

But I think a culture capable of teleportation, for example, or faster than light travel, would be akin to wizards, even for the men and women of the future on exploration missions who might encounter them. Anyway - here's the story - enjoy.

Captain Parsons of the survey team was gunning the engine and hurtling across the planet's terrain like the hounds of hell were after him, and in a way they were. The creature chasing him wasn't a hound, but it was undoubtedly some monster spawned in the underworld, not a thing that had any right to exist in a sane world.

He had seen a woman, a human woman, which was impossible in itself, and she had killed his security officer, Fenric. That was when he had started running, dived into the rover and hit the accelerator. The woman had frozen Fenric in place with a word, a word that hurt his ears when he heard it and hurt his mind when he tried to remember it.

It was Fenric's own fault in a way, he'd shot first. Why had he done that, Parsons asked himself, but he had no idea. Fenric was a cool head, had been a cool head Parsons corrected himself, not the type to have bad trigger discipline.

And the shot had simply gone straight through the woman, not effecting her at all. A patch of ground behind her had cratered and dirt had been thrown in the air, but she didn't try to dodge the blast in any way. No, the only explanation was that the shot had gone through her.

And then she had killed Fenric. She had frozen him in place, he'd been screaming Parsons remembered, frozen in place but still able to scream. Then she had floated towards him and sunk her teeth into him, like a vampire or a jungle creature.

Parsons shook the thoughts from his mind. All his attention now had to be on getting back to the lander and getting off planet as soon as humanly possible. All he had to do was drive back down the path they had carved from the alien jungle, drive up the lander's vehicle ramp and blast off.

It was a more difficult drive that he anticipated, however, the local vegetation was already growing back, encroaching on the narrow track, but there was still enough room to drive quickly. He glanced at the speedometer, a display projected in his eyeline on the inside of the rover's expansive windshield. He was averaging about fifty-five miles an hour, not bad for the conditions.

He started to relax a little, his shoulders untightening from where they had been protectively drawn in. That was when the first insect hit the windshield. He didn't think anything of it at first, but then there was another and another. The insects were busted apart as they hit, blood as purple as expensive wine sent flying with each impact. Then there were ten more, then another ten, and still more impacts were coming.

"Rover," he said, addressing the computer embedded in the vehicle. "Why aren't the wipers turning on?"

"By the powers," Parsons growled. "What's going on here?"

And then the windscreen burst open. It didn't shatter, it sort of gave. A hole appeared at its center, accompanied by the sound of smashing glass, and the insect blood started to drip from the hole, and collect in a pool on the rover's cockpit floor. The cockpit was filling with flying blood drops, fluttering insect wings and severed insect limbs, and from this mess a shape was forming, the shape of a woman.

He pulled on the emergency handle of the door, causing it to explode away from the vehicle and he hurled himself after it. He tumbled through the jungle undergrowth, still traveling at fifty miles per hour or more.

Only the armor and padding of his environment suit saved him from multiple broken bones, and only the adrenaline in his system stopped him being instantly incapacitated from the pain of the bruising he took.

He staggered to his feet, and he saw the rover crash into trees up ahead. It was screaming, the rover's computer, which he had never heard express any emotion at all, was screaming pitiably, like a giant animal brought down by a pack of raptors.

Parsons could also see the lander, close enough to run to, but he would have to go past the rover. There was no choice, running in the other direction, into the alien jungle meant certain death, he was sure of that now. He tried to give the rover the widest birth he could as he ran past it, on the way to the lander, but he was still close enough to see the woman, the witch, the monster, inside, torturing and killing the poor, limited intelligence at the heart of the rover. He looked away and ran on, made it to the lander and ran up the ramp.

A hologram was already there, waiting for him when he arrived. It was his boss, the leader of the survey mission, calling from the safety of the orbiting spacecraft.

"Yes," the commander nodded. "Most unfortunate to lose a valued member of the survey team."

"It was devilry," Parsons screamed. "She's a witch."

"I doubt it," Brant replied, her voice calm. "There's no such thing as magic. Remember the old adage: A sufficiently advanced culture will seem to be able to do magic, to those who don't have the same level of technology. The thing is... nobody said it would be good magic. Nobody said it wouldn't be evil magic."

Before we wrap up here, just a reminder that the best way to support this blog is to buy one of my books, so why not go over to Amazon, or Kobo and see if there is one that catches your fancy.
Labels: short story