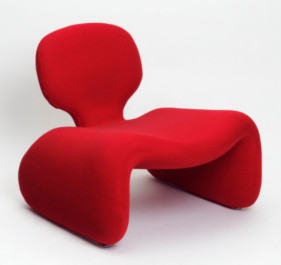 It's All About the Sofas. Anyone who has seen 2001 A Space Odyssey will be likely to remember the uncomfortable-looking and futuristic redchairs in the Hilton lobby of Space Station Five, where DrFloyd stops on his way to the moon. In the visual medium that is movie making these chairs are a powerful background detail that the audience notices without any time being taken away from the film's action. Actually it's more of a lackofaction in the case if 2001, but the point is still valid. The camera does not have to linger on the chairs for them to have their impact. The chairs aren't a plot point, they are simply productiondesign. They enhance the movie, without being an integral part if it.
The same effortless influence of production design can be seen in 1984’s Dune. Every world we visit in the movie has its own unique look, extending to costumes, architecture, and spaceships, all with a distinctive retro-future aesthetic that borrows heavily from ArtDeco. The Art Deco influences are so extensive that I remember BarryNorman saying on Film84 that it had taken its style from Cunard. The Atreides family, dress in formal militaristic suits, while the Harkonnen homeworld, Geidi Prime, is harsh, industrial, and factory-like. Dune would certainly have looked different if Jodorowsky had gotten to make his version of Dune.

The Mobeus inspired production design on The FifthElement is also a stunning example of the visuals helping to define the action happening within it. The density of information that can be conveyed visually and the world building that can be doe are enough to make any novelist extremely jealous. It would he great to bring this ability of production design to enhance a story to a sci-fi book, but it's difficult.

I can't describe everything I see in my mind’s eye without using a lot of words that would be better spent on plot or action. I can, however, describe one or two details here and there, and have them say what I need said about where a scene in the book is happening. Also, if a location is important enough that the characters return to it over and over again, a clearer picture of it will be built up as I describe one detail one time and another detail the next. All the little details build up to create a whole picture. It can never be as rich as the scenes presented in the best sci-fi movies and TV shows, but it does enhance what is happening in these spaces.

For example, in Galaxy Dog and its sequels the observation deck of the spaceship that the main characters travel in is an important little patch of real estate. When one of the main characters first encountered this place, I described the giant windows and the view of space. The view of space is the most important thing about the room, and it would have been criminal not to describe that in some way. Now, after the character has visited many times, I found myself describing the sofas. Here’s what I said:

In the end they chose the observation deck for the meeting, with Altia and Knave sprawled on the low, comfortable couches. They were an unusual, and alien, design. They looked industrial, the same bronze, gold and silver as the rest of the ship, but the feel of the material was sensuous and comfortable. It was seating designed for human backs, but created by a computer intelligence that had never seen a sofa designed by a human before. It was unencumbered by notions such as there should be one chair for one person. It was more of a seating environment, perfect for louche lounging, and star gazing. Despite this relaxed feel, they were all three some distance apart, ignoring the fact that the metallic-fabric covered couches looked more like they belonged on a VIP pleasure cruiser than the most capable fighting ship the rebellion had.

Jay didn't bother to sit like his two shipmates, or, more accurately, to sprawl in the case of Knave. Sitting didn’t lesson the stresses in the actuators in his knees, hips or feet particularly, so he didn’t see the need. He felt it would be an affectation, an aping of human ways if he did. Instead he stood by the large, hexagonal windows, watching the streaks of the stars hurtling by at faster than light speeds.

For me it’s all about the sofas, though some prefer the corridors, but the point is that these seemingly inconsequential details are so important, and leaving them out impoverishes the story.
Okay, enough blogging, I'm off to watch some DoctorWho.