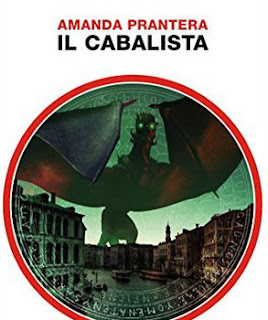 I live in Italy, in Venice to be exact, and I've lived here long enough now to start thinking of it as my adopted home. My Italian isn't perfect but I can read a book. I don't understand every word, but I can usually guess the ones I don't know from the context.

I was browsing through a second-hand bookshop in the nearby city of Trieste, which is just up the coats from Venice, and I found a sci-fi book set in my adopted home town. It's a book called TheCabalist by Amanda Prantera.

The Italian version I picked up has a lovely cover by FrancoBrambilla, an Italian illustrator who does a lot of sci-fi. The lovely cover was a big factor in me picking up this book, and is much better than any of the covers of the UK editions I have seen. It suggests Cthulhu and threat, and you can see the modern boats on the Venice canal, telling us that this is not a historical novel.

By the way, if you think you are ever likely to read this book, be warned, this blog post is really quite spoilery.

It's spoilery because I'm reading the book in Italian, like I said, so I've looked up a bunch of reviews and recaps of the story, to help me understand some of the more difficult passages that I'm reading.

The LA Times, for example, wrote a review of TheCabalist, and they say, in a nutshell, that the hero, Joseph Kestler, thinks he knows the solution to the age-old question of what the cosmos is really about. He is a Venetian magician and, through the power of words, he has discovered he can manipulate raindrops, locusts and even a puppy.

From other reviews, and from the part I've already read, I've also learned that he is terminally ill and wants to secure a worthy successor to carry on his work after he dies. Kestler works desperately to complete his cabalistic project as well as to devise a plan to ensure its preservation for future generations. All the while, he is aware of a small and obnoxious neighbor, a malevolent child demon called the Catcher (or Catfisher), who lures cats to their deaths. This character's presence proves surprisingly relevant to the work, apparently.

The author, on her website, says that the critics were generous to the book. She thinks there is a terrific story hidden within it but it is buried under too much wuffle. The author's website is the first time I've encountered the word, wuffle, but apparently it does exist.

I'm just a little way into it, twenty or thirty pages, but I am already enjoying it. There has been a very beautiful description of Venice, for example. I can't find the English text of the book online, but I did find the function to search the text on Google Books. I used it to make a couple of snapshots to give an idea of this nice description of Venice, but there are a couple of pages of it, and the three snapshots here really just give an idea.

I'm not looking forward to reading about the Catcher. The idea of killing cats is very disturbing, and it reminds me of Kafka on theShore by Haruki Murakami. Some delightful images of a stage version of the book can be found on JC-NYC. In that book, Nakata, a kindhearted old man, who had a strange accident while on an elementary school outing to pick mushrooms, can sense otherworldly events – such as raining fish – and has a special power to communicate with animals, which allows him to earn extra money by finding people’s lost cats. His love of cats leads him to murder a cat-killer who calls himself Johnnie Walker and dresses like the Scotch whisky mascot, among other surreal adventures. I read the book quite a while ago, and I vividly remember the cat killer, when a lot of the rest of the work has faded from my memory.

Anyway, I haven't gotten to the cat killing yet, and I'm looking forward to reading this book about my adopted home town. It will take some time, of course, because I'm also spending a lot of time writing. Find a link to one of my books, Galaxy Dog, below.
Labels: Ebook reviews Sci-Fi