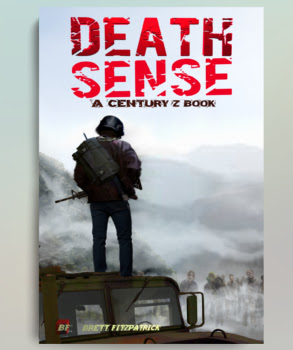 It's a long time now since Nick managed to finish his long-awaited zombie novel, Z is forZombie, but it's been on my mind lately.

It is famous for having the word rhythm spelled incorrectly 38 different times. It is also where Julius Pepperwood first appeared, a character and alter ego that Nick made up in Season 2. Julius is a hard-boiled New Orleans zombie detective, racing around on fan-boats, who finds JFK alive. Nick describes him as a man just fighting with the alligator within. You can read more about the Pepperwod Chronicles at Bustle.

But that's not why Z is for Zombie has been on my mind. I keep thinking about it, with a smile, because I've been wanting to write my own zombie novel since watching the first episode of the Walking Dead, and I don't like that Nick beat me to the punch. My book will. of course, hopefully be more serious and coherent than the work Nick produced. Hopefully, it won't just be a rehash of The Walking Dead either. Although I like the show, it is far from perfect. It started out very strong, and has lost its way a little, at least in my opinion. (Since this post appeared, I have published Death Sense at Amazon)

Much has changed since the first episode of The Walking Dead aired on Halloween 2010. As City Beat says, there was a true sense of bewilderment back then, when viewers experienced the early stages of the zombie apocalypse along with Sheriff’s Deputy Rick Grimes. Rick rode into downtown Atlanta on horseback, while the outbound highway lanes were crowded with abandoned cars. There were also flashbacks, like seeing Rick with best bud and partner Shane. The backstory concerning how the zombie apocalypse happened was kept hidden. The story is told from the point of view of a small group of characters, so we only knew what they knew.

In later series, human antagonists have often become more of a threat to the survivors than the zombies. The Governor is a particular fan favorite. The Governor ran a compound with a research lab to test whether zombies retain any trace of the humans they once were. The research was motivated by the Governor's undead daughter Penny, who he kept locked in a secret chamber in his apartment, in hopes that she could be cured someday. These are compelling and interesting stories, but the Governor is all too easy to understand, in a way that the zombies themselves are not.

The Governor is indeed dangerous, and he eventually leads an army in an attack against Rick's group. They manage to drive the Governor and his army away, causing him to fly into a rage, screaming at his soldiers for their cowardice and eventually slaughtering them all. I'm less interested in crazy and dangerous characters like these, than in the zombies themselves, and ways of making them the stars of the book, and making them truly dangerous and frightening.

I'm already 30,000 words in, after working on the book - off and on - for a long, long time. According to a site on wordcounts, World War Z is 117,000 words, so if I write a book of equal size I'm about a quarter of the way to completing my own zombie book, and being able to hold my head up high in comparison to Nick. In the meantime, there is always the fantasy trilogy I have written to be going on with. Why not start with book 1, Galaxy Dog.
Labels: Horror self-publishing Zombies