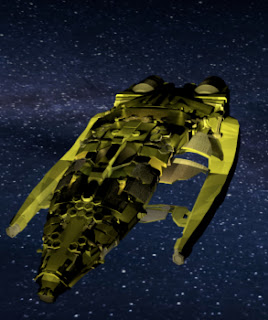 I've been working on one of my 3D spaceships for a while, several months in fact. This current spaceship project is quite different from any spaceship design I've ever done before. Usually I create spaceships with a traditional metal look, similar to these famous spaceships, which all have the classic metal-panel look. The spaceships I usually do are at home in what many people call the used future. This is the kind of future seen in sci-fi shows where spaceships look dirty, dingy, and used. These spaceships are often old junk heaps run on a shoestring by hard-bitten mercenaries and bounty hunters.

The spaceship I'm working on at the moment, on the other hand, is more super-high tech. This new spaceship is intended to be much more like an eldritch starship. It is constructed from unconventional materials, powered by an unconventional power source, and has an unusual user interface. The ship changes its interior and its exterior over time. With all this in mind, I want this one to look more architectural. While I was thinking about how best to capture that, I ended up thinking about Zaha Hadid.

She is considered an architect of unconventional thinking, whose buildings are organic, dynamic and sculptural. The main characteristics of her work are digital knowledge, technology-driven mutations, shapes inspired by the organic and biological world, as well as geometrical interpretation of the landscape.

Hadid's work is a treasure trove of inspiration. I particularly like, for example, the panels on the hotel walls in the images from this article about the Alpine Mountain Museum, which she designed. The panels aren't metallic, because they're concrete, but they are also very sci-fi and spacey, but also architectural.


Her design for a Tokyo Olympic Stadium is flowing and streamlined, and has a great impression of scale. But it was something much smaller that she designed that I am drawing most inspiration from. I particularly like the Fudge Pop Up Salon with its space defined just by flowing hexagons, which is exactly what I need for my spaceship. The salon was open for just five days, to coincide with the London Design Festival and London Fashion Week. 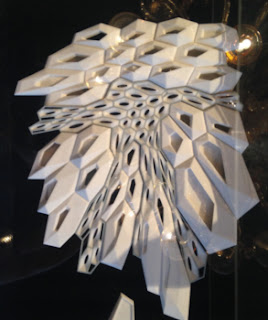 There were three periods in Hadid's architecture. There was an early, angular style, where she was predominantly thinking about her designs as architechons. These are three-dimensional abstract forms which encapsulate abstract architectural ideas. This period is very rectilinear and sharp. Then there was a transitional period where these sharp forms are combined with curves. Her final period is given over entirely to a flowing, organic style, where her designs were testbeds for Parametricism.

Parametricism is a style within contemporary avant-garde architecture, promoted as a successor to post-modern architecture and modern architecture. The term was coined by Patrik Schumacher, an architectural partner of Zaha Hadid. Parametricism relies on programs, algorithms, and computers to manipulate equations for design purposes. It is a design concept where all the elements are interlinked and an outside influence that changes one alters all the others. The aim is to build up spatial complexity while staying a recognizable structure.

I know so much about Zaha Hadid now because I recently went to an exhibition showcasing her work. It was billed as an abridged retrospective of her work, and it was held at the 16th century Palazzo Franchetti on the Grand Canal, Venice, Italy. The exhibition showcased many of the seminal paintings, drawings and models from Hadid's repertoire. It explained how her practice implemented and developed wide-ranging advancements in computer-aided design.

The developments that computing has brought to architecture are incredible, enabling an intensification of relationships and greater precision - both internally within the buildings as well as externally with their context. It took me twenty years to convince people to do everything in 3D, with an army of people trying to draw the most difficult perspectives, and now everyone works in 3D on the computer - but they think a plan is a horizontal section, but it's not. The plan really needs organization via a diagram. - Zaha Hadid

Hexagon photo taken by the talented photographer behind Kooky Photography.

To end, just a reminder that the best way to support this blog is to buy one of my books. Simply go over to Amazon, or Kobo and get one.
Labels: Spaceship