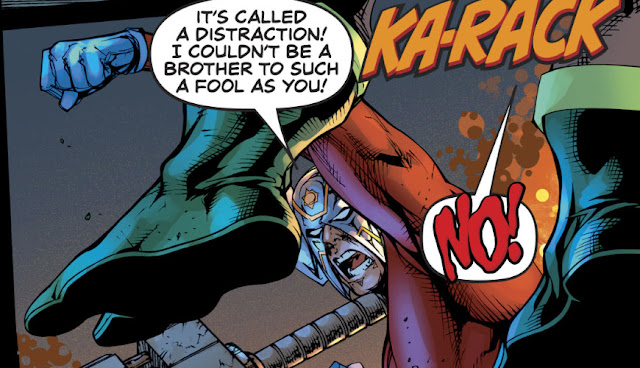 I read that DC are relaunching the New Gods, which gave me the impetus to get a new comic book reader. I recently moved from Ubuntu to Windows and have been putting off getting a comic book reader for my Windows 10 desktop. After finally swinging into action, I swiftly found a Reddit about Windows tablet apps for reading comic books. I was interested in Yac Reader from the suggestions, but I couldn’t find a Windows 10 version on their website. In the end I plumped for Cover.

I’ve always been a fan of Kirby’s NewGods, so naturally I was intrigued when I saw DC's page talking about The New Gods Special#1. They say:

In a feature length story, Orion and Lightray must come to the aid of Forager and his people, as Kalibak has established a brutal dictatorship over the Bug colony. In confronting his evil brother, Orion faces the darker side of his own nature. And, in a back-up story, master comics writer/artist Walter Simonson tells a tale of a young Orion and his friend Seagrin. Also includes a reprint of a classic New Gods tale by Jack Kirby!

I swiftly acquired a copy and, as promised, there are three stories within the comic, but the focus is the main story, with the others being a story from one of the characters’ early lives, and the other being a reprint. The main story is a battle between Orion and his evil brother, Kalibak. As just a battle between two characters, the story doesn’t have a hugely complex plot. It is more intended, I’m guessing, as a way of quickly introducing a bunch of characters that will then come back in future books, hopefully in more complex adventures.


The main question, for me, is the art. There is absolutely no way it could ever be compared with the classic work of the genius that was Kirby, but I was pleasantly surprised. It is a nice compromise between the excess of Kirby’s art and a more modern, more disciplined style.

According to the Wikipedia article onKirby: For almost a decade, Kirby provided Marvel's house style ... and designing their visual motifs. He often provided new-to-Marvel artists "breakdown" layouts, over which they would pencil in order to become acquainted with the Marvel look. Jack was the single most influential figure in the turnaround in Marvel's fortunes from the time he rejoined the company ... It wasn't merely that Jack conceived most of the characters, but ... Jack's point of view and philosophy of drawing became the governing philosophy of the entire publishing company and, beyond the publishing company, of the entire field...

On Newsarama.com, Shane Davis, the artist on this comic book, says:

This is a celebration of Kirby’s work, so you want to keep that Jack Kirby feel but do it in your own style. I really tried to mimic Kirby, especially with Highfather and Forager - which is the hardest to draw, for some reason. Not many artists, besides Kirby, can get this character to look the way he drew it... Like, with Kalibak, for example - there's this one page he did with Kalibak that kind of explains who the character is, and I based my Kalibak on that one drawing. He's big and hulking in that image. And I wanted to have the character stronger and bigger. Also, I thought about Kirby monsters, and his work on the Hulk, and his approach to other things he drew. And then I had those things in mind as I drew Kalibak, but drew him in my own way. And I especially wanted to get Orion right, but finding that Kirby look was a challenge. I was surprised that I was able to get the kind of raging Orion face in some panels to have the same feeling that Kirby gave him.

I think Shane Davis’ efforts come through in the art. I was particularly impressed with Forger, for example. I was less impressed with Kalibak. Kirby makes him look huge in an ill-defined animal way. Davis makes him big in a modern, roided-out way. It’s a compromise, and it works to stop the art looking dated, but it isn't Kirby.