Harvest of Time - Doctor Who book by Alastair Reynolds - review 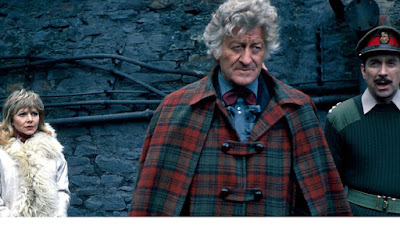 I’m half way through reading Harvest ofTime by [Alastair Reynolds a Doctor Who book written by one of the outstanding talents of current British sci-fi.

The Doctor that Reynolds has chosen to portray in the book is the ThirdDoctor played by Jon Pertwee. My favorite is the Fourth Doctor, played by Tom Baker, but I also like Pertwee, and the characterization in the book rang true for the Third Doctor.

I'm pretty excited by this book, to the point of making excited rodent noises while reading it, because any book by Alastair Reynolds is likely to be a good time full of sci-fi thrills, but also for a much more important reason. I grew up reading Doctor Who books, and the first grown up book I ever read was Doctor Who and the Revenge of theCybermen, published by TargetBooks, and I'm sure I wasn't the only one. TV Tropes has a loving article dedicated to these Doctor Who books, and they are still fondly remembered today. The quality of the writing varied considerably, it has to be said, and even my favorite of the writers Target employed, Terrance Dicks, had many stock phrases that he repeatedly deployed in his novelizations. In his books, the noise the TARDIS makes was invariably "a wheezing, groaning sound" for example.

I remember being struck by the biography of Terrance Dicks included at the back of his Dr Who novelizations. I seem to remember he boasted of doing numerous jobs before starting writing, including building chicken coops.  My life has taken a similar route, with numerous jobs leading to a life where I gleefully write sci-fi novels. I think that very first Doctor Who book may have had much more of an influence on me than I suspect.


Target's Doctor Who books were for intended for children, though they later became more interesting to adult collectors, and they were never over 150 pages in length. I wasn’t expecting the normally wordy Alastair Reynolds to capture this style of writing, but I think he has come very close, much to my pleasant surprise. The style of the book is just like the books I grew up loving, not in the least believable or even grounded in science to any particular degree, but suffused with menace and gritty 70s locations in windswept and rainy parts of the UK.

The book is very much a treat for me, and pushes a lot of my buttons. It has Doctor Who, of course, which I love, but it also has a large helping of 70s nostalgia. For example, when the Brigadier calls in an air strike to deal with the alien threat at the center of the story, the planes he calls in are Phantoms. I remember watching TV in the 1970s, and the stock footage of military jets used was always a squadron of Phantoms. It's these little, spot-on details that really make this book. Some of the scenes in the book are set on an oil rig, out in the North Sea. As I was reading, in my minds eye, the surroundings were all cheap studio sets with walls that wobble when doors are slammed and everything overlit and filmed on video. There are some differences to the original show, and its novelizations though, such as a lot of helicopters flying around that the BBC would never have been able to afford back in the day. But otherwise it was very true to the spirit of old-school Doctor Who, and the extra budget it gets is all to the good.

The bad guys in the book are not one of the classic monsters, such as the Cybermen or the Daleks, unfortunately, but they are creepy and appropriate for the Pertwee era. The characters compare the menace to the Autons, which shows what Reynolds probably had in mind as he was writing. Again, these creatures would have been beyond the BBC sfx department’s ability to create at the time. They could be made now, using CGI, but are a little jarring compared to all the other elements that are spot on. Despite that, I can heartily recommend this book to any Dr Who fan, especially anyone who enjoys the Target novelizations.
Labels: Doctor Who review sci-fi novel