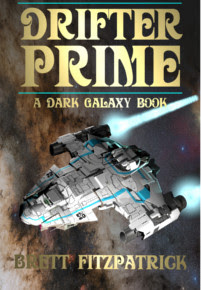 I am designing the cover to episode four of my series of sci-fi novels at the moment. Only a few thousand words are written as of yet, but that just means I have plenty of time to work on the cover in tandem with writing the actual book. I’m designing it using Blender, an open source 3D modeling suite advanced enough to create the model spaceship for the cover and the typography.

I already have a half way decent looking spaceship, though it still needs work, some nice text, if a little retro, and the beginnings of an artificial planet in the background. Blender could even create the background starscape, but I cheated and used a picture taken by a European Space Agency telescope.

Once all these elements are in place, Blender allows you to place them in a virtual studio, set up virtual lights and take virtual photographs of them, a process called rendering. I haven’t set up very many lights yet, and the ones I have put in place are quite muted, which results in quite a dark scene. This has me wondering whether to give the spaceship a brighter paint job and flood the area with light, or leave the whole thing dark and brooding as it is at the moment.

There is lots of advice out there about writing a sci-fi book, and even advice on what font to use on your sci-fi cover, but very little about the art itself. As usual, I don’t trust my own instincts, which are persuading me to stay dark, so I started Googling sci-fi novel cover art, to see if I could glean any kind of guidance. I started by Googling for dark cover art. 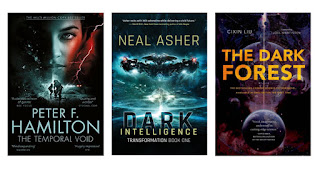 I found some very nice ones, including, The Temporal Void by Peter F. Hamilton, Dark Intelligence by Neal Asher, and The Dark Forest by Cixin Liu. I have read The Temporal Void, and I liked it even though I don’t think it’s Hamilton’s most successful work. I have read other books by Asher but not Dark Intelligence, and only today I had The Dark Forest in my hand at my local bookshop, debating with myself whether to buy it. In the end I decided instead for Revenger by Alastair Reynolds. Dark covers are obvioulsy to be found on the sort of sci-fi I like. But do dark covers sell? 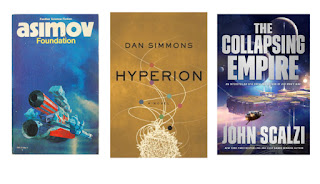 When I searched for bright cover art, I found some interesting, retro covers, and some modern ones, including Foundation by Asimov, Hyperion by Dan Simmons, and The Collapsing Empire by John Scalzi. Of these three, it was Hyperion that surprised my the most. Anyone who has ever read the book will know that it is one of those strange books where sci-fi meets horror. The Shrike, for example, is a creature that would be equally at home in a horror movie, so the bright cover didn't seem a good fit. A colorful cover is, however, perfect for the Golden Age sci-fi of Asimov. Of the three the only one I haven’t read is John Scalzi, though I know he is quite famous for his political opinions on his blog.

I am very much toying with the idea of keeping the cover to number four in the series dark, though another voice in my head is urging me to keep it looking like the previous three in the series, so as not to mess with my “brand” as a sci-fi author.

There are still hundreds of thousands of words to write, and therefore there is still a lot of time for me to go backwards and forwards with this problem. The cover of a novel is probably the most important element for grabbing a customer's attention, especially on line, and so it absolutely deserves very careful consideration.

Since this post was written I have completed Drifter Prime, and it is available from Amazon.
Labels: Dark Galaxy Self-Published