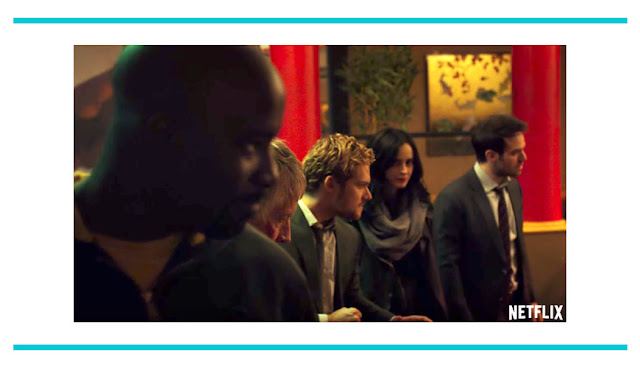 The Defenders is the big thing in nerddom this week, and I’m binging, just like anybody else. I’ve only watched two episodes so far, and I am absolutely loving it. These two episodes have all been about introducing the heroes, Iron Fist, Daredevil, Luke Cage and Jessica Jones.

Each hero is almost completely compartmentalized during the first two episodes, which is very unlike how things would be handled in a comic book. In a comic book there would be a misunderstanding forcing the heroes to fight each other, before they realize they are all on the same side and start to work together. There is at least one scuffle between the heroes, but it is inconclusive, allowing each hero to have plenty of screen time where they do their thing. Showrunner Marco Ramirez told IndieWire that this was very intentional.

In the story we took our time, each person introducing the audience to their own worlds. We made sure that we really honor the fact that they all existed independently before they start coming together.

The compartmentalization goes as far as the look of the show. The scenes with the four different heroes are suffused with four different colors, depending who is on screen.
Jessica Jones is surrounded by cool blues when she is on screen; Luke Cage is bathed in warm yellow light when he is in action; Daredevil’s appearances are accompanied by splashes of red and Iron Fist is lit in sickly greens. The Lighting is one of the things io9 likes about The Defenders:

Color cues were used to reflect when a scene was oriented toward a particular character. Luke’s early scenes in Harlem, for example, are drenched in yellow tones while Jessica’s life in Midtown is largely purple and blue. Though the color palette gimmick can at times be a little heavy-handed, it feels like a natural and smart choice if you think of the show as trying to skew more toward its origins as a comic book and less as a prestige action show.

These choices come from the director, and the unusual angles and cutting she employs really lift the show. Mike Colter, worked with Clarkson as Luke Cage in Jessica Jones, sums it up when he talks about her, and how she has:

A real feel for what it takes to tell the story and how to give it that extra flair that comic book stories tend to have. She knows the camera angles, the lighting.


The look of the thing is extremely attractive, even down to the transitions between scenes. The director says that she tried to really concentrate on the transitions between one character to the next and moving from one place to the other. I established this look of trains passing, so it was almost like if you traveled across town or uptown, you would then meet the next character.

And, of course, the makers of the show know we are all going to binge it, so they don’t feel the need to spell everything out in the first episode. Instead we get hints of an oncoming threat, but what it might be is still very much unclear after two entire episodes. All we really know is that it revolves around Sigourney Weaver’s character, Alexandra. As a spoilery Birth Movies Death review of the Defenders:

Time and time again The Defenders hints at where Alexandra came from. It gives us tidbits about her and the other fingers of the Hand’s history, implying their long lives and involvement in the fall of other cities.

The characters have powers that aren’t explained in the show, the enemy is only hinted at, and there is a lot of backstory we are just supposed to know from watching the shows that starred each individual hero on their own. I wonder what a viewer watching this how without watching any of the others would even make of it. I think you need to have seen at least one of the others. If you’ve seen either Daredevil, Jessica Jones, Luke cage or Iron Fist, then you’re good to go. But if you haven’t seen any of them, it might be a little bit of a struggle to work out what is going on.

I’m a geek, deeply steeped in Marvel’s comic book lore, so none of that is any problem for me. I just can’t wait to get back to the TV tonight and continue the binge. Fair warning, this may not be the last time I write about The Defenders on this blog.
Labels: Marvel netflix TV