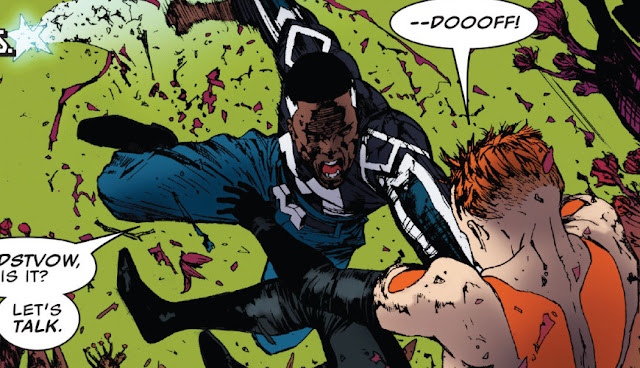 I’ve been reading comic books again, specifically one of my favorite titles, The Ultimates, or to be more exact, The Ultimates². If you look up the Ultimates on Wikipedia you get quite a confusing page. Apparently, they are quite a modern team, and have only been going since 2002. The first version of the team included Captain America, Giant-Man, the Wasp, the Hulk and Iron Man. The team then went through a variety of different lineups, but the lineup I’m most interested in isn’t even mentioned on this page. The team I like is mentioned on a whole different Wikipedia page.

It’s all very confusing, and the confusion is encapsulated by the following quote from the writer:

The Ultimates is a fine name for a book — it says it all, really. I don’t see a need to retire it just because the universe it came from is no longer with us.

The team has no Caucasian men, and it is diverse in both race and sexuality. The team consists of Black Panther, Blue Marvel, Spectrum, Miss America, and Captain Marvel. On the team's diversity, Ewing said:

It’s just fiction reflecting reality — there are all kinds of people in the world, and we should reflect that properly and try not to screw up. To be honest, I think there’s a long way to go in a lot of ways, both on the page and off.

The Mary Sue are also fans of the Ultimates. As they say:

The Ultimates is living proof that having diverse characters in a book doesn’t mean the comic has to be an after school special, but can simply be a sci-fi/superhero book where the protagonists’ different backgrounds facilitate a lively and unique adventure story.

I like how diverse they are, but the real reason I like the book is because the stories are so full of science-fiction ideas.

For example, they reprogram a hugely powerful alien, Galactus, to create life on planets rather than destroy it, they fix a time-stream stressed by other characters’ time-jumping shenanigans, they invent device after device, and they use every half-forgotten piece of pseudo-science form around the Marvel universe. One of my favorite parts of the comic book is where they make use of Jack Kirby’s cosmic ideas and then take them to new places.

While doing some background reading, I found an article that says the Ultimates are based on The Authority, so I ended up reading about this new team, at least new to me. But that’s how it is with the Internet, you start reading about one thing and end up reading about something completely different.

As the article says:

Just as Authority leader Jenny Sparks was prone to making reassuring remarks to the Earth populace over a reality-spanning loudspeaker, the Ultimates keep the world abreast of their activities, including borderline insane missions, no matter how incomprehensible or insane they sound. In fact, Ewing makes these announcements serve double duty—as the first page of each issue, they’re also recaps.

I love those first pages, and I’m glad this idea survived from the earlier comic book. There is a lot to love in this comic book for any fan of science fiction. It’s not just guys in tights smacking each other; there is a lot more going on than that. The storylines that include Galactus have been particularly strong.


As the Slate article says, the story becomes even more colorfully cosmic than usual as Galactus debates and battles embodiments of Chaos and Order while playing the role of hard-boiled, long-antlered cosmic detective. It’s been a theme of Galactus stories since the beginning that the big purple guy isn’t evil and has an important purpose in the universe, but he’s hardly ever been shown pursuing anything other than his next meal. This new spin on Galactus continues to be a highlight of a consistently surprising series that, just as Galactus is now re-enlivening dead worlds, is making long-dead concepts feel full of potential.

The Ultimates was going strong when it encountered its greatest challenge: a tie-in called Civil War II, that has been met with almost universal disinterest and distaste. The Ultimates stumbled, as they had to shoehorn the crazy events of the huge crossover story into their pages, but thankfully they seem to have survived, now rebranded as Ultimates².
Labels: Comic Books Marvel