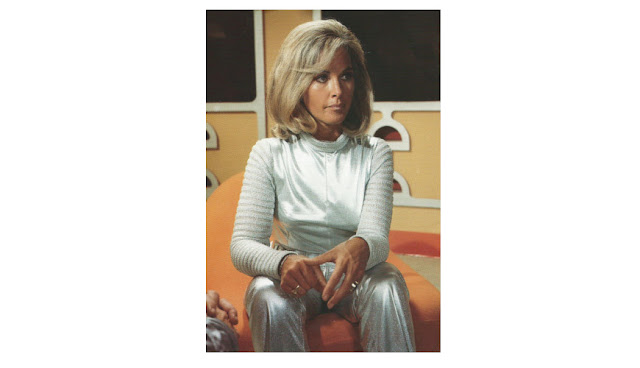 I have been thinking about sci-fi lately, as usual, but specifically about the clothes. Yes, that’s right – Space Clothes, as they are called on the sci-fi fashion page of the TV Tropes website. The stereotype, of course, is that everyone wore silver with huge shoulder pads, and pocketless spandex, and I’m glad to say there is some truth to it. A lot of early, more optimistic science fiction had people in the most ridiculous sci-fi outfits. I love this look, except for the sexism of the times that meant female characters were often forced to wear silver jumpsuits and miniskirts. The 70s was a bad time for this, but it was also a time when people thought hard about future fashion, and came up with some fascinating ideas. 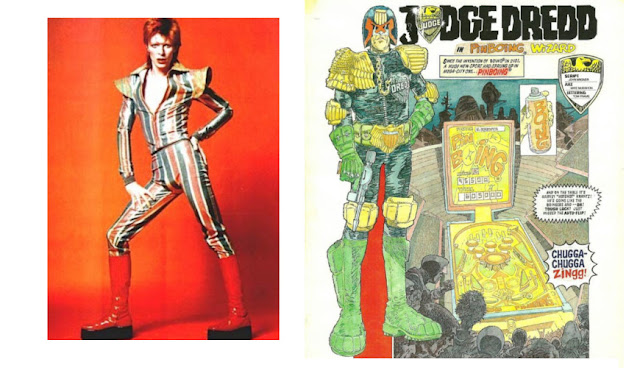 The thing is that future clothes aren’t really about the future, they reflect what is going on at the time. On Thursday 6 July 1972, halfway through an edition of Top of the Pops, David Bowie performed his new single, Starman, dressed in a multicolored Lycra jumpsuit, just a few years before Judge Dredd was being created for IPC's new science fiction comic 2000 AD in 1977. Pre-publication problems led to the first published story being drawn by an at the time inexperienced young artist called Mike McMahon. And the more he drew the more his own style emerged. McMahon's early work was characterized by a quick, spontaneous approach that verged on the messy. His figures were lean and loose, dressed in 7os fashion, like Bowie, with pen lines thrown down with verve and energy, and hatching that was done with a fully charged brush. 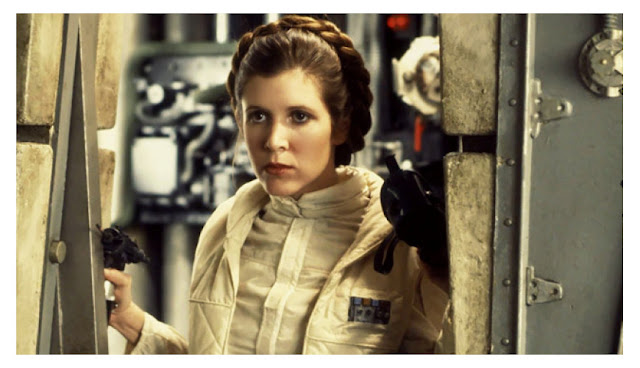 Just like in any other movie, clothes also say something about the character wearing them. For example, Carrie Fisher switched her look in Empire Strikes Back. As Poetry in Costume says, The first costume worn by Princess Leia in The Empire Strikes Back continued Leia’s familiar iconography whilst firmly placing her in an active and practical role. Unlike the gowns of the previous film, Leia now wears a combat snowsuit. She both blends with and stands out from the rebels around her, maintaining her air of regal leadership even as she mucks in. The color palette worn by the rebels of Echo Base sits in shades of tan, beige and off-white. Leia’s shades of white and ivory are all her own, making her stand out and easy to follow on-camera on Hoth, and making her an isolated figure of light in the carbon freezing chamber when the snowsuit is worn again on Cloud City. 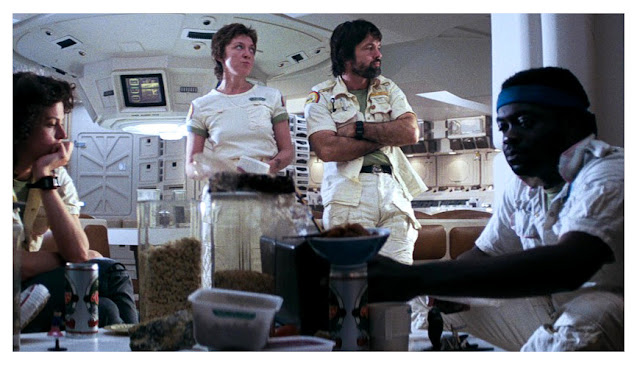 At the other end of the spectrum from the tight silver, colorful 70s jumpsuits, and heroic white combat snowsuits of these movies and comics is the baggy uniforms of more realistic science fiction.


In movies like Alien and Silent Running we see the spaceship crew wearing the most unglamorous of overalls. Kotaku talks about this unglamorous aesthetic. A lot of sci-fi presents a bright, optimistic vision of a spacefaring future, but in Alien a ship journeying through the stars is no more exotic than a truck driving down a freeway. And this matter-of-factness is reflected in every element of the film’s design: from the dark, cramped corridors of the Nostromo to the crew’s rumpled, oil-stained uniforms. 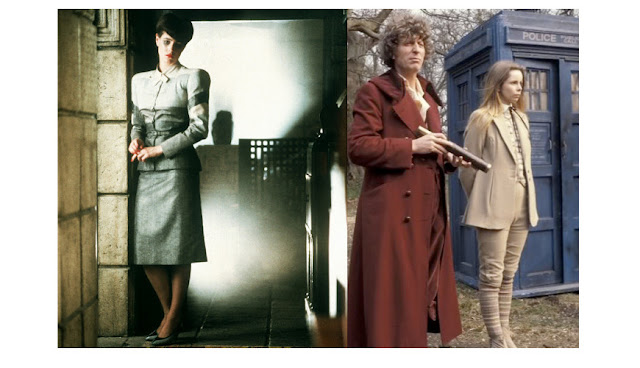 Another way to go is anachronistic fashion, such as the look of Blade Runner. In movies like this, and in certain British TV show called Doctor Who, the future fashion is represented by fashion from the past. For Blade Runner, the costume designers Charles Knode and Michael Kaplan, in keeping with the total production design, created inventive costumes that seemed influenced by the past, yet very contemporary and wearable in the future. There would be no cliche science-fiction costumes in Blade Runner, no zippered jumpsuits or latex body-suits, but rather a unique melange of 1940s styling, Japanese-inspired fashion, and punk-rock flash.

Of all the different ways to go with sci-fi fashion, I think in my series of books I have gone in a direction that combines elements of the down-at-heel future of Alien, combined with the optimistic silver of the 60s and 70s. The more advanced cultures wear spandex while the poor slugs in the bellies of the oldest human ships wear overalls and fatigues with stains and pockets.
Labels: Sci-Fi