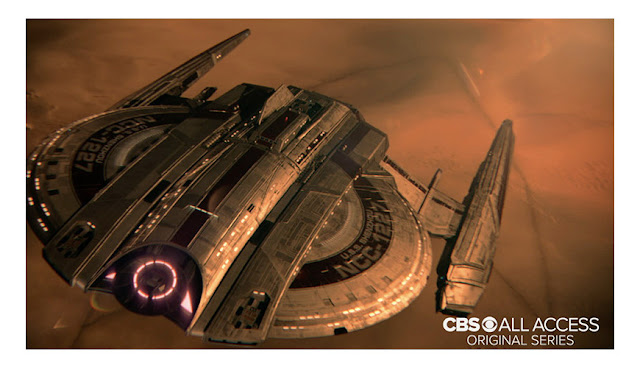 We once again live in a world where Star Trek is on TV, for the first time since Star Trek: Enterprise finished in 2005, and I would be remiss as a sci-fi author and blogger if I didn’t write a post to mark this momentous moment in popular culture. I wouldn’t want to be remiss, so here comes my hot take. With only two episodes broadcast it’s too early to say for sure what this show is going to be, but I love what I’ve seen so far. The show looks great, the acting is good and it feels both new and familiar at the same time.

Sonequa Martin-Green is the star, playing Michael Burnham. She was raised as a Vulcan, went to the Vulcan Learning Center and Vulcan Science Academy. A lot happens in the first two episodes, and she is required to go from relaxed, to terrified, to depressed, to desperate, and back again several times. Sometimes the writers have the character driven by logic, sometimes by childhood trauma, sometimes by emotion, and she manages to sell the whole cluttered mess.

Michelle Yeoh plays the captain of the Shenzhou. Yeoh chose to retain her Chinese Malaysian accent for the role, just one of the ways the series diversifies its cast. It gives her a certain authority, to my ear, like a diplomat from the UN.


There is also a cool looking robot on the bridge, which unfortunately doesn’t seem to be returning, as far as I can tell from the trailer for the rest of the season. Only a handful of the crew of the Shenzhou are going to move on to the Discovery. There’s also a Science Officer called Saru, who is very obviously intended to play the role of characters like Spock and Data from previous series. It’s a little heavy handed, but I don’t hate it. Once they have all been collected together, I hope the crew of the Discovery turns out to be as cool as this bunch.

There are a lot of little touches that I like, such as the fact that the uniforms use colors to denote rank, just like in the original series. In the original Star Trek, Kirk wore a yellow shirt, while security wore red and Spock wore blue. In Discovery, everyone wears blue, but different colors of metallic paneling and piping subtly differentiate ranks by color. CBR.com explains the different uniforms of the show in detail here, but the gist is that gold designates the command division, silver is used on Discovery to specify the science division, redshirts (the stock characters who die soon after being introduced) now wear bronze. It’s quite subtle, and looks great in my opinion.

The design of the Klingons is controversial, a lot of hard core trekers don’t like what is being done to Star Trek continuity and the redesign of the Klingons is one of the most extreme examples. I can understand where this is coming from, the feeling that beloved elements of the show are being jettisoned or ignored, but it’s a reaction I don’t share. I like the new design of the Klingons. They wear sculpted waistcoats like Elizabethan pirates and actually look alien for the first time, rather than like extras in fake tan, or with bumps glued to their heads. They also have a hint of the styling of the Cenobytes from horror movies from a very long time ago. This hint of horror is extended to other elements of their design, such as sarcophaguses (sarcophagi?) being attached to the exterior of their flagship.

This wasn’t the only touch of the paranormal about the show. The main character shares a mental bond with her alien adoptive father that allows them to communicate across light years. The science officer’s species were hunted as prey on their home planet and have evolved the ability to sense the coming of death. I loved these little touches of things that are beyond explaining or understanding. It made the aliens feel truly alien.

Another element of the show I liked was the spaceship design. We haven’t seen the Discovery itself yet, but the USS Shenzhou looks great. It appears through clouds of swirling sand towards the start of the first episode, and that first glimpse actually gave me goose bumps. It’s a restrained design, with the saucer and double engine cowling that is characteristic of the Starfleet, and it is perfect for Star Trek.

There is a lot of love out there for the show, and it should be no surprise to find out that Star Trek: Discovery already has a huge Wikipedia page.  The Wikipedia page says that the production put emphasis on carrying on the legacy of the previous series, including making efforts to feature a diverse cast. The values and designs of the Federation were updated for the series, but were expected to evolve towards those of the original series throughout Discovery's run.

It is great to see that the show passes the Bechdel test and features a very diverse bridge crew. I loved this element in the original series, and even British shows like Blake’s 7, back in the 70s had some diversity to the main cast. For me, it’s something that has become baked into science fiction and absolutely belongs.

I’m going to be here for the whole ride, no doubt, watching the Federation and the Klingons evolve to be more like they are when they were first presented to the world on the original run of Star Trek back in the 60s.
Labels: sci-fi TV Star Trek: Discovery