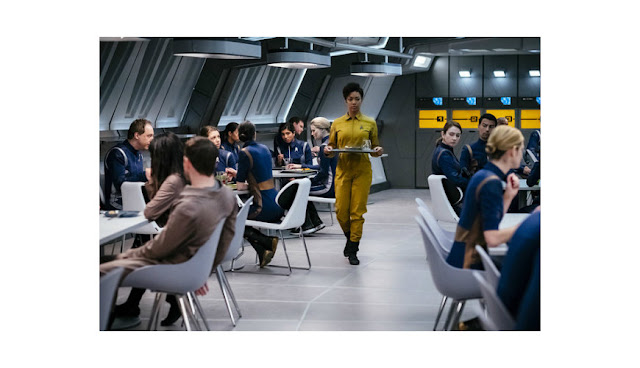 I just watched Star Trek: Discovery episode 3, Context is for Kings, the other day, and the show is taking on the shape I assume it will have going forward. We now move to Discovery itself and Michael starts to interact with the rest of the crew, including some of her former crewmates from her previous ship. I like a lot of things about this episode, and about what I assume the show is going to be. 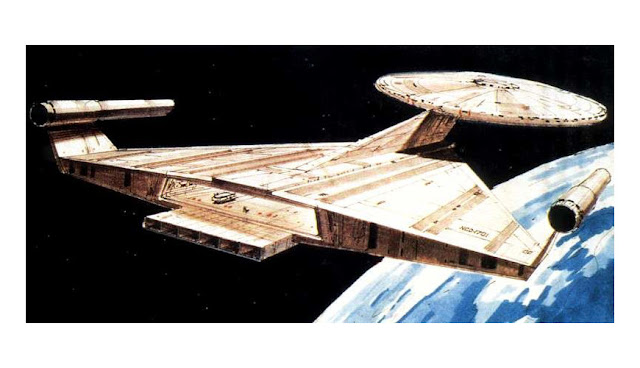 The design of the Discover is, to a 3D nerd and spaceship designer like me, one of the most interesting things about the show. It is a very unusual delta shape, based on a sketch by Ralph McQuarrie. It features a more angular shape than the traditional Enterprise: a triangular hull with small warp nacelles on either side, plus the usual saucer section at the front.

I found a thread that goes into some detail about how it came to be. In that thread, Pfontaine2 tells us that the design everyone is referring to as Ralph McQuarrie's really belongs to Ken Adam. Apparently McQuarrie was hired to work on Planet Of The Titans as a concept artist and production illustrator. McQuarrie's Enterprise illustrations are based on production designer Ken Adam's Enterprise design sketches. These sketches were supplied to Ralph McQuarrie who did some color renderings.

Aside from the new spaceship, the episode has a lot of other things going for it. Right out of the gate, Michael Burnham’s prison shuttle is picked up by the mysterious USS Discovery. Once aboard, she is billeted with a talkative roommate, Tilly, who gives her infodumps about her new ship.


But there is a lot more going on than the roommate tells her about. For example, we see black badges on the chest of some of the crew of the Discovery, though the significance of this passed me by. Luckily I have the Internet to educate me. The black badges hint at some kind of involvement from Section 31.

Section 31 is a kind of secret police organization, but not an actual branch of government. Little of Section 31's history has been revealed on-screen but its goals and methods have been described as "deeply questionable". Its methods include brainwashing, torture, assassinations and, as revealed in Star Trek: Deep Space Nine's final season, genocide, the crime that is most opposed by the Federation. The genocide involves the creation, by Section 31, of a virus designed to kill a single species, the Founders.

I’m interested to see where this Section 31 idea is going, but there is plenty more to love beside that. For example, the Discovery is described a science vessel, but the scientists have been press-ganged into the military.

The new captain is a sinister character, Captain Gabriel Lorca is vague about why the Discovery picked up Burnham’s shuttle, what he wants from her, and how long she can expect to stay with them. He also keeps secrets from his crew and likes munching fortune cookies. He gives Burnham a fortune cookie when he offers her a place on Discovery, because he’s the most on-the-nose captain in Star Fleet.

Even after she saves the day, everyone is afraid of our volatile and unpredictable heroin, Micheal, except the captain with his undefined plans for her. Sonequa Martin-Green is charming but brooding presence as Michael, the famous Starfleet mutineer, and the crew’s fear of her is very believable. Sonequa Martin-Green sells it, whether it is martial arts, pain and regret, tight-lipped hostility, or kick-ass science skills.

This show also continues subverting the technobabble of Star Trek with a bit more of an infusion of magic and the uncanny. The science of the new invention they are working on this week is described as a mix or energy and organics, a web that unites the galaxy. I like it. I am enjoying this show immensely so far, and I’m not the only one. Vulture says:

In closing, if you’d like to read a fan theory about Burnham’s origins and motivations and how they may relate to the Discovery’s time-bending propulsion system — a fan theory that is wholly unverified and that I have nonetheless decided to believe in with my whole heart — you can follow the thread by clicking here and scrolling wildly up and down.
Labels: sci-fi TV Star Trek: Discovery