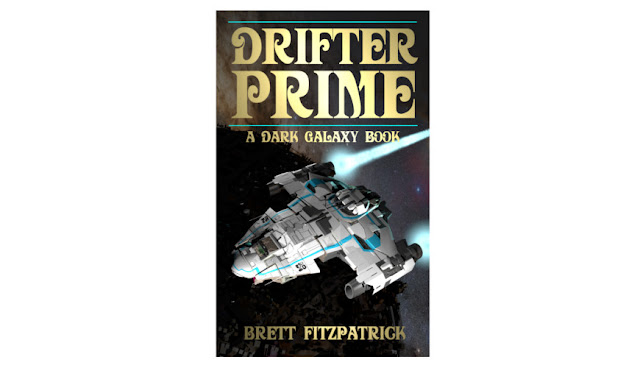 I have been hammering away at the keyboard for months, gradually grinding out Drifter Prime, the latest installment in my epic sci-fi series of novels. Just to give an idea of where I am, here are a few words from what I have been writing today. This is a scene where one of the main characters, Altia, faces off with one of the antagonists, Admiral Haygon, with whom she has some history.

This is a non-violent confrontation from just after half way through the book. The two characters are in circumstances where just shooting at each other is out of the question. Instead they duel verbally, and the fact that the next time they meet things will be different is very much implied. The function of the scene is to build tension by establishing personal conflict between the two, and also to show the difference in their world-views.

Of course, there is no guarantee this scene will appear in the book, or that it won’t be heavily edited if it does, but I do like it at the moment. Anyway, here it is – Admiral Haygon has captured Altia and imprisoned her on his flagship, and he is trying to rekindle the love they once shared by wining and dining her.

“Lepheron buds,” Admiral Haygon said, as the robot brought over a tray piled high with the green, star-shaped delicacies. “We haven’t been able to grow them in hydroponics, not edible ones anyway, so the logistics people have to bring them in fresh. Look, the tips are just turning pink.”
“They don’t grow anywhere near Drifter Prime,” Altia said, harpooning one of the buds with her spork and holding it up so she could take a good look at it in the dim lighting. “What resources were expended to ensure these arrived at your table at their freshest?”
“Huh?” Haygon grunted, surprised at her question, “I have no idea. It’s not really an admiral’s place to micromanage that sort of thing. I just tell the robot what I want, and then it happens.”
“This is exactly why the empire is riven by rebellion,” Altia said, biting off one of the tips, and being hit by a wave of nostalgia. She hadn’t eaten anything so extravagant for a long time, perhaps a year...or more, she suddenly realized. But she suppressed the feeling and carried on with her thought. “Who, in this whole fleet, apart from you, has access to food like this?”
“I’m the admiral of the fleet,” Haygon said, as if that were the only explanation required. “As I remember, you used to like eating with me. You used to like the delicacies I discovered for us.”
“A lot has changed,” she nodded her head, forced to agree with him about who she used to be. “I never did pay much attention to such injustices. I used to be blind to them. But what would my fellow rebels say now, if they saw me nibbling on such a ridiculously luxurious meal.”
“Ha,” Haygon laughed, dismissing her qualms about the food as mere whimsy, “if you think the food extravagant, wait till you see what I have arranged as a drink to accompany it.” He made the most subtle of gestures at the robot that was serving them, not even a nod of the head, not even a raising of an eyebrow, but the robot understood. It brought over a decanter and poured for Altia first, then the admiral. It was a viscous drink with a deep yellow color, like liquid gold.
“Nova Spirit?” she guessed, a hint of disapproval in her voice.
“Supernova Spirit,” he corrected her, and smiled at the surprise he saw on her face, “distilled at the same compound as Nova Spirit, but incalculably more refined and expensive. A really good food synthesizer can replicate the taste of Nova Spirit, but no synthesizer can combine chemicals in quite the same way as you find in this drink.”
“Argh,” Altia growled, as she slid away from the table with such force she sent her chair toppling backward, then before Haygon had time to react, she grabbed the edge of the table and heaved on it, intending to topple it over, but it was heavier then she expected, a very dense grade of plastic with decorative, precious metal. She didn’t manage to throw it over, but she did manage to knock over her drink and the food, sending the rare delicacies flooding across the table in a slick of oils and sauces that refused to mix with her spilled Supernova Spirit.
Haygon managed to grab his glass and jump away from the table before he lost his drink or got any of the mess on his uniform. Altia was panting now, with a mixture of the exertion, frustration at Haygon’s refusal to hear her warnings, and at the terrible waste of resources the now ruined meal represented.
“This behavior is uncouth,” Haygon said, taking a sip of his expensive drink. His tone was chiding, but there was a smile of amusement on his face. “It really is unworthy of you.”
A man entered the room, a tall man, wearing a slim suit that was decorated with a lot of insignia. He was obviously one of Haygon’s officers, and a high ranking one at that.
“Lieutenant,” Haygon said, “I instructed you that I was not to be interrupted.”
“It is important,” the man replied.
“Very well,” Haygon nodded, “what is it?”
“The ship’s computer has been compromised. It refuses to take itself offline, and our systems are failing.”
“What?” Haygon said, whatever he had been expecting the lieutenant to say, it wasn’t this.
“You did this,” Haygon yelled, turning to stare at Altia.

From this point, the whole complexion of the encounter will change as the tables are turned on Haygon. It will be a humiliation for him, but the real showdown between Altia and Haygon will have to wait until later in the book, or at least that is what I have planned at the moment.

There is plenty of time left in this book for Altia and Haygon to be separated, before coming back together for the final confrontation. So far I have written just a sliver shy of 65,000 words on this book, and I’m now in that place where I’m thinking about how long the book should be. I’m thinking of pushing the book’s word count way up, maybe to 110,000, or more. Some quick Googling turns up the received wisdom on how long a sci-fi novel should be.

TheWritePractice.com says that for science fiction and fantasy books the ideal word count is 110,000 words. They claim that sci-fi and fantasy books usually run longer than general fiction, maybe because of the amount of world building required. While ManuscriptAgency.com suggests a similar range, of 90,000-120,000 words.

One caveat is that I don’t like the way these two sites lump sci-fi and fantasy together. The two genres, at least in my opinion, are very different beasts. AbsoluteWrite.com has a forum where people worry about the length of sci-fi.  It starts with some extremely famous, but very short novels. Fahrenheit 451 is roughly 46,000 words long, Slaughterhouse-Five is 49,459 words long, and Philip K. Dick’s Do Androids Dream of Electric Sheep is 61,237 words. Perhaps people think sci-fi should be long because they are lumping it in with the doorstops sometimes written by fantasy authors.

The first book in the series, Galaxy Dog is “only” about 85,000 words in length, and it is hugely popular. There is plenty of room within that number of words to tell a story with a lot of action, and a lot of heart. In the book, what starts as an ordinary invasion of an alien planet, brings to light an ancient xeno-archaeological site of huge importance, setting in motion a long chain of events. The two books that follow Galaxy Dog are both longer, but does that mean they are better?

I’m going to have to stop obsessing about word count and just allow the book to be the length that it needs to be. There are still a number of events left to unfold, and rushing the book would be just as big a danger as padding it to conform to somebody else’s idea of the perfect sci-fi novel word count.
Labels: Dark Galaxy sci-fi novel Self-Published