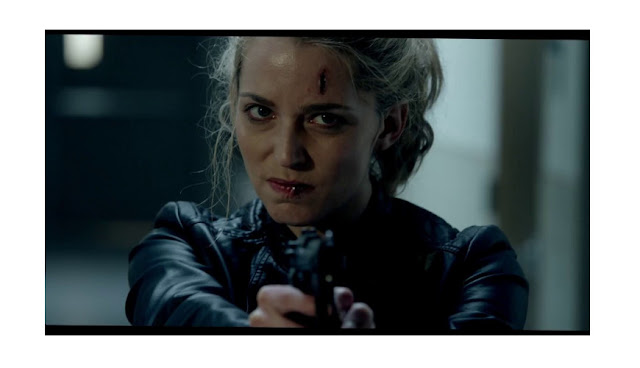 A Groundhog Day Loop is where the main character is doomed to repeat a period of time over and over until something is corrected. This trope is named after the film Groundhog Day, which wasn’t the first to do this, but is the best known. It is this time loop element that makes this movie a slice of sci-fi rather than a horror movie, for the purposes of this review at least. This same structure has been used over and over by sci-fi movies over the years, including Source Code, Edge of Tomorrow, and Looper.

The classic Groundhog Day structure is that the main character realizes what's going on, while everyone and everything else snaps back at the end of the loop. There are also several odd little events that don't have any real significance, and these events are replayed when the day repeats. The looping character will then demonstrate "prescience" by offhandedly predicting these events. Happy Death Day conforms in every particular to this structure, and has some fun with it, too.

The movie is written by Scott Lobdell, who is an interesting character, to say the least. I read his Wikipedia page and it turns out he comes from the world of comic books, not the world of movies. I was heartened to read that it was he who was responsible for having the Marvel character Northstar come out as a homosexual.

Unfortunately, it turns out this outing was just a ham-fisted publicity stunt, and there’s worse. Because of his association with this comic book plot, he was invited in 2013 to appear on stage at an event where a panel of comic book creatives discussed LGBTQ issues. He later had to apologize to a fellow panelist for sexually harassing her on stage, and making racist comments about her appearance shortly afterwards. The Mary Sue wrote about it at the time and the comments section has hints that this may not be an isolated incident.

In the comic book world he is not most well known for his connection to Northstar. He is most famous for his work on Starfire, which many see as problematic. Sequart,org writes in one article that:

This new Starfire combines (1) a woman who looks like an orange-skinned swimsuit model with (2) the memory of a goldfish and (3) a belief that sex should never be anything but utterly casual. She’s the ultimate male fantasy, the ultimate sex object...there’s no disguising that this fantasy is a heterosexual male one, which reduces Starfire to the status of object for recreation.

This movie – the version written by this sleazy guy - was slated to star Megan Fox and be directed by Michael Bay. That would have been an exploitative and probably unwatchable movie, of that I have no doubt whatsoever. 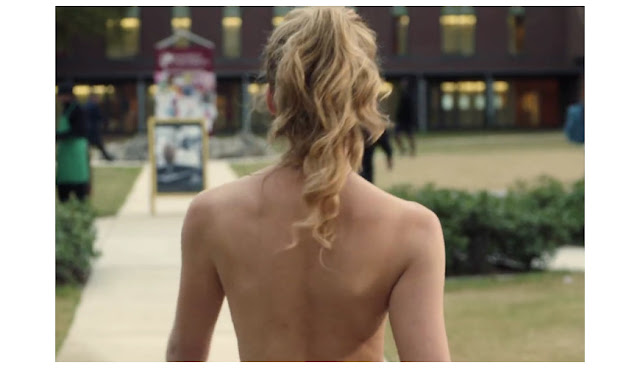 Hints of that problematic movie can still be seen in this version. The movie has a scene where the main character goes for a walk naked, for no reason whatsoever. It is superfluous and sleazy, and I am certain it is a survival from the first, Lobdell version of the script, from before any rewrites started.

The movie is directed by Christopher B. Landon, who came out as gay in 1999, unafraid of his sexuality harming his career potential. ThisisInsider.com says he was brought onto the movie eight or nine years ago to rewrite the original script. In my head I attribute the good bits to him, added during this rewrite, and the bad stuff to the original version by Lobdell. For example, Landon added in a romance to humanize the self-centered and stuck-up main character. I have to wonder, what kind of movie was the original script intended to be, without this vital element?

Thankfully, the script got rewritten and the movie got made, and it stars Jessica Rothe as Theresa “Tree” Gelbman. Tree is a college student who is murdered on her birthday and begins reliving the day over and over again. As soon as she works out what is happening to her, she sets out to find the killer and stop the loop. Tree starts out being self-centered, dismissive and condescending, until she is murdered by a hooded figure wearing a mask. Tree knows she is in a time loop but whatever she does to avoid her death, even barricading herself in her room, she is murdered again and again. She also learns she is retaining damage from her numerous murders and is growing weaker.

Happy Death Day still shows signs of all the conflicting forces and genres that went into its making, but it has turned into a good movie. It is a dark movie that puts a sci-fi spin on slasher conventions, and adds a generous dose of action. Jessica Rothe has so much scene presence she sells all the strangeness, and there are plenty of laughs between the horror and action sequences.
Labels: Horror Movies review