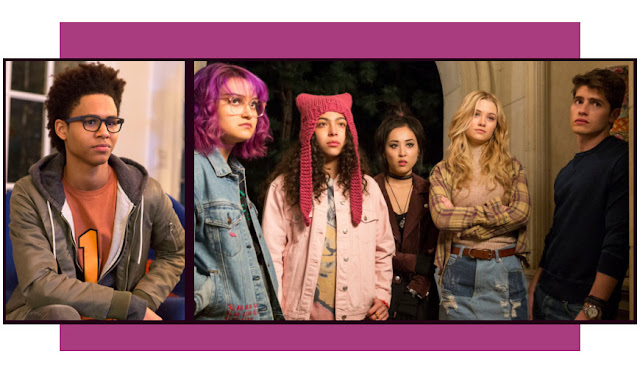 I wasn’t super confident about the Runaways, probably for no better reason than because the Netflix superhero shows have been misfiring recently, including Iron Fist and The Defenders, which I enjoyed but which could both have been better. And a more direct rival, The Gifted, was also a little underwhelming.

“What chance have HULU, of all people, got of getting this right, where others have failed?” I thought. There was never any question of my doubts actually preventing me from watching it though. The combination of superheroes and a dinosaur is just too good for me to pass up. 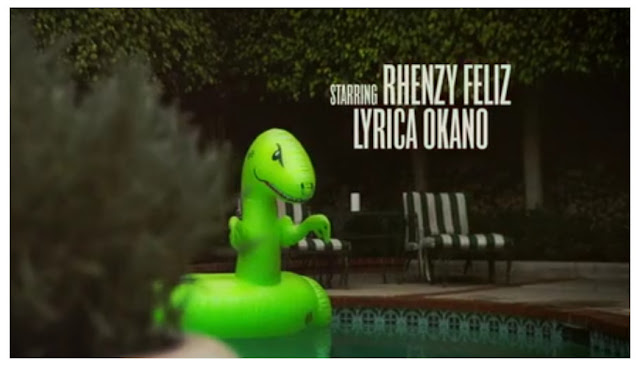 I sat down with a coffee and a sandwich, and my hopes started to be raised right from the start. I got the feeling that this show was going to be good. I think it was the credits that started to build some goodwill. It has those cool type of credits that sum up the show, but also are their own work of art in and of themselves, like the credits for True Blood. In the opening montage, I saw palm trees, pools, McMansions and concrete, typical L.A. images to my mind, but interspersed with these scene-setting images were hints about the magic, mystery and superpowers to come. The one that caught my eye was the inflatable dinosaur in the pool. If you know nothing about the Runaways, you’ll most likely miss it, but if you do know a little about this superhero team, it is a statement of intent. It says, yes this team has a dinosaur, and yes we are going to give it to you... on a HULU TV show budget. The audacity of it certainly made me smile.

Another thing I really liked is that the show passes the Bechdel test and is super diverse. To me, seeing both these elements in place is a badge of quality. It means the writers are aware of what is going on in popular culture right now, and they are into it.


Once the credits are over, we are introduced to our team of diverse superheroes one by one, and a little of their backstory is sketched in. A lot of this is done visually, the images of the credits continuing into the show itself. We see Jules Verne’s Journey to the Center of the Earth being read by a kid on a bus next to his dad at night, according to NerditHereFirst, probably foreshadowing where the final confrontation between the good and bad guys will take place.

Then we see a poster for the movie Pi on the wall of the bedroom of the young man who brings the team back together. Then we go to a young woman, hanging a pentacle round her neck and putting on makeup. Another young man comes next, with a close up of a catcher’s mitt as he does weights.

The parents are introduced with visual cues in the same way. There are red robes, a weird figure in a bed wearing a gas mask, an ultra-modern house, a mysterious transportation device, a basement jungle, and much more. It is very speedily established, almost instantly in fact, that the parents are a very sinister bunch. But they act like friendly suburbanites, concerned to give back to the community, and drive ecologically sound vehicles.

There are so many cool elements to the show. There is the witty dialogue, such as one character saying to another that having shiny hair doesn’t automatically give her moral authority. And the kids’ phones are characters in the show, and in their lives, with plot points being delivered by text, just like Pretty Little Liars and Gossip Girl. The sound of multiple alert tones is always ominous in this show.

It takes a little while, and it is very understated, but when the first use of powers comes, it is triggered by period pain. I loved how subtle it was, a very private experience for the kid developing the powers alone. I decided I should know who was doing this writing, so I typed in a little Google search and found out that Runaways is being created for Hulu by Josh Schwartz and Stephanie Savage. They focus on character rather than plot, and that is a conscious decision.

Schwartz admits that on The O.C. they struggled to come up with enough story to last an entire series. Refocusing on character rather than plot seems a very good idea, and undoubtedly audiences are ready for it, thanks to the slow pace established by Netflix shows like Dare Devil. It’s sower paced, but Runaways resonates with everything Schwartz and Savage have worked on before, including The O.C. and Gossip Girl.

I’ve watched three episodes and I’m having fun with this show. I was even in two minds about whether I should write something about the Runaways, because inevitably I’ll end up doing lots of research, learn all about what happens in the original comics, and end up spoiling myself for all the twists and turns to come.

I hesitated for, oh about... all of twenty seconds before going to Wikipedia, which is a treasure trove of information about the Runaways comic book. It is published by Marvel, and it is about the same group of teenagers from the show. Just like in the show, they discover that their parents are part of an evil crime organization. It started in 2003, but was then canceled in 2004 at issue eighteen. Marvel revived the series in 2005 because it was selling well in trade. In comics, a trade paperback (usually shortened to trade) is a collection of stories reprinted in book format, usually containing one complete story arc from a single title.

The kids steal weapons and resources from their parents, and learn that they have inherited their parents' powers. They are portrayed as a somewhat dysfunctional yet loving family. The series was canceled in 2009, a common hazard in the world of comic books, but the characters have been seen in other comics.

The team was intended to attract new readers, particularly young readers and the manga audience, to Marvel. I’m thinking that the combination of a team created specifically to be interesting to a younger audience, combined with the same sort of witty writing to be found on Gossip Girl, has created a surprisingly good mix.
Labels: Marvel TV