Stranger Things is a love letter to the 80s based around a young boy vanishing into thin air. As friends, family and local police search for answers, they are drawn into a creepy and atmospheric mystery involving top-secret government experiments, terrifying supernatural forces and a very strange little girl. Season 1 of the show has a score of 96% on Rotten Tomatoes, while Season 2 has the slightly lower score of 94% on the same site. Looking at those scores, you might suspect that season two does the same things as season one, but slightly less well, and you would be right.

What Stranger Thing does not do is plot, and Season 2 is no different. The plot basically boils down to keeping the kid called 11 away from the big bad, until the last episode, when she comes in and kicks its ass.

Another thing this season did not do well was address the fallout from the season before. The citizens of the small town of Hawkins have pretty much adjusted to the horrors of the demagorgon and some even have friends up at the lab it emerged from. Apparently the “bad people” have left the lab now, so it’s okay to just wander in and shoot the breeze with the scientists inside. Everyone is just getting on with their lives as if nothing ever happened.

The pacing was off as well, with the early episodes dawdling along with everyone staring at pumpkins and scratching their heads, followed by some episodes where everyone is wandering around or drawing tunnels, and then wrapping up with two episodes of frenetic and deeply predictable action. 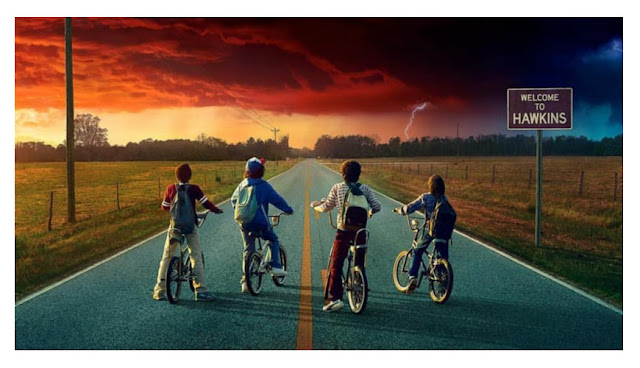 So, if Stranger Things 2 does all these things so badly, why is its score so high? That’s because, the things it does do well, it does very well indeed. What Stranger Things does is nostalgia and atmosphere, and it is this that makes the show so enormously enjoyable.

The first episode starts among the nostalgia of a video game arcade, and is centered round a game called Dig Dug. As Mashable explains, Dig Dug is a classic video game that hints at the Upside Down tunnels that play host to weird tentacled things. In the game, players control a character called Dig Dug, who digs into subterranean tunnels and defeats the monsters within. In the final episode, Mike, Lucas, Dustin, Max, and Steve enter the tunnels to lure the Demo-Dogs away from Eleven and Hopper, some of them decked out with handkerchiefs and swimming goggles. These swimming goggles are a reference to one of two monsters found in the game. It's a small nod to the classic 80s game that most people will miss. As Eleven is using her powers to close the gate between Hawkins and the Upside Down, the giant monster unleashes a gout of fire. That burst of fire is a reference to the fire-breathing attack used by monsters in Dig Dug.


As Jalopnic points out, cars are another way Stranger Things provides that hefty jolt of nostalgia. This includes my favorite, a sleazy 1978 mobile-lounge Chevy Van. Probably the most notable car is a Chevrolet Camaro. This is the new bad kid’s car, and he tears ass in it all over the place, roaring mightily and with some serious bravado. There is also a Toyota Van that belongs to an investigative reporter, and is just a thing of beauty. Tellingly the Jalopnic journalist who provided the details to go with what I just saw as cool cars says in the article:

I think the first season may have been a bit stronger overall, but I enjoyed season two, and the car-casting game was as good as ever, which is really about half of why I watch anything on television at all, if I’m honest.

Suburban architecture, as elle decor details, is another route to nostalgia that the show explores. The show returns to the terrifying locations of the 1980s, recreated in contemporary Georgia. The lab that houses the rift to another dimension is really the old Georgia Mental Health Institute, a former psychiatric hospital, for example. The houses are gorgeous examples of suburban modernism and there is fake wood, floral-patterned wallpaper, lots of brown and other earthy shades, especially gold, and plenty of avocado green.

As Variety writes, the sounds of Kyle Dixon and Michael Stein have grown even scarier as the show that they score has grown stranger. They incorporated more traditional horror instruments, like the vibraphone, and blended them into electronic sounds. They also incorporate the concept of “uncanny valley” in much of their songwriting for the show: Dixon says:

It references robots and AI. There’s a point when something looks so real and sounds so real, that it’s almost convincing, but there’s something fundamentally not right about it and you can’t quite tell what it is. It’s not human, but it’s so close to being human that it scares you. Sounds that are almost human, or kind of like voices or a baby crying or an animal, but a bit weirder … those end up making some of the scariest songs.
Labels: sci-fi TV