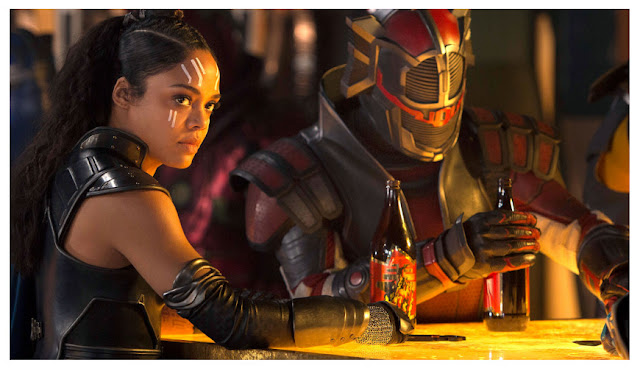 I watched Thor: Ragnarok the other day and I loved it, just like most everybody else. Thor, the hammer-wielding God of Thunder, starts the movie dangling in a fire giant’s cave in some inferno dimension, then spends time on Asgard and Earth, but spends most of the movie on a planet called Sakaar. I watched it in Italian and the humor came through in the translation very well. As io9 says, Thor: Ragnarok is the funniest Marvel movie to date. From start to finish, it’s an epic, sweeping space adventure with appealing characters that will leave you absolutely giddy.

Valkyrie for example, played by Tessa Thompson, is an absolute highlight of the movie. She has the swagger and hard-drinking ways of an action hero, combined with a mystical backstory to explain her world-weary attitude, and her potential for redemption. Thor: Ragnarok simply comes alive when Valkyrie is on screen.

It’s an awesome movie, and it has one more trick up its sleeve that made me love it even more. The design sense of Jack Kirby is embedded into the very fabric of this film. 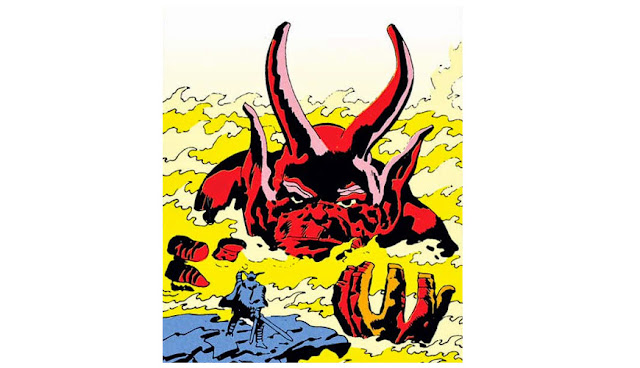 A lot of the coolest elements of the Thor comics were designed by Kirby, including Surtur the fire giant, the unstoppable creature that actually brings Ragnarok. 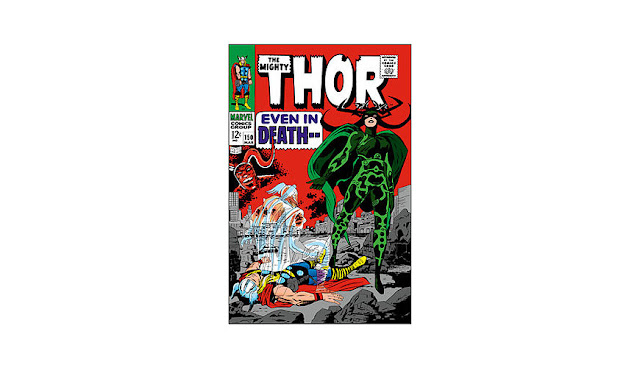 He also designed Hela, the Asgardian goddess of death, ruler of Niflheim, frequent foe of Thor, and also Thor himself. Thor was designed by editor Stan Lee, scripter Larry Lieber, and penciller Jack Kirby, based on the Norse mythological god of thunder.

This all happened back in the early 1960s, and that fed through into the art. The art of Jack Kirby is very idiosyncratic and recognizable, and bears the stamp of its time to boot. One of the triumphs of the movie, on top of the humor, action, character arcs, special effects and performances, is how it leaned into stamping Kirby’s look onto the movie, and bringing it off so successfully. This is thanks to director Taika Waititi and his cinematographer Javier Aguirresarobe, helped immensely by Mark Mothersbaugh’s score.


Transferring Kirby’s visual storytelling and incredible designs to screen is a triumph. His images were full of rich detail to immerse the reader in the story. His hallmark was stylized technology with his intricate stacks of repeating shapes and snaking pipes. Kirby’s detailed futurism was worlds away from the stark lines of most science fiction art of the time. He could turn a single oversized panel into the kind of vivid world that comics readers could gaze into for hours, stuffed with weird figures and machines.

All Kirby machines begin with two or three large shapes arranged to simply convey the object’s meaning. A laser cannon starts with a tube and a base. Any communication device will have an exterior antenna and a pseudo speaker. I’ve seen Kirby put a “safety” on a six-shooter where none exists simply to put his point across. The final step is to embellish it with small shaped patterns that suggest a feeling. For instance, an evil machine may have lots of sharp edges and hard designs. It might also be very dark (with lots of blacks). On the other hand, a benevolent machine is smooth, with rounded edges and light in color. Devilishly simple, this concept continues to elude many artists. 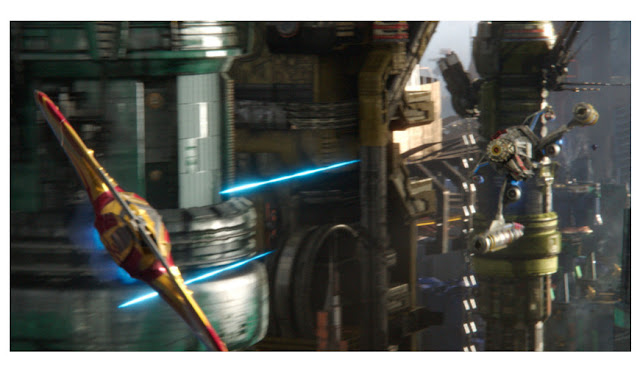 Kirby’s spaceships aren’t necessarily streamlined, and they don’t have to be symmetrical either. They aren’t just jet fighters transposed into the future. They can be a collection of boxy elements o webs of open technology held together by force fields and an intricate lattice of pipes. 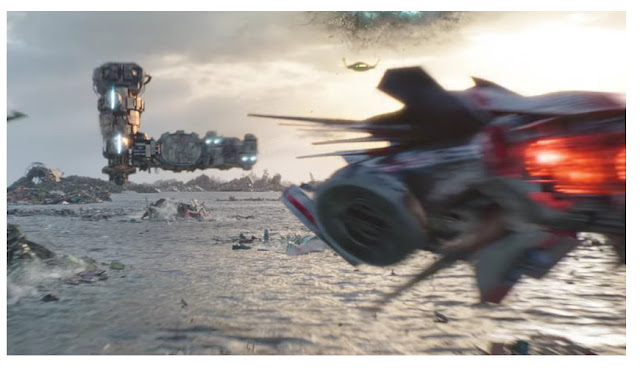 A spaceship might be tall, wide with huge doors or have strange shapes attached to it, like the one in the foreground of this movie still. They are probably something like repulsor plates that lift the craft into the air, and then the engines on the back propel it along at breakneck speed. This spaceship, an original design by Kirby, seems to have the same basic structure, with circular repulsor plates and protrusions at the back that might be engines. It’s a much bigger, more ponderous design than the relatively swift craft seen in the movie, but they undoubtedly share DNA.

The features of his robots do not necessarily correspond to those of a human face, though the bodies are usually anthropomorphic enough. There is a scene mid-way through the movie where Valkyrie pays a robot bar tender. He has a face with six glowing eyes that echoes a famous Kirby design, but not the design of a humble barkeep, this creature is much bigger and much more dangerous. 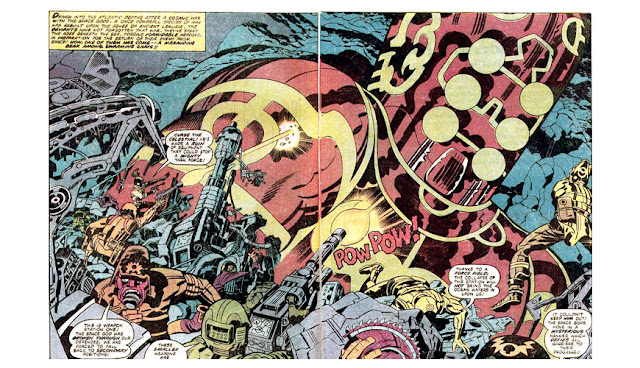 This monster, an entity the size of Godzilla, is a Celestial named Eson. Many species across the Marvel universe have legends of the Celestials’ beginning, none of which have been confirmed.

At the beginning of creation itself, countless billions of years ago, a single sentient intelligence appeared, named The First Firmament. For countless ages, the First Firmament was the sole being in creation-until its loneliness became unbearable. It decided to create servants, cosmic beings of a lesser order of power. These included a group of multicolored humanoid entities whom one day would be called by lesser life forms The Celestials. I’m not a hundred percent sure how I feel about their iconic designs being used for inspiration for background characters on a junk planet where gladiatorial games is the apex of their culture, but in a fun movie like Thor: Ragnarok, I guess I’m okay with it. 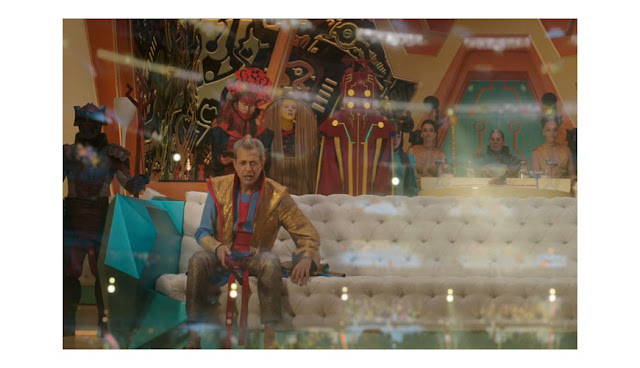 In my head canon, these are fashions inspired by the monsters of the strange and unknowable world these characters inhabit. They are not the Celestials themselves, obviously, just worshipers dressed that way to honor them. Anyway, if this article hasn’t spoiled it too much, and if you haven’t seen it yet, go watch Thor Ragnarok, it’s great.
Labels: Marvel sci-fi movie