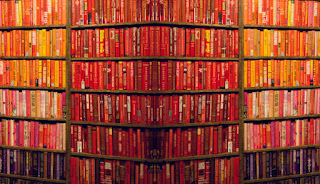 A couple of days ago, the book aggregator that distributes my books to Kobo, iBooks and Amazon, among other places, sent me an email. They are called Draft2Digital, and I use them for the vast bulk of my ebook distribution. They were writing to keep me in the loop about future strategy. I’m sure it wasn’t just me they were writing to, of course. This was undoubtedly an automatic email sent to every single one of the people whose ebooks they are distributing, but it is interesting.

The company has a site where authors upload their books, to have them distributed and monetized, the Draft2Digital site, but they have also added another site called Books2Read. This site is intended to be a place where books are promoted and discovered. And this is the essence of making money with ebooks. This is the difficult bit, actually getting your book discovered, getting it in front of the eyeballs of somebody looking for their next hit of - in my case - ripsnorting sci-fi action. I was extremely interested to find out how they intend to make this happen.

Apparently, according to the email they sent me, the strategy is to focus even more strongly in 2018 on Draft2Digital’s efforts to address the ongoing challenge for authors of how to market their work and improve reader discoverability for their books. So far so good, they are obviously aware of the problem and they intend to do something about it, but what?

Their strategy, the email says, is centered on Books2Read, where they intend to iterate and innovate new tools and resources, and continuously improve the service. That sounds promising, and having a domain to work with is a good start, but I still was not hearing anything concrete by this stage in the email. Everything is a little vague with exactly what they want to do.

The long-term strategy for Books2Read, they continue, is to provide readers with a platform for discovering new work by independent authors, and to provide authors with a new resource for marketing and promoting their books.

Again pretty vague, but it sounds like they have the right idea. If this is going to work for indie authors the site has to attract both readers and writers, to interact in the same place. It has to be an interesting place for readers to hang out, while offering authors subtle ways to promote their books.


Over the course of 2017, Draft2Digital focused on improving on existing services, and expanding into new sales channels, which meant Books2Read languished a little. D2D introduced dozens of new features and improvements to its publishing offering, which is great for authors and distribution, but now the focus looks like it is shifting a little more to discoverability.

They say that in 2018, their development time and resources will take aim at improving and growing Books2Read as a book discovery platform, and making it the marketing resource that indie authors truly need.

At the end of the email they say:

Keep watching your inbox as we make 2018 "The Year of Discoverability" for the indie author community.

This all reads more like a New Year’s resolution than a strategy, but I hope they can crack this conundrum. How to match readers of specific genres up with the authors who are writing it, and making both sides happy seems to me to be the key. It will be a difficult balancing act, but if they achieve it, the rewards will be potentially huge.

I think it might take them a little time, though. Right now when I go to the Books2Read site, I just see a confusing mass of text, talking about the esoteric charms of universal book links. Thus is clever technology, but readers aren’t interested. Books2Read needs to keep doing their special links, but they need to hide the clever code away under the hood.

And there isn’t a single book cover or word about the different genre’s of books to be seen. I think people should at least be offered different genres. Somebody coming to a book site looking for a book on photographic techniques is going to want something different to somebody coming for romance, which is different again to sci-fi, which in turn is different to fantasy. (Just as an aside, I hate bookshops the lump fantasy and sci-fi together.) What genre the reader wants is the most important thing about them. In the bricks and mortar world, nobody browses the whole shop, so the challenge is to get readers funneled to the section they want, and the more specific the better.

For example, sci-fi has hundreds of different flavors. Somebody into alternate history and military sci-fi is not usually going to be interested in steampunk. They are more likely to give up and buy a John Grisham if they can’t dig down to the books that actually interest them. And this process of getting to the books that interest them has to happen intuitively, easily and quickly, without too many false positives.

I don’t envy the team the task they have set themselves, it is gargantuan, but rewarding. I have lots of ideas already, and I’m not even involved in the project. For example, I would make sure there is lots of stuff for visitors to do without having to log in to the site. I’d keep intrusive advertising to a minimum and… well, the list goes on. I can only assume that the team putting the new site together are buzzing with ideas. I will be watching with interest to see what starts to emerge from this process. The Draft2Digital site is a dream to use and has improved steadily this year, so I have to say, I think it might end up being something special. So check out Books2Read, and see where it is at right now.
Labels: self-publishing