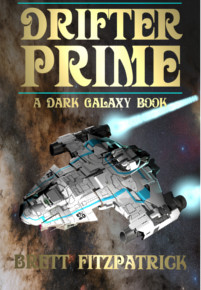 Just a few days ago I got an email from my book distributor – Draft2Digital – telling me that the book sellathon (apparently that’s not a word) called Christmas was approaching, and that if I wanted my latest book to be taking part in that particular maelstrom, (definitely a word), I would have to upload the text file and cover by 11th December.

They are predicting that the flurry of pre-Christmas releases and the special holiday hours at online ebook stores will result in some delays. But they are pretty sure that any changes or listing requests made by December 11th will have a very good chance of getting published before the break.

I got the email about a week ago, and I still had some way to go with Drifter Prime, but I thought that with some hard work I could get the book completed and ready for publication. It’s all done now, and in the immediate afterglow of just having hit the upload button, I’m very happy with the book.

Drifter Prime is book four in the Dark Galaxy series. It marks the end of the first trilogy of books, Galaxy Dog, Iron Dart and Sun Chaser, and the start of a new trilogy that continues the lives of the heroes of the first three books, Knave and Altia.

In the fist three books we saw a rebellion get off the ground, we saw Altia and Knave come together as a couple, and we saw the empire they were fighting become even more corrupt and brutal.
In this book all these themes are still in place and they are becoming ever more complex.

Altia and Knave must now navigate being in a long-term relationship at the same time as being the leaders of a galactic rebellion. The empire continues to become ever more oppressive, in new and entertaining ways - entertaining that is for the reader, not the poor inhabitants of this dysfunctional superpower. Not to be left out, the rebellion also has new challenges: it is time to take their symbolic eleventh planet, a milestone that has become enshrined in the lore of the ancient Tarazet Star Empire as the point when a rebellion stops being one of many and starts to become serious.
We also see new elements come into play in this book that will add new flavor to the series as it continues on into the future.

The artifacts left by the long extinct Drifter culture have been a source of advanced technology to for the humans of various different power blocks, and also for the alien mechanoid threat, the Buzzers. Now it becomes apparent that another power is also using the Drifter artifacts and they are using them against the entire galaxy, not just the Tarazet Star Empire, mighty though it is.
Could this threat be huge enough to unite warring human factions and even the ancient enemy, the Buzzers, against an external invasion. Early indications are not good, but if anyone can lead the fight against the new invaders, it will be Altia and Knave, brains and logic combined with brawn and lateral thinking to make a team that, armed with advanced Drifter technology, can take on any threat the galaxy has to throw at them, and maybe even new threats from malevolent galaxies beyond.

It’s great to have the book out there for Xmas, based on my memories of working in a bookshop in London several years ago I remember how fully half of our sales, or more, for the year came from the period in the run up to Xmas. I was curious to know if eBook sales follow the same pattern, so I went to Google to find out.

PRNewsWire says that the global eBook market is set to reach USD 29.43 billion by 2024, which sounds encouraging. This is primarily driven by the advancement in technology, rising population of educated youth, increasing smartphone penetration across the globe, government policies promoting smart education, free accessibility and eBook reader applications. Fiction books are the largest share of that, and the demand for the genre has been increasing on account of consumer preference for leisure reading.

But none of that specifically mention Xmas. It’s good to know the eBook publishing business is huge, so I can get a little bite of the pie with my sci-fi, but what specifically happens at Xmas. Is it worth the a last-ditch push I put in to get my book published for Xmas.

DebbieYoung says that many indie authors find their ebook sales actually fall in the run-up to the holiday season because so many readers change their book-buying habits. Apparently, instead of purchasing eBooks for themselves to read, they’re busy choosing print books as gifts.

LilyHarlem, if that is her real name, says she has thousands of downloads between Christmas and New Year, but it doesn’t happen organically. She has to work for them.

I just couldn’t find any articles talking directly about an organic increase in eBook sales over Xmas... except one. Andrew Edgecliffe-Johnson The FT said, back in 2011, that consumers then were loading up new e-readers with books after getting them for Christmas, which briefly boosted eBook revenues above those of adult paperbacks in January and February, making them the industry’s largest category.

I also found a technical article on FonerBooks about seasonality in media sales with data from way back in 2005.

As you can see, the Oct to Dec period is indeed higher than the others, but back then in 2005 that was more likely people buying DVDs for presents than high-tech, futuristic eBooks. I’m not even sure Amazon was selling eBooks back then.

It would be great to see an article talking about eBook sales at Xmas in more recent years, years where e-reader sales are actually declining. But until I manage to Google something encouraging up, I will have to depend on the instincts I developed working in a physical book store all those years ago, and they are telling me that Xmas should be a good time to have a new book out. Here’s hoping.
Labels: sci-fi novel self-publishing