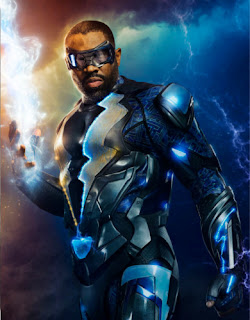 I just saw the first episode of Black Lightning, and I thought it was great. I sure hope this series can keep up this level of writing and acting. The series isn’t perfect, but what series is? It does a lot of difficult things well, and it is never less than entertaining.

The Black Lightning Wikipedia page is full of information on the creative team and development, and it is fascinating. The Black Lightning project was developed by Mara Brock Akil and her husband, Salim Akil. Mara Brock Akil is the creator of Being Mary Jane, while Salim directed Sparkle, so this couple are not people you would necessarily assume would come up with a superhero show.

Black Lightning is hitting screens at a timely moment. Black Lightning actively engages with the problem of racist police brutality. It’s the Black Lives Matter of superhero shows, and it is mature enough to admit that there are no easy answers. The main character quotes Dr. Martin Luther King Jr, saying, “Returning violence for violence multiplies violence, adding deeper darkness to a night already devoid of stars.” But that is not the end of the debate.

“I’m sick and tired of being sick and tired,” his daughter, Anissa, replies, quoting Fannie Lou Hamer. Billie Holiday sings “Strange Fruit” as the episode opens, and there’s a scene where Jefferson is pulled over by two police officers and made to get out of his car into the pouring rain. 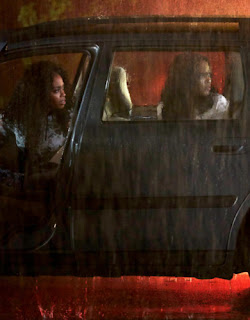 He is then pushed around while his terrified daughters look on in horror. As we expect, he doesn’t fight back, and the police officer dishing out the humiliation grins unambiguously at his discomfort.


The police are presented as racist in a real-world matter-of-fact way. They don’t try to hide their attitude too much, because they don’t have to. This isn’t an exploration of a finely nuanced institutionally racist system forcing good people to act bad, this is a bunch of racist ass-hats delighting in pushing black people around.

Then, later, comes pay back. Two police officers use tasers on our hero, and hurl racist epithets at him. In reply he uses his superpowers to blow up their police cruiser, sending it flying up into the sky in slow motion. It is a cathartic moment, and the show works hard to make us feel it. This part of the show works really well, with the low key special effects looking pretty slick to me.

The rest of the look of the show is good, too. Black Lightning’s outfit is a little Funkadelic, but the actor is so tall and imposing that he sells it. The action works well and the cinematography is great. There is some stuff I didn’t like, but none of it was enough to spoil my enjoyment of the show.

So, the problems...
What brings Black Lightning out of retirement is a little problematic, for example. He doesn’t come out of retirement because he wants to help the local community, he gets back in the saddle because of family. Our hero, Pierce, has a typical TV wife, who is beautiful and likes a glass of wine. His youngest daughter is Jennifer, and she is an annoying teen rebel. Pierce’s eldest daughter is Anissa, is the good daughter, a medical student who also teaches part-time at the school where her father is in charge.

Things really hit the fan when his teen rebel daughter goes to a club, and gets sucked immediately into prostitution and violence, requiring her ass to be saved by pops. There is a little bit of business where she knees a guy in the nuts to show she’s feisty, but mostly she is just a damsel in distress, getting into trouble as soon as she wants to experience something of life. Then, after the teen rebel is rescued, the two daughters are kidnapped again. This time they are dragged right out of school at gunpoint.

These rag-doll characters being dragged from place to place are a weak point, but hopefully they will soon start to get more to do than scream and wait to be saved by pops. In the comics, both Anissa and Jennifer eventually get their own superpowers and become the heroes Thunder and Lightning. Hopefully they will develop a little agency and become more than caricatures as the series progresses. 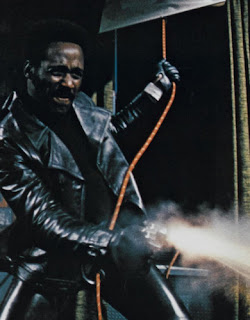 The bad guys, for me, are a little problematic too. They are a gang called the 100, and so far they are just street-level pimps and pushers. They are the sort of criminals you would see in a Blaxpoitation movie. The genre's role in exploring and shaping race relations in the US has been controversial. Some feel the movies perpetuate common white stereotypes about black people. Films such as "Shaft" received intense criticism, not only for the stereotype of the protagonist (generalizing pimps as representative of all African-American men, in this case), but also for portraying all black communities as hot beds for drug trade and crime.

That big bad is an old foe of Black Lightning’s from the comic books, Tobias Whale, played by albino actor/rapper Marvin Jones III. I do not know what to make of the fact that this guy is albino. This character is taken directly from the original comics, apparently, including his albinism. They have been super faithful to the character, even down to his fondness for harpoons. I am going to have to work out what I feel about Tobias Whale, but in the mean time there is a lot to look forward to.

In the final scene we see the good daughter, Anissa, (who comic-books fans know as the superheroine Thunder) accidentally wrecking the bathroom as she gains superpowers. I can’t wait to see what she is going to do with them.


Before we wrap up here, just a reminder that the best way to support this blog is to buy one of my books, so why not go over to Amazon, or Kobo and see if there is one that catches your fancy.
Labels: sci-fi TV