Like the rest of the world of sci-fi nerdom, I am hella excited about the upcoming Black Panther movie. I’ve been reading a lot of vintage British comic books lately, mostly Starlord and some 2000AD, but I can’t resist the urge to throw a little Black Panther into the mix. So where to start?
I started with Google, and I found an article written to help Black Panther noobs like me decide where to start reading his adventures. Early on, the article warns that old Black Panther’s stories are quite problematic for various cultural reasons. I certainly want to avoid stories like that. The article is a useful starting point, but the comics weren’t described in enough detail for me to really decide which one to go with. Ifanboy gives roughly the same information, but gives it in more detail.

IGN goes into a lot more detail about Black Panther. They put together a reading order for the comics that goes from the earliest appearances of Black Panther in the Marvel universe. But their advice for people looking to pick the story up ASAP, is to start with Black Panther Vol. 3 #1. That sounded okay... I guess... but it didn’t grab my imagination, so I kept looking.

I then found some tips from a Comics Vine forum about where to start reading Black Panther.

Ratface, one of the contributors, suggests Aaron's "See Wakanda and Die", Hudlin's "Captain America & Black Panther: Flags of our Fathers.", and Liss's "Black Panther: The Man Without Fear / Most Dangerous Man Alive". I must admit that last one really piqued my interest. Black Panther and Daredevil in one comic book sounded very interesting to me. 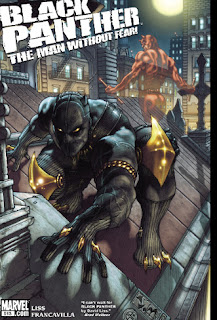 In the end, I started with Black Panther : Man Without Fear, and I’m enjoying it. I have to warn you  that the covers are hideous. The cover of the first issue has Daredevil’s ass as the central visual element. It is a weird, painted monstrosity that looks like it should be on the cover of a title like Teenage Mutant Ninja Turtles. 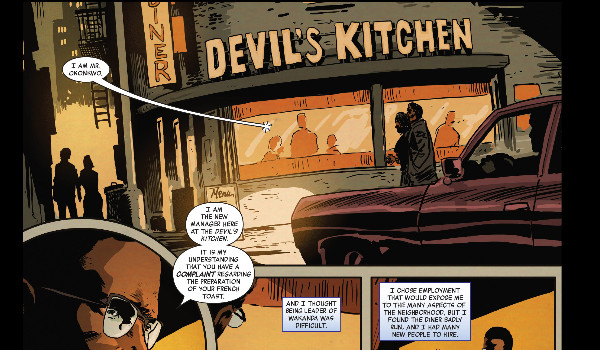 The art inside is much, much better. It is dark and atmospheric, and reminds me a little of Batman Year One. It is done by Francesco Francavilla. According to Wikipedia Francesco Francavilla is an Italian comic book artist known for his creator-owned series, The Black Beetle. Other notable works include The Black Coat (which he co-created) and his recent run on Detective Comics. He is also known for his pulp and retro-inspired style. He ran a blog back in 2013, Pulp Sunday, dedicated to this kind of work. Most recently he has been focusing on The Black Beetle, a series he originally created for his Pulp Sunday blog, which is now being published by Dark Horse Comics. 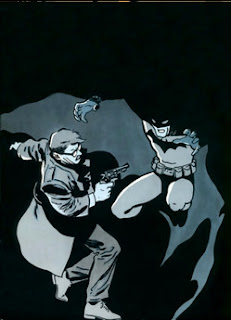 The story of Black Panther : Man Without Fear is interesting, with Black Panther wanting to test himself. He gives up his throne in Wakanda and moves to New York to fill in for Daredevil. He is a street level crime fighter, of the type I enjoy reading about. 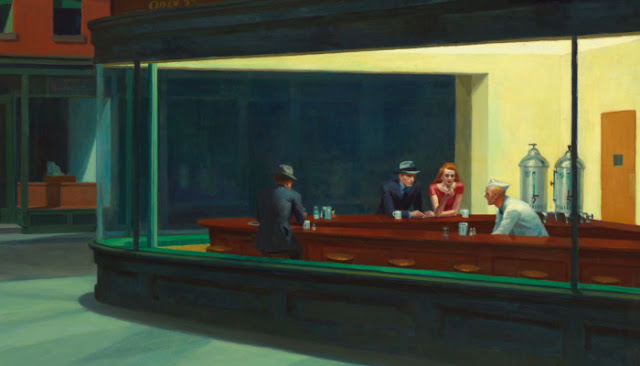 He also starts up a secret identity running a diner that is called Devil’s Kitchen and looks a little like the one from the Nighthawks. It’s a little like 2 Broke Girls for a moment. Of course, 2 Broke Girls is a sitcom set in the Williamsburg neighborhood of Brooklyn, New York City. Thankfully, he is soon back out on the street, fighting crime.

When he isn’t fighting crime, Black Panther chills in his apartment, with the beautiful art contrasting the warmth of the space with the cold colors of the mean New York streets outside.

I got a shock a few pages later when I saw that Black Panther was skyping with Storm. They are married in the comic book. It shocked me so much I had to go and Google up their story before I continued reading. I found the story of Black panther and Storm on Arousing Grammar. Apparently their marriage lasted six years and one month.

This being the start of the arc, the bad guy is introduced in the issue, too. He seems interesting, with superpowers akin to those of Captain America, without the morals or interest in doing good, of course. He’s called Vlad the Impaler.

It’s a great first issue for this story, and I can’t wait to find out how Black Panther takes out this Vlad guy.
Labels: Marvel