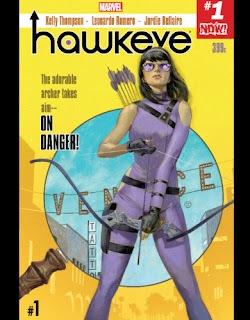 I’m reading the new-ish Hawkeye and it is great. It is a comic about a female hero, written by a woman, which is why I specifically searched it out. You see, the reason I started reading this incarnation of Hawkeye is that the other comics I’m reading are a little problematic. They are high quality, but lacking in some important areas. What I’m mostly reading is back issues of 2000 AD and Black Panther: Man Without Fear, which can be a little macho and non-Bechdel Test compliant. In fact, in the case of the vintage 2000 ADs from the late 70s and early 80s there can be entire story arcs without a single female character, apart from a secretary or a background character or two. 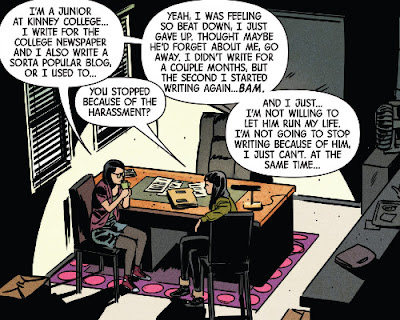 Hawkeye is a different beast. The first issue starts from an online harassment storyline, where a female blogger is receiving threats and abuse. It rapidly develops into something even more sinister than that, but the way the initial plotline is handled is great. Both the client who is suffering the abuse, and Hawkeye herself immediately understand that online threats are to be taken seriously and are a big deal.


The threats are understood as just part of the work of a female blogger, and they go about trying to solve the problem. This one plot is already making this comic an important, healthy addition to my usual diet of macho action comics. 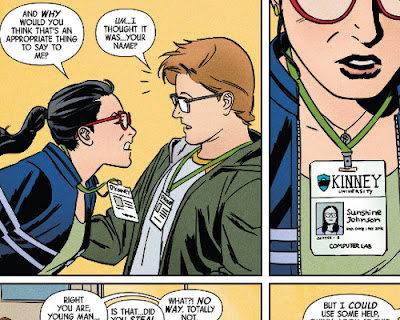 It’s not preachy about these gender issue though, it has fun with them. Like Hawkeye’s reaction to being called sunshine. It turns out this is the actual name on the lanyard she stole to access a university computer room, so the guy calling her sunshine wasn’t belittling her, and she has just blown her cover.

It also turns out that, like a lot of the more kicking-ass-oriented heroes, she’s no good at computers. She quickly recruits the guy from the university computer room, and we are well on our way to building a Team Hawkeye. 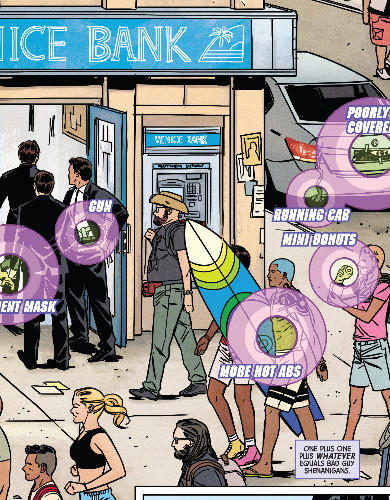 There is great visual thing the comic does, where we are shown what Hawkeye notices. Each item she sees and registers as important is ringed in Hawkeye purple and labeled, and this gives a hint of why this character is special. 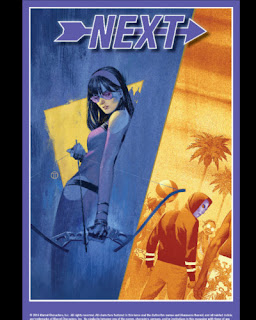 Other plus points in the comic’s favor are a Spider Ham graffiti on her office building wall, which is super cool, and a cool 60s vibe to the comic covers. The comics look like the Man from Uncle, and the stories inside are knowing, hipster, woke, entertainments. The two work surprisingly well together. Those old shows always had a lot of humor to them, which Hawkeye is continuing, but with an updated feel.

The comic book doesn’t go into her backstory much, which I’m thankful about, but for those who are curious, Hawkeye is the daughter of a rich publishing magnate. She was attacked and traumatized. She then fixed herself with expensive therapy and intensive physical fitness and self-defense training. At her private school she studied archery, fencing, kickboxing, and various martial arts.

She is super cool, and a list of the tropes involved in her story is as long as your arm. Io9 spoke to Hawkeye writer Kelly Thompson to discuss where Hawkeye is headed in Marvel’s comic universe. She describes the comic book as Veronica Mars with superheroes. She says Hawkeye will be taking on P.I. cases but she’s a superhero first and foremost.

I'm just starting in, but the comic was canceled at issue #16 so, knowing this, it will be a little like reading a miniseries for me, rather than an ongoing series. I’m looking forward to seeing where this story goes.

Kelly Thompson, is also writing a comic book called Rogue & Gambit (a five-issue miniseries) and, according to CBR, she isn’t going anywhere when Hawkeye ends. She has signed an exclusive agreement with Marvel Comics, which she says is a dream come true. Word of Thompson’s next projects at Marvel should come in the next few months.