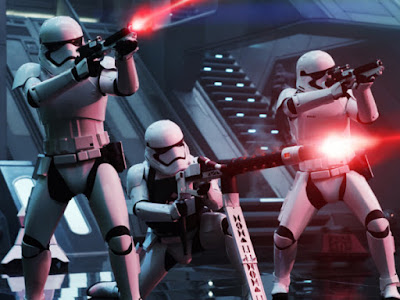 My blog posts are usually just a bunch of carefree escapism and sci-fi shenanigans, with occasional angry barbs at Trump sprinkled in. This post is not like that. It is a lot heavier, and deals in part with my thoughts on a very disturbing subject. It deals with gun violence in the USA. Now is the time to click away if you are not in the right frame of mind to handle that today.

There has been yet another gun tragedy in the USA, in Parkland, Florida. Naturally, there is a lot of conversation right now about what caused it, including the shooter’s mental health, and his radicalization by the alt-right.

The USA’s gun laws have also been much discussed, except by the President, who truly does not seem to me to care that this happened within a few miles of his own holiday home. Working to justify the over $30 million from the NRA he was bunged during his presidential campaign, he swiftly went into action to try to confuse the debate taking place after the shooting. Of course confusion is Trump’s natural state, something he is truly good at. His first intervention was masterful, in an idiotic kind of way.

The first move in his spoiling tactics was to say crazy stuff about giving guns to teachers. The idea is so preposterous that it inevitably dominated news coverage for days. But the media-savvy kids, the survivors of this school shooting, who are fighting him and his paymasters at the NRA, managed to get the news coverage back onto gun laws.

Trump, while floundering around for something else to blame, other than the USA’s lax gun laws, then attempted to resurrect the old chestnut of talking about gun violence in the media. According to Forbes, Trump suggested that violent movies are the real culprit when it comes to school shootings.

In his confused and confusing way, he suggests a ratings system for movies, despite one already being in place. This whole line of reasoning has all been proved to be wrong-headed, of course, although when has that had anything to do with the formulation of GOP talking points? The Forbes article I link to does a good job of yet again debunking Trump's ramblings, so I won’t bother here. I will just quote one sentence of it:

Researcher Dr. Christopher J. Ferguson says, "speaking as a researcher who has studied violent video games for almost 15 years, I can state that there is no evidence to support these claims that violent media and real-world violence are connected."

The regular reemergence of this particular spoiling tactic is gaining less and less traction with the public and with news outlets, but it does still hit home with me. I find myself thinking about it because I write books with guns in them. Not every book I write has guns in, but my sci-fi books do.


My sci-fi happens to have a lot of guns in it. The sci-fi I write could be described as space opera, which is how I often characterize it, but some of the books, especially the first one “Galaxy Dog”, veer heavily in places into the territory of military sci-fi. This was not a conscious decision, more a reflection of the sci-fi I grew up with. Star Wars is full of guns, for example, as is the British comic 2000 AD, which had a huge effect on me when I was growing up. There are traditionally a lot of shootouts in the sort of sci-fi I saw and read in my formative years. A lot of gunfire is featured, where the number of shots fired seems inversely proportional to their likelihood of killing or even wounding anyone. Heroes and villains can expend enormous amounts of ammo from automatic weapons at very close range, yet nobody important is killed

It’s not that the bullets or blaster bolts aren’t potentially lethal, but everyone’s accuracy is so horrible that they seem to hit everything except their target, even in situations where it seems to be almost impossible to miss. The heroes in sci-fi fiction can stand in the middle of a firefight, without cover, and never get hit, while they themselves can pick off any bad guy with even the most casually-aimed shot. Sci-fi has the added complication that often, at least on TV, the ray guns used are actually much less harmful to be struck by than a regular bullet would be. Important characters rarely ever actually get wounded when they get shot.

In my books, characters have powerful personal armor that means they can be shot multiple times with relatively few ill effects. Just like in Star Wars, my books have an awful lot of guns being fired off by bad guys, minor characters, and also most definitely by the heroes. I suppose it's done because it is exciting and atractive, aesthetic, in other words. Some see this as somehow, wrong. If the use of guns is presented as more realistic, this line of thinking goes, it is somehow less harmful or bad. But I disagree. I do not try to avoid the aestheticization of the violence in my books.

There are directors, like John Woo, who create balletic set-pieces of violence, and who are criticized for it, but I think this is just a more subtle way of accepting some merit in Trump’s spurious and idiotic arguments. In fact I suspect it is realistic depictions of violence that most interests people with an obsession with guns and a proclivity to use them. In the book, Jarhead, for example, the writer talks about consuming all the war films he could before going off to fight, the more unsettling, and anti-war themed ones just as welcome as the brainless action fests, if not more so.

It is hard of course, sometimes, not to give in to the spurious connection between guns in entertainment and in real life. I saw in Variety that the Django Unchained and Jack Reacher premieres were canceled after the Newtown school massacre, for example, and it is hard to blame them. A more recent article about guns from the Chicago Tribune talks about the moment in Black Panther when Danai Gurira’s character is visibly disappointed with the world outside her advanced African nation. “Guns,” she says. “So primitive.” The journalist thinks these are times when movie slaughter, and extravagant, adrenaline-pumping shootouts, cannot easily be enjoyed. Again it’s a sentiment that is hard to argue with, right now. But I think we must, or we risk falling into the trap se by the NRA and Trump. Blame movies, not bad laws.

We’ve been here before, of course, with criticism of violence in the era of American film production before the enforcement of the Hays Code in 1934. This was a period when gangster pictures and prison films were hugely popular. Scarface was the most controversial and violent, and took nearly a year to reach theaters due to battles with censors. It outraged civic leaders who felt that it, and movies like it, were glorifying the lifestyles of criminals.

Scenes where criminals aimed guns at the camera were considered inappropriate and removed, along with images of guns pointed at the body of another character, shots of machine guns, and scenes where criminals shot at law enforcement officers. Sadistic violence, and reaction shots showing the faces of individuals on the receiving end of violence were considered especially bad.But when we look back on this period, nobody blames movies for the violence in American cities.

The discredited talking point of violence in art having any effect on levels of real-life violence will undoubtedly be trotted out in the future by some dissembling recipient of NRA cash, but I will continue steadfastly ignoring them and arguing against it - pew, pew. I want the focus of the USA media’s attention to stay on the real problem, the NSA and the gun laws they pay to have put in place.

Before we wrap up here, just a reminder that the best way to support this blog is to buy one of my books, so why not go over to Amazon, or Kobo and see if there is one that catches your fancy.
Labels: Sci-Fi Worldbuilding