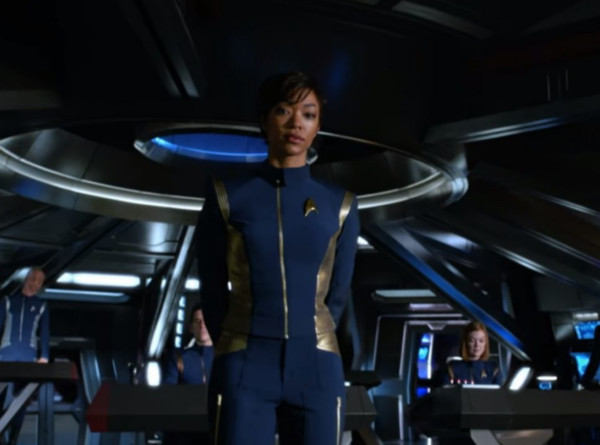 Star Trek: Discovery’s first season has come to an end, and therefore it is at last time for us to make our minds up about whether it is a worthy continuation of the Star Trek tradition. In order to do this, of course, we will have to delve into plot twists and examine all that happened, so be warned, here be spoilers.

Star Trek: Discovery, as you undoubtedly know unless you have been living under a rock, is the first Star Trek series to grace our screens since Star Trek: Enterprise. It is set roughly a decade before the events of the original Star Trek series and follows the adventures of the crew of the spaceship, USS Discovery. Sonequa Martin-Green stars as Michael Burnham, a science specialist on the USS Discovery. Unlike the central roles of previous Star Trek series, she is not the starship captain. Through her eyes, we get to see more of what happens aboard the ship, and we see it from a different angle.

I last wrote about Star Trek: Discovery when only two or three episodes had been broadcast, which I felt was too early to say for sure what this show is going to be, and boy was I right about that. I was impressed with Michelle Yeoh as the captain of the Shenzhouh. I mentioned that Yeoh chose to retain her Chinese Malaysian accent for the role, just one of the ways the series diversifies its cast. I liked how this choice gave her complexity and also gave her a certain authority, to my ear, like a diplomat from the UN. I was perplexed that such a developed and interesting character would be killed off, never to be seen again, but now we know that she comes back, in a different form. 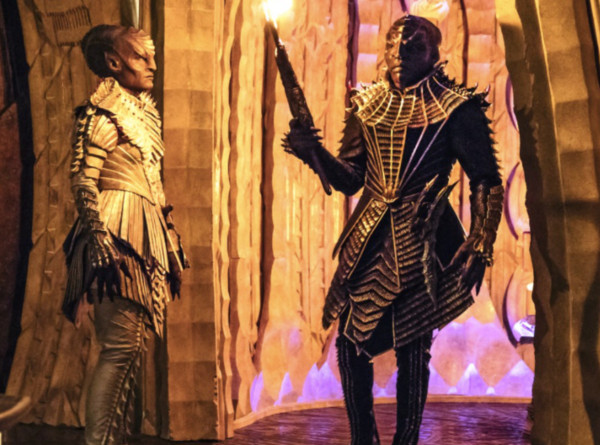 I also liked the Klingons from the very beginning. They wear sculpted waistcoats like Elizabethan pirates and actually look alien for the first time, rather than like extras in fake tan, or with bumps glued to their heads. They also have a hint of the styling of the Cenobites from horror movies from a very long time ago. This hint of horror is extended to other elements of their design, such as sarcophaguses (sarcophagi?) being attached to the exterior of their flagship. As the show went on, the Klingons became intimately involved in events, providing enemies for humanity, but also holding up a mirror to them.


I also noticed the design of the Discovery, when it turned up in episode 3, and to a 3D nerd and spaceship designer like me, it was then one of the most interesting things about the show. I liked the very unusual delta shape, based on a sketch by Ralph McQuarrie. The show soon gave me more to focus on than the spaceship, of course. 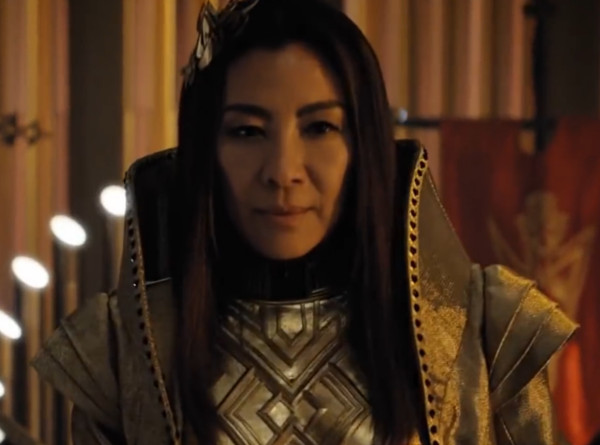 I also liked that the Discovery is described as a science vessel, but the scientists have been press-ganged into the military against their will. This was something I’ve never seen before in Star Trek, especially not on the ship that will be the center of the action. It was obvious even then that this was something different, the real question was whether it was still Star Trek, or was it something new entirely.

Now, with the benefit of hindsight, I can see more differences, but I can also see similarities. Discovery is different, compared to shows that have gone before, in that the show features a single serialized story throughout the first season. But this reflects a general change happening in television. The show is an evolution of Star Trek, but it is also a prequel to the original series so, Discovery is building towards the usual Star Trek ideals of racial unity, peace, the prime directive, and non-violent conflict resolution. These principles aren’t explicit yet, but they are there implicitly, guiding the action.

For example, Bryan Fuller, one of the driving forces behind putting the show together, met with several actors, and said that he wanted the show to be progressive. He looked at all of the roles through a colorblind and gender-blind prism. The series features minority, female, and LGBTQ characters. 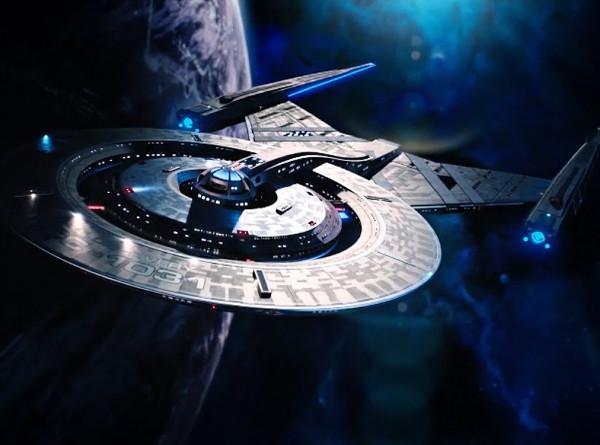 Props such as tricorders and hand scanners, communicators are heavily inspired by their designs in the original Star Trek series. The design of the USS Discovery is based on an unused Ralph McQuarrie design for the USS Enterprise from the unproduced film Star Trek: Planet of the Titans. It has harder lines than a typical Star Fleet ship, but it is no new design, it has history. Even the opening title sequence is intended to be a homage to past Star Trek series as well as an introduction to the more grounded and gritty tone of Discovery. 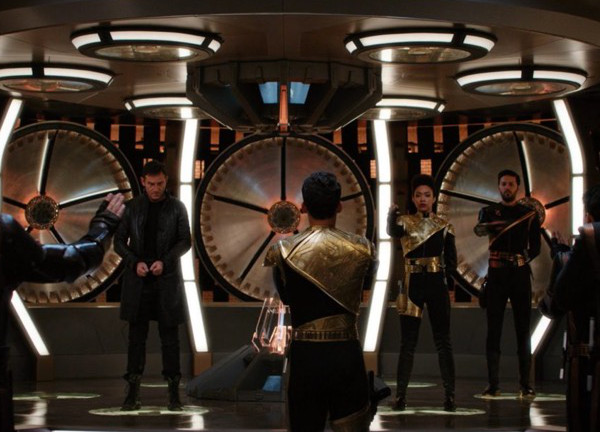 To our modern sensibilities, the idea that all Klingons are simply bad and violent, while all humans are good and compassionate, rings a little false. It is like believing in old stories from the 40s and 50s about brave Western explorers as cultured heroes penetrating a world of savagery. That was how it was understood at the time, but now we know things were a little more nuanced than that, to say the least. The same is true of the brave heroes of the 60s never arguing with each other, fighting bug-eyed monsters and mad gods.

Star Trek: Discovery is something from now. We see the brave explorers, but we see their deeds, as they explore the savage wilderness, with an eye less inclined to look away from their misdeeds.
Discovery is about a complex world, and it comments on its characters’ actions. It spends a lot of time in the Trek “Mirror Universe,” forcing its compromised and complex characters to face the truly villainous versions of themselves that are to be found there. 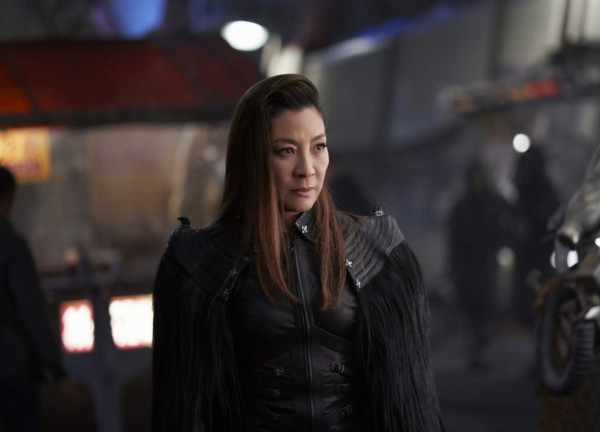 They are comic-book bad guys, like Torquemada and his Terminators, from the pages of 2000 AD. The crew of the Discovery even finds itself contemplating genocide. It’s easy to adhere to Starfleet’s principles when things are going well, but it’s when things aren’t easy that those principles most matter, and when the temptation is strongest to put our core values aside.

In today's modern world, a world of waterboarding and rendition, it is now impossible for us to pretend American values are immutable and incapable of being set aside. A show that extends these insights to shape the way it presents the political organizations of the future is a Star Trek for now.

Most tellingly, the show ends with the appearance of the USS Enterprise, commanded not by Captain Kirk but by his predecessor, Captain Pike. Discovery obviously feels that it has earned its place as a continuation of the Star Wars legacy, and I am inclined to agree.

Before we wrap up here, just a reminder that the best way to support this blog is to buy one of my books, so why not go over to Amazon, or Kobo and see if there is one that catches your fancy.
Labels: sci-fi TV Star Trek: Discovery