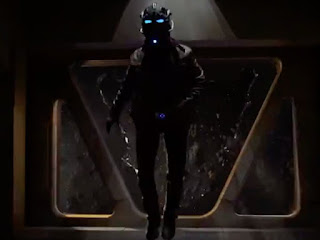 I’ve been dipping in and out of Marvel's Agents of S.H.I.E.L.D. for years. I’ve always thought it was an intriguing show, and fearless in the crazy stuff it has been willing to try over the years, but I’ve never tuned in for an entire season before. In the end, no matter what cerebral concepts it was toying with, I always ended up drifting away. The subjects this show has put on screen have included; a Matrix like immersive computer environment, artificial intelligence, and a trip to a parallel universe. These have all been well thought out and have been done with some very effective special effects but, despite all this clever stuff, there are always large stretches of a season that degenerate into a cavalcade of super-spy tropes. Lots of screen time is given over to a bunch of gunfire and martial arts. I end up watching for four or five episodes in a row, when the deep concepts are being developed, but then I just catch random episodes after that. I can take or leave the episodes that are full of punching, kicking and shooting. I enjoy them too, but it isn’t a big deal to me if I accidentally skip a few. I don’t usually go back and fill in the gaps.

I think my relationship with Marvel's Agents of S.H.I.E.L.D. might just be about to change, however. This season, season 5, which is rumored to possibly be its last, might just have what it takes to hold my attention episode after episode. 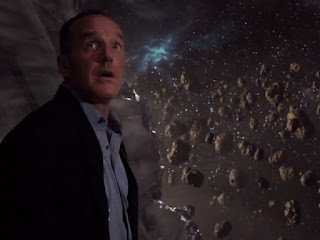 This season, instead of the super-spies genre they usually inhabit, the core team of Marvel's Agents of S.H.I.E.L.D. have been shot into space, in the year 2091.The show runners seem to be going all in on a huge sci-fi setting that the show will inhabit for a whole season, or at least that is what I’m fervently hoping. 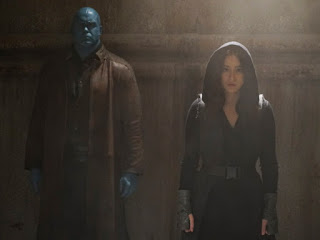 So far I’ve watched only the first three episodes, so the gang might return to Earth before long, but I would be very pleased if they commit to the idea and stay in space for the entire series. All the elements I like in a sci-fi show are present, including corridors,  spaceships, exotic locations – a real exotic location in this case – and aliens.

Actually, a couple of things are missing that would make the whole thing just perfect. There are no robots, for example, and everyone uses martial arts instead of guns when it hits the fan. The bad guys are painted as so irredeemable that it doesn’t make much sense that they don’t use guns. The reason is obviously just that fight choreography is more visually interesting than people hiding behind stuff and taking potshots at each other with ray guns.

It is the lack of robots that I particularly dislike. The technology on show here is extremely advanced, including faster than light travel and killer, anti-gravity marbles, and so robots should be well within the abilities of the cultures shown to create. I guess that’s a budget problem, because there are a few other ways that a limited budget makes itself known.


There are some CGI monsters in the opening episode, and we get to hear a lot of growling, but we see the creature only once. It is bad. It’s legs don’t move right and it is so shiny it looks like it is made out of quicksilver. When it is killed, it pops like a soap bubble and completely disappears. It just looks really cheap, and not in the least scary. 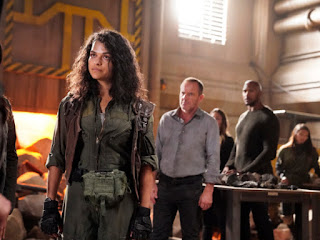 I love sci-fi so much that I can easily ignore stuff like that, after all this is all happening in some very beautiful corridors. The interiors are all very nice. Not always super realistic but there is a bunch of big stuff. 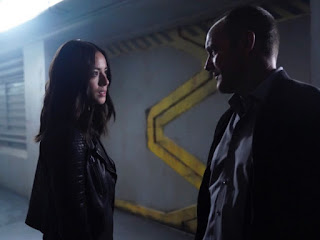 We have elevator doors with teeth that dovetail together, and their are some big areas. Some money was spent on the sets and they work very well. The location of this complex of corridors is pretty cool, too. 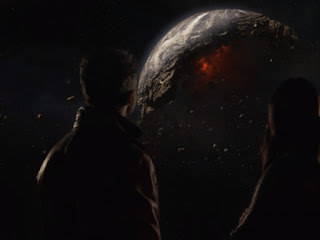 This is a complex built into a chunk of rocky mantle left after the destruction of a planet. The huge chunk is surrounded by debris, which includes a yellow school bust that floats past a window at one pint, because... this is the Earth, but in the future. 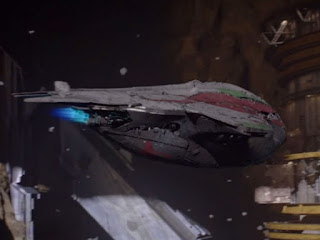 There is also a spaceship, called the trawler, and it looks like a good portion of the special effects budget was spent on modelling and animating it. It is a beautiful model, and quite convincing. It is bulbous and robust looking, exactly as you might imagine a trawler spaceship to be.

The writing is as good as ever, sprinkled with lots of lines that are precision engineered to get a laugh. The characters are great too, having been fleshed out over the previous seasons of Marvel's Agents of S.H.I.E.L.D. before being thrown into this strange situation. This is a modern show that is doing something that is a real throwback to shows such as Space 1999, Blake’s 7, Buck Rogers, and Battlestar Galactica, and I have to applaud it. Of course it is a modern show so it has better acting, writing, sets, special effects, and dialogue.

It is also not held back by any feeling that it needs to strive for realism, as The Expanse is, and the writing is much better than shows like Killjoys or Dark Matter.

The badass characters in Marvel's Agents of S.H.I.E.L.D. are tough in a comic book way, and they are capable of taking on anything a sci-fi universe can throw at them. They are also more interesting than the martial artists and gunmen of Killjoys and Dark Matter, and somehow, to my mind, more representative of what warriors of the far future might actually be capable of.

This sort of space-based sci-fi is difficult to do and it is even more difficult to keep each episode interesting on a TV show’s budget, but I’m crossing my fingers and wishing them luck in finding an audience. I love this sort of stuff and there just aren’t enough shows trying to supply it. Marvel's Agents of S.H.I.E.L.D. has become a full-on sci-fi show, after dabbling with sci-fi for years, and long may it continue.

Before we wrap up here, just a reminder that the best way to support this blog is to buy one of my books, so why not go over to Amazon, or Kobo and see if there is one that catches your fancy.
Labels: Marvel sci-fi TV