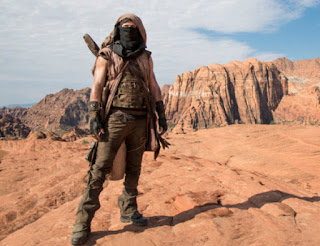 I have just discovered a sci-fi show that is intriguing, to say the least. I’m not going to recommend that you watch it, and I’m even hesitant to give it any publicity at all, but I do want to talk about it. It’s a show called Extinct, with a high-concept premise that is absolutely the sort of thing I love. It combines a post-apocalyptic story with an alien invasion. We see blasted landscapes, crossed by tiny bands of survivors, which appeals to the part of me that likes The Walking Dead, and we also see flashbacks of the fleets of spaceships that created all this destruction, which appeals to the part of me that likes Battlestar Galactica. It’s an inspired combination, and that gives the opportunity for haunting visuals. The show doesn’t often have the budget to spend on haunting visuals, but the opportunity is there.

It’s been canceled now, so it consists of only ten episodes, but they are action-packed. In the pilot, we are taken to a time after the human race has been wiped out by a mysterious alien force. Three humans, Ezra, Feena, and Abram, are brought back to life 400 years into the future by a mysterious drone. The gives them some nanotechnology, which they will have to use keep themselves alive and to save the human race, but first they must find shelter and protect themselves from a mysterious group known as the skin riders led by Ezra's brother Silas. In flashbacks we also start to see how humanity was destroyed during an alien invasion. 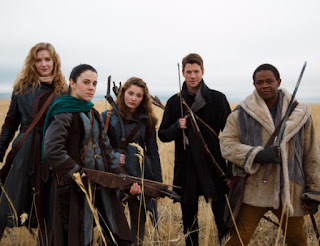 I was quite enjoying it until I happened to read the credits. It turns out that this show was created by outspoken homophobe Orson Scott Card. My stomach lurched as I read that. Card has a fiercely conservative worldview, including the batshit-crazy idea that America's public school system is brainwashing children in order to create an army of Democratic Party voters that he calls the Leftaliban. Yeesh, what a charmer.


Seeing Card’s name on the credits made me curious about the views of the people he was collaborating with, too. The director, Little, has some war films on his resume but his main qualification seems to be the fact that he is a Mormon. Co-writer Johnston seems to have gotten the gig only because he is Card’s buddy. He is a Mormon, too, and he first met Card when he was in the same LDS stake as him in North Carolina.

It turns out that even the TV channel it was shown on is Mormon. The show was aired on BYUtv, which is owned and operated as a part of Brigham Young University, which is sponsored by The Church of Jesus Christ of Latter-day Saints.

The usual content of the channel is summed up on Wikipedia in a way that causes an uneasy smile:

In 2010, BYUtv director of content, Scott Swofford, commissioned focus groups targeting TV viewers who were at least nominally religious, to see what they liked, disliked and wanted on TV. Swofford summarized the results as, "We want to be entertained. Then we'll stick around for the message." This led to the creation of the pilot for Granite Flats, BYUtv's first drama series, which eventually attracting about 500,000 viewers per episode, compared to the previous top-rated show, Love of Quilting, which typically drew under 10,000.

Unfortunately, The Church of Jesus Christ of Latter-day Saints has policies toward LGBT people that have long been a source of controversy, both within and outside the church, and a significant cause of disagreement and disaffection by members. I guess this is why BYUtv decided it was okay to buy this show, which is, remember, co-created, written, and executive produced by virulently anti-gay author, Orson Scott Card. Other publishers have not been so accommodating to Card, including Summit Pictures, who removed him from doing promotion for the film Ender's Game because it feared he would produce only bad publicity because of his anti-gay marriage, anti-gay views. DC Comics canceled plans for a new Superman comic authored by Card for the same reason.

The fact that this show is on this weird channel has other consequences, too. The show features mass graves, a killer virus and evil, inhuman bad guys but BYUtv is a “family friendly” TV channel. This means that Extinct is shot, edited, and acted to make it a lot tamer than most sci-fi TV. The bad stuff shown, including the genocide of the entire human race, is as weirdly bloodless as an A-Team episode. There have been no blood-soaked torture sequences with main characters screaming their vocal chords raw. Everyone is calm and relaxed, while the old-school chill out music and synthesizer honks and squeaks of the soundtrack reassure you that everything will be okay. 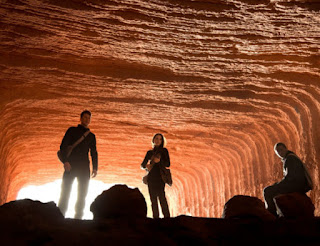 Unsurprisingly the show was filmed in Utah, and this is a plus point because the salt flats and deserts make for a very convincing post-apocalyptic environment. Putting all these influences together, you are confronted with the fact, as a viewer, that this is very much not a normal TV show. It uses D-list talent, at best, and the pacing is uneven. It is strangely bland, and there is not a lot of diversity, apart from a couple of token characters. There are also a lot of heavy-handed allegories of religious belief. Instructions are given as magical carvings in stone, and people discuss the pros and cons of giving over their free will to a force within themselves that makes decisions for them, freeing them from having to decide for themselves, to name just two... and yet, I’m still watching it.

The main characters have intriguing backstories. The motivation of the aliens seems truly alien, and more convincing than Falling Skies, for example. It is a thought provoking sci-fi show, with post-apocalyptic visuals and a claustrophobic setup that combined to give me the shivers. I would never actually recommend problematic dross like this, but I am still watching it, three episode in.

Extinct has, rightly, been ignored by most of the media that usually reviews sci-fi shows. In fact, it had completely passed my by, and I only found it after scouring through IMDb’s list of new sci-fi shows, which is mind-mindbogglingly encyclopedic. There are so many shows on the list that current shows only start appearing round about the 500s, as the first couple of hundred results on the list are only in pre-production, development or post. But I found it, and now you know about it. Whether you actually watch it or not, is entirely another question.

Before we wrap up here, just a reminder that the best way to support this blog is to buy one of my books, so why not go over to Amazon, or Kobo and see if there is one that catches your fancy.
Labels: sci-fi TV