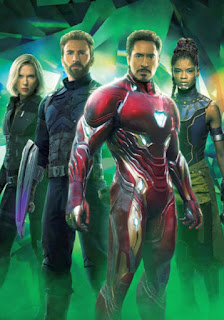 I just saw Avengers: Infinity War and, along with everyone else on the Internet, I have some thoughts about it. Sometimes when I’m writing about a book or a movie I try to avoid spoilers, but not this time. This time I’m going to just jump right in and spoil away, so if you have not seen this film, go do that, it is a very enjoyable night at the movies and you won’t regret it. It’s a complicated movie, so I’m just going to dive in with my thoughts.

As I said above, I think the movie was mostly successful as entertainment. The acting, for example, is uniformly great throughout the entire movie and throughout the entire cast. There is a lot of crazy stuff happening in this movie, and the actors spend all their time and all their energy selling it. No matter what logic-bending events are going on around the actors, they always provide a center that makes sense of it and allows us to enjoy the spectacle.

With those words of praise out of the way, let me almost straight away mention an aspect of the film that is a little problematic, to say the least. There is a trope called Black Dude Dies First, and it is one of the most enduring in popular culture. In this movie Heimdall is the first character to die on-screen, qualifying it for this trope. Later, Black Panther is one of the heroes lost in the snap, along with a bunch of other black characters such as Falcon. I wasn’t counting but I got the feeling that the numbers of heroes of color being killed seemed high. I started to feel uneasy, like something was going on, but I wasn’t counting and I couldn’t be sure how badly wrong this movie was getting things about race. Luckily, somebody was counting.

Josh H, on Medium, noticed the high number of black hero kills, too. Here is the culling data he put together: The following characters played by African Americans died in Infinity War: Heimdall (Played by Idris Elba), Gamora (Played by Zoe Saldana), Black Panther (Played by Chadwick Boseman), Falcon (Played by Anthony Mackie), and Nick Fury (Played by Samuel L. Jackson). Out of 16 characters visibly killed in Infinity War, 5 were played by African Americans and only ONE African American hero remains alive (War Machine). Perhaps more important, there are way fewer superheroes of color in the Marvel Universe compared with white superheroes to start with (so maybe erring on the side of preserving diversity might have made some sense here?). Also, it probably would have been a good idea to keep Black Panther alive after the culling. You literally just got MILLIONS of people of color on board and you pay them back by killing off Black Panther? Am I crazy here or is Thanos (and the MCI) replicating systemic societal bias? 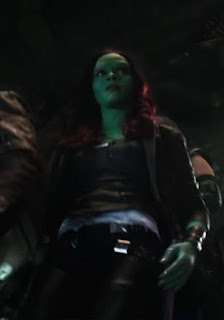 The thing that really stands out for me about this lapse in judgement, the thing that I found very distasteful, was Gamora’s fate. The fact that Gamora gets killed so easily was extremely hard for me to take. Gamora's death in the comic, according to IGN came during a battle between the Avengers and Thanos. Gamora was mortally wounded by Thanos, and that was why she had to be transferred into the Soul Gem. That fits for her warrior character, but in the movie she is just tossed from a cliff like garbage, with no fighting or even resistance involved. It was a note that didn’t ring true for me.

This is all a pretty big mark against Infinity War, and something that really took the shine off it for me, but on the plus side, the jokes are funny. It feels sometimes like they are shoehorned into the weirdest places, like the bizarre lightness of the meeting between the Guardians of the Galaxy and Thor after they rescue him from deep space. He has just seen half of his people wiped out, and he is cracking jokes with the Guardians almost immediately. It really feels tonally wrong, but those jokes are funny.


After praising one of the movies real strong points, its laugh-out loud humor, let’s stick the knife in again with something negative. The next big negative I saw was the plot. The plot seems to make sense as you are watching the movie, even though it is hard to get your head completely round all the interlocking parts. But it is after the movie, when you start thinking about it, that it dissolves into an unholy mess. I’m not the only one who noticed, either: Screenrant.com found 25 Things That Make No Sense About Avengers: Infinity War. You can follow the link to see the entire article, but just for starters:

Heimdall has sensory capabilities that allow him to see and hear anyone and anything that is in one of the Nine Realms but he doesn’t see Thanos’ ship coming towards them. Also, how does Thor know so much about Thanos? Thor tells the Guardians of the Galaxy that Thanos destroyed Xandar and took the Power Stone the week before. However, Thanos never mentioned anything about Xandar or how he got the Power Stone during his encounter with Thor. How does Nebula know that Thanos sacrificed Gamora? Nebula tells Quill that he came back from Vormir without her, which has to mean that he sacrificed Gamora for the Soul Stone.

Okay, so the plot doesn’t work, but the movie is still very enjoyable and that has a lot to do with the SFX. The special effects in the movie were great. A lot of Marvel movies have problems making heavy stuff like the Hulk and Thanos look slow-moving and heavy. This time they really got that right. There are lots of other beautiful moments, but one that springs to mind is where the massed ranks of Wakanda are running toward the enemy, and we see Captain America and Black Panther run out ahead of the mass. Nothing is said, but we see the power of these two supersoldiers. It’s a great moment of show, don’t tell.

Unfortunately for every good point, this movie has an equal measure of bad. It is a real mixed bag, an enjoyable one, but a mixed bag. The last thing I’ll mention is Thanos. I like Thanos, and think he has the makings of a truly great bad guy. I don’t think they got him right here, though. In the comics, Thanos - The Mad Titan - wants to destroy half of the universe as a romantic gesture for the love of his life, Lady Death. However, Lady Death was nowhere to be found in Infinity War. Instead, Thanos is motivated by overpopulation. That’s just dumb, stupid, and kind of racist. In practice, where you find concern over “population,” you very often find racism, xenophobia, or eugenics lurking in the wings. It’s almost always, ahem, particular populations that need reducing.

To be fair, Thanos said that the re-balancing of the universe should occur by random selection of people to be eliminated. However, if this selection was random, why did the original Avengers just happen to survive? At the end of the movie, we’re left with Captain America, Thor, Black Widow, Iron-Man, Hulk, War Machine, Rocket, and Nebula. Besides Nebula, Rocket, and War Machine, these are the original Avengers from the first movie. 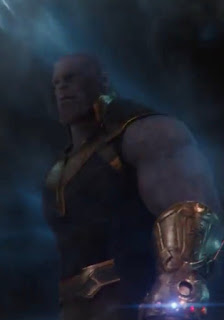 Thanos came across as more of a bulky ex-wrestler with a shaky understanding of population density. He fights the hulk, which should be a battle that is epic in scale, but lasts only a few seconds and breaks the Hulk both mentally and physically with just a few gentle slaps. It’s stupid. And then Captain America manages to go toe-to-toe with him.

Okay, I’m going to stop talking about the problems with the movie, which are many, and remind everyone that it is fun, a lot of fun. If there had been a couple fewer missteps, it would be an all time classic. As it stands, it is just a fun couple of hours at the movies.

Before we wrap up here, just a reminder that the best way to support this blog is to buy one of my books, so why not go over to Amazon, or Kobo and see if there is one that catches your fancy.
Labels: Marvel sci-fi movie