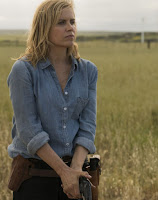 I have been a fan of The Walking Dead since the first season, and I also enjoy its spin off, Fear the Walking Dead. Neither show is perfect, but I love them anyway.


Madison Clark is the intelligent and domineering main protagonist of the series. She is a former guidance counselor, but I suspect she was a spy in a previous life based on some of the hand to hand combat feats she has displayed. Season four feels like a soft reboot, and we are not following this family any more.

Episode one of season four of Fear The Walking Dead doesn’t even feature Madison Clark at all. Instead it focuses on Morgan, who is a character crossing over from the main show, The Walking Dead, to the spin off, Fear the Walking Dead.


The opening sequence is an interesting psychological scene where Morgan is talking to people, or maybe is talking to himself, after meeting a cowboy who also fears he is talking to himself. It feels like it is about the madness of isolation in the empty world of the Zombie Apocalypse, and it is quite abstract. We really start to get a feeling for the fragile mental state of the survivors who are still left, months after the world fell to the virus. 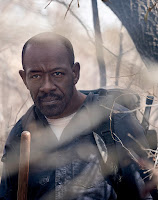 The photography is also beautiful, so lacking in saturation that it is almost black and white. Morgan and the cowboy he runs into are a strange combination, and Morgan’s feeling of distrust of the cowboy is visceral. The cowboy is lonely and needy, and wants Morgan to join him, and he reluctantly agrees, but it is no surprise when he thinks twice about accepting the man’s hospitality and moves on.

The cowboy follows him though, and a whole bunch of action starts happening, with a gang of thugs and groups of wandering zombies. It’s fun, but a lot less powerful than the earlier scenes. This action introduces a third character for what will become the main trio of this team. She is a journalist with a SWAT team vehicle. Introducing this character allows the show to do some interesting things as the journalist interviews Morgan and the cowboy, recording these interviews on video.

There follows another action scene that is just as ridiculous as the first one. It depends on the bad guys getting the drop on our trio, again, then again deciding not to kill them, giving them the chance to escape. The bad guys are then promptly eaten by zombies. It’s fun again, though it doesn’t make much sense. As long as you remember that these shows are based on a comic book, you can enjoy such shenanigans for the fun they are.

By the half way point of the episode, it is clear that this trio, Morgan, the gunslinger, and the journalist will become the team the show is based around. We, as the audience, might realize this but Morgan doesn’t. He leaves the trio the first chance he gets, preferring to walk on alone. Except now, with an injured leg, he finds it difficult to outpace the zombies.

Of course, his two friends follow him and save him. Then the trio is back together, and we again have a team you can base a show around. By this time I was thinking this was a hard reboot of the show, because none of the original characters had appeared but, right at the end of the episode, this turns out not to be true. At the end of the episode we get a very, very obvious trap. It’s not even a spoiler to say that a young woman in the road that our trio stops to help turns out to be the bait in an ambush.

The people springing the ambush, right at the end of the show turn out to be a handful of the characters from the previous series of Fear The Walking Dead, and the journalist asks them, “What’s your story?” It’s an effective setup for the series, and I wanted to keep watching to find out how these people end up as highwaymen.

Episode two starts to tell us their story. It starts with the word “Before” and the colors shift toward yellow, because this is taking place in the heat out West. We see that the original people from Fear the Walking Dead are living in relative security, including our first glimpse this series of mom, Madison Clark.

Madison has gathered a group in a compound and they are growing turnips, but weevils get to them, and the teenagers are bored in the compound, talking about staring at walls for entertainment. The compound looks strong from the outside, but there are weakness within.

Obviously, this relative safety and security can’t last. The only question is how this safe compound will be breached, forcing them to move on. The key to their downfall is a kid they have found named Charlie. She even tosses out a reference that I had to look up. She talks about Cross Road Blues and how the Robert Johnson mythology says he supposedly sold his soul to the Devil. She has done the same thing, we will soon see, and so this isn’t particularly subtle, but this is a zombie show. It is not about subtlety.

The people of the compound go out to look for this little girl’s family, and are fed little clues that a horde of thugs is around. It takes them a while to put two and two together, and in the mean time the first thing the group do is split up, like they’ve never seen a zombie movie before. They do this in a creepy town where there are neither survivors nor zombies. Madison promptly gets ambushed, leading into a really weird action scene where this new lady falls through the roof of an oil tank that is full of zombies. Ridiculously, they manage to fight their way out of the dark, enclosed space, full of zombies without a scratch.

Back at the compound, one of the show’s most annoying characters, a teen called Nick, is having issues. He is so traumatized that he can’t leave the compound. He tries, but crashes his car and has to be rescued. It doesn’t lead to the fall of the compound, though. It is just him being his usual annoying self.

Then, at last, a rag-tag convoy of RVs and trucks appears, full of thugs with guns. Madison goes out to talk to them and the head bad guy reveals that Charlie was his spy, and he predicts weevils will get all their crops. He says he and his men are just going to sit and wait for their compound to fail. And they do just that. They sit on collapsible garden chairs and drink bear, enjoying watching the compound struggle in a kind of psychological siege.

Then we see the word “Now” and the colors go back to black and white, so we are Back East. We find out what the bad guys are called, the Vultures. Episode two ends and we have all the elements needed to tell a compelling story - and I for one am along for the ride. I prefer stories where the zombies are the main problem, rather than groups of crazies like The Vultures, but it has long been established that in the world of The Walking Dead other people are the real enemy, not the zombies, and so we take what we can get.

Before we wrap up here, just a reminder that the best way to support this blog is to buy one of my books, so why not go over to Amazon, or Kobo and see if there is one that catches your fancy.
Labels: Horror post-apocalyptic horror