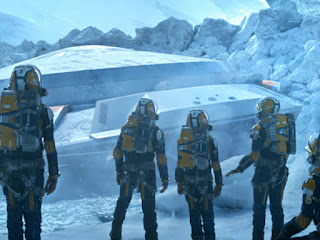 I would recommend jumping in at episode two with Lost in Space. It’s a great series but the slow and clunky pilot doesn’t do it any favors. Episode two, on the other hand, throws right into the middle of the action. It starts with a great scene, featuring a space explorer called Don West and his chicken in mortal peril.

The pilot episode was almost all setup, the sort of thing a viewer with even half a brain just does not need. There were even terrible flashbacks to family life on Earth that served little narrative purpose. Watching the pilot was like when you realize that you will be spending the first forty minutes of a superhero movie on being shown the hero’s origin story, yet again. Explaining everything just slows the story down and the pilot of this show is a bad example.

Luckily episode two is much better. It doesn’t bother with any setup, and starts with a literal cliffhanger. We are aboard a lander with Don, his chicken, and we also see Doctor Smith is in the copilot seat. The crashed lander is breaking apart, right at the edge of a precipice. It’s great stuff. I was very much in two minds about the show after episode one, but episode two rekindled my interest. 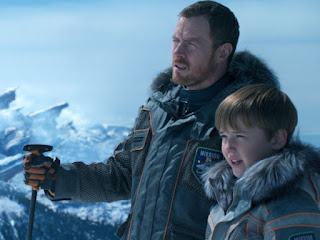 There are some great, atmospheric settings. The Robinson’s lander, for example, is encased in ice, so most of the family are outside surrounded by mountain peaks and arctic snow. They hear groaning in the distance and the mom says:

Let’s agree, that was just the wind, right?

Meanwhile, dad is down in the spaceship, bathed in red emergency lighting. They are just meters apart, but worlds away from each other. It is a really nice setup, but they don’t milk it. The story keeps on moving at a nice pace.


Some miles away, Doctor Smith, and Don have escaped their doomed Jupiter lander, and are catching their breath on a mound of scree the size on a mountain. This scree is as sharp as diamonds. Dan says it might even be diamonds. As we will find out later in the same show, this is just part of a planetary environment that the writers have really put some thought into. Also, from the vantage point of Don and Doctor Smith, we see a green valley and beyond it the snowy mountains the Robinsons are trapped in. It is just a fleeting shot, but it establishes a lot. 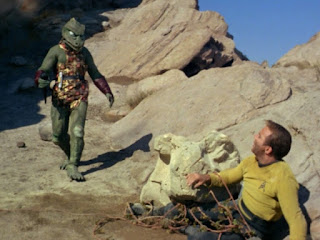 The vistas of an alien world that this how offers up are all gorgeously rendered. There are even rock arches, like in the background of Spaceman Spiff strips drawn by the mighty Bill Watterson. Nothing says alien world like a desert rock formation – and I blame Star Trek for this.

Later in the second episode mom and dad enter an alien spaceship, which has crashed just like their Jupiter, and it is yet another atmospheric, and very different environment. It is dark and organic, like the carapace of a stag beetle. The controls are like the antlers of the same creature, bent into a ring, and things get interesting when mom and dad activate them. 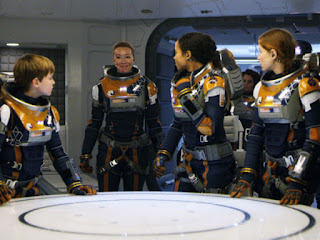 The Robinsons are an annoying, high-achieving, middle-class family. They are very believable as a family that is subjected by the parents to almost military discipline. I wouldn’t want to be one of the them but they are fun to watch. You imagine they can deal with just about anything. There is tension though, as the parents give the kids contradictory orders about what system to fix on their crashed lander. Mom wants to solve this by putting herself in control, as a matriarch, and though dad doesn’t say anything, you can see he isn’t happy about it. The acting is subdued in the show, with nobody’s voice ever rising to a shout. But that is somehow believable, in the face of an oppressive new planet. It also fits with the prickly dynamics among the family. The acting also improves enormously as the show goes on.

The production values, once dad gets the lights working on the lander, are amazing. For me, as a kid raised on the flimsy sets and slapdash costumes of Dr Who and Blake’s 7, back in the 70s, the look of this show is amazing. There is also a lot of location work, with a real atmosphere created, as the survivors find other crashed and ejected crew scattered around the surface of the planet near them. I really go the shivers as they found the flaming wreckage of Jupiter 17, one of the landers that did not survive planetfall. I really got the feeling of the characters being on an uninhabited and inhospitable planet, trillions of miles from Earth. 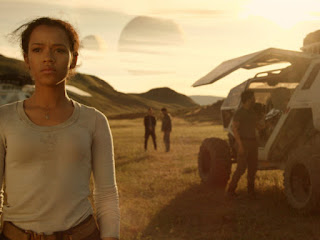 We even get a vehicle, which must have cost the production a lot, and I approve of the expenditure because I am a big fan of sci-fi vehicles. I even did a top ten of sci-fi vehicles in an earlier post on this very blog. It’s called the chariot, and it is a moon rover with an enclosed cab. When they first pull the dust cover off it, there are no wheels on it. There is just a sticker on the window saying some assembly required, which was a nice touch of cheesy humor, perfect for a show like Lost in Space. The chariot is a subcompact of a moon rover, it’s small, but I like it a lot. I like the shots of it speeding across alien tundra, especially with an insectile, alien robot hanging onto the back.

So, all in all, I have completely come around with Lost in Space. I was put off by the pilot, but the next episodes have started to click. We find out that the survivors of the destruction of the colony ship, The Resolute, are spread across the surface of the planet, and we hop around from one group to another. We follow people as the come together, and as they go off on their own. It’s a great device, allowing us to explore this unknown planet with them. I think, with the improved acting and pace, and with the uniformly high production values, we have the makings of an excellent, long-running show here.

I must admit, it took a few weeks, even for a sci-fi nut like me, to go to episode two after the disappointing pilot, but after episode two I watched episode three immediately, and I could feel a binge taking hold of me. I actually found myself grinning in pleasure at the start of episode three. The first scene is a flashback to conversation, back on Earth, between Dr Smith and her sister, played by... wait for it... Selam Blair! It’s melodramatic, bonkers, and cheesy, but yikes I loved it. It looks like I’m on board with Lost in Space for the long haul. Let’s hope they never escape that far-off planet.

Before we wrap up here, just a reminder that the best way to support this blog is to buy one of my books, so why not go over to Amazon, or Kobo and see if there is one that catches your fancy.
Labels: sci-fi TV