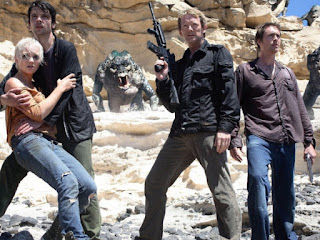 Time travel is a very particular little sub-genre within the sci-fi and fantasy fold, but it holds some real treasures. Time travel TV will often focus on the consequences of traveling into the past or the future and the shows often involve changing history, either intentionally or by accident. We see people travel in machines, in anomalies, within their own mind, seeing visions of the future, or being physically or mentally transported there. For some shows, time travel is a lot more complicated than that. The future and the past is constantly changing, but one thing that remains the same is how brave and interesting the characters who decide to journey through time are. Let’s hitch a ride with them as we count down through my top ten of time travel shows. Starting with number ten... 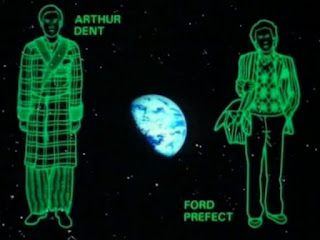 10 - The Hitchhiker's Guide to the Galaxy

The Hitchhiker's Guide to the Galaxy is about Arthur Dent and his friend Ford Prefect escape the destruction of Earth only to face incredible trials, tribulations and adventures in space and time. It is a classic, with a hint of both Doctor Who and Monty Python. It also takes time travel to the extremes, with an exploding computer sending Arthur and Ford to Milliways, the Restaurant at the end of the Universe. Here people can enjoy a good meal while watching the end of all things. They soon discover that their robot, Marvin has been waiting for them for 5,376,000,000,000 years. 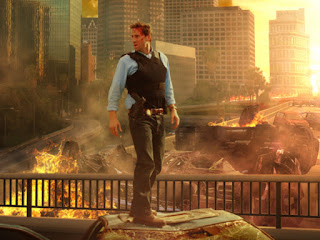 FlashForward was an intriguing show that started to look doomed before the first season was out. It was intended as a replacement for lost, a high-concept, sci-fi series designed to elicit the loyalty Lost had been shown. Time travel was at the heart of this show, with the entire world taking a mental leap into the future. Everyone saw the blackout, the date to dread, the consequences to avoid. Unfortunately, when the show came back for the second half of the season, the writers seemed to be trying to rejig the entire concept and start again when they came back didn't help either. 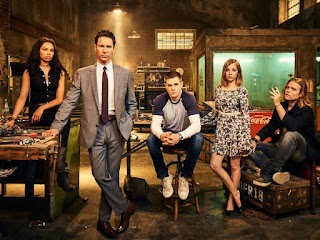 Travelers is about thousands of special operatives tasked with preventing the collapse of future society. These operatives have their consciousnesses sent back in time and transferred into the body of present-day individuals who would otherwise be moments from death, to minimize unexpected impact on the timeline. Each traveler must maintain the host's pre-existing life as cover while carrying out missions in teams of five. Their missions are dictated by an artificial intelligence in the future. The show focuses on one team of five travelers, starting from their transfers of consciousness. The time-bending drama has ratings that are growing by the day. It stars Will of Will & Grace, Eric McCormack, who plays Grant MacLaren.

The first episode is a great evocation of how lost a group of time travelers can feel in our strange, current reality. It is like a mystic, unsettling psychological horror. Nothing is explained, and it is a wild and unsettling ride. 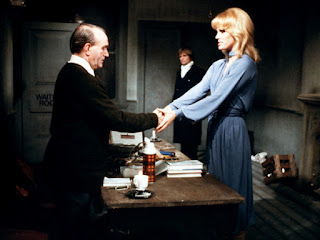 Sapphire & Steel. In the late 1970s, a British TV show talked about the dangers of messing around with time. Sapphire and Steel are two agents, called operators - played by Joanna Lumley and David McCallum - are sent to correct incursions of the mysterious and malevolent forces of time into our world. They are formed from the fabric of the universe itself and both characters are telepathic. Steel has inhuman strength, telekinesis and the ability to drain thermal energy, Sapphire can rewind time, divine the history of objects and possesses some control over human minds.

The broadcaster was impressed by the strength of the writing and potential low cost of the show. The shows were a mix of ghost story, confined locations, science fiction, abstract horror, and mysticism. The shows were slow in places, but excitingly conceptual. So little is made explicit in the show that there is feeling of the power of abstract, incomprehensible forces. This feeling was nicely summed up by the words that introduced every episode.

All irregularities will be handled by the forces controlling each dimension. Transuranic, heavy elements may not be used where there is life. Medium atomic weights are available: Gold, Lead, Copper, Jet, Diamond, Radium, Sapphire, Silver and Steel... Sapphire and Steel have been assigned. 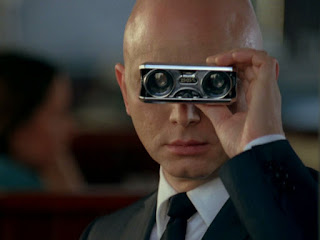 Fringe is about Dr. Walter Bishop, a mad scientist freshly released from an insane asylum by FBI agent Olivia Dunham to help her solve a rash of deaths/attacks involving weird-science, called The Pattern. They're helped by Walter's son, Peter, who it turns out was kidnapped by Walter from an alternate universe when his real son died of a mysterious disease. A constant recurring element in their adventures is The Observers.

At first sight, The Observers are bald and lacking eyebrows. They very rarely get involved in the events they observe. They perceive time simultaneously, rather than moment by moment. They are a team of scientists from a very far away future, akin to hyper-evolved humans. There were other elements of time travel in Fringe, most famously in the episode White Tulip, but I found the Observers to be the most compelling imagining of what time travelers from the future might be like if they came to visit us. 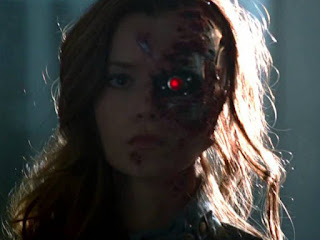 Terminator: The Sarah Connor Chronicles was axed before its time because of poor ratings. It was a classic but it didn’t try to make friends, instead presenting a meditative, complex television show. It told a complex story with no concessions made to ease in newbies who joined the show late. Cameron was a wonderful character, forever at odds with her own nature. She often observed that future John would not have done what present John just did. It was a show where we didn’t get to see time travel very much, but where the future cast a long shadow over the present. Interestingly, Terminator: The Sarah Connor Chronicles has kept a pretty consistent view of time travel. In this show, every time you travel back, you create a new timeline. So the future that Kyle Reese came back from in the original movie is long gone, and even the future that his brother Derek Reese came from is also now inaccessible to us. 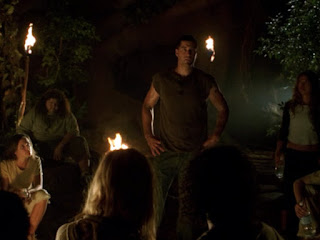 Lost was event television, and it contained a lot of elements. One of the most interesting and successful was the way it dealt with time travel. Time travel on Lost included Desmond's mind-trips, the island itself phasing through time, and people jumping around the island's past. The show stated definitively that a time-traveler can't change their own past. In other words, when you travel through time, you don't create a new timeline, you just visit other points on the same, immutable timeline, although these rules didn’t apply to Desmond.

Desmond memorably came unstuck from his own timeline in one episode, skipping between his past and his present, though his body didn’t go anywhere, the time travel was strictly neurological. In another episode Alpert gives Locke his compass, so Locke can give it back to him in 1954. Potentially this means that the compass is stuck in a time loop.

Lost was never paying much attention to time travel, and it didn’t end up being central to the Island’s mysteries, but the time travel episodes were fun while they happened. 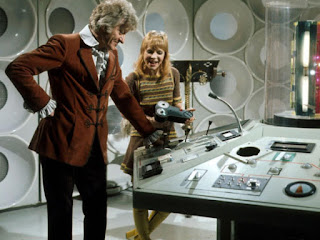 Doctor Who is a British science-fiction television show. The adventures in time and space of an alien adventurer. Creating sci-fi and fantasy TV can get expensive, with an episode of Game of Thrones costing a whopping $6 million. Back in the '60's, '70's, and '80's, the BBC did not have that sort of budget, not even close. Doctor Who began with a budget of £2000 per episode (around $50,000 in today’s money). The show's most iconic villains, the Daleks, used egg boxes and even a toilet plunger in their design. But the show also had a charm that is impossible to buy, and ideas that are fascinating.

The Doctor is a terribly irresponsible person, and never has much of a plan. He randomly shows up, wanders into trouble, fixes it and saves the day, and then leave before the cleanup begins. In an episode called The Face of Evil, we find out that some time in the distant past on an unnamed jungle planet, the Doctor met a starship full of planetary colonists, and helped them with a well-intentioned repair job on their superintelligent computer. He patched it using his own personality.

The computer then became a god to the colonists that were its charges. The computer divided them into two tribes and pitted them against each other and carved the Doctor’s face into a cliffside, hundreds of feet high. The Doctor was always unreliable, and during the Fifth and Sixth Doctor eras, it was common to see him fail. But up to this point in the series, the idea that the Doctor could screw something up on such a massive scale as this was new and shocking. It shows the terrible effects time travelers can have, and how much trouble they can cause.

Primeval is a show where strange anomalies start to appear all over England. Professor Cutter and his team must track down and capture all sorts of dangerous prehistoric creatures from Earth's distant past and near future. These mostly consist of extinct, usually prehistoric, beasts coming through magnetic time portals known as anomalies. In season one we see dodos, a pterosaur, a sea reptile, and a predatory creature from the future. It was great, initially, but went downhill after season one. If they could have captured that magic of season one and held onto it, it could have something amazing, instead of getting axed pretty quickly. 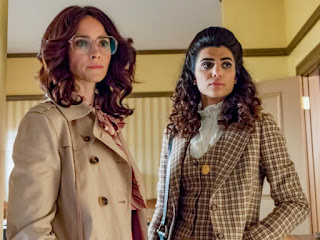 Timeless follows the adventures of an unusual trio—, a history professor (Abigail Spencer), a scientist (Malcolm Barrett), and a soldier (Matt Lanter) as they attempt to stop an evil cult from destroying history. It is a lot of fun, and very woke. It is as much about the evolution of its characters as it is about saving history from Rittenhouse’s grand conspiracy.

The show asks what you would do if you could turn back time? Will it go your way? The team think they can control the timeline, but it changes unpredictably. In a recent episode of Timeless, the group traveled to visit blues legend Robert Johnson, one of many examples where the unsung heroes of black history have been highlighted on the show. We see brilliant, vibrant black culture. When Timeless gets it right, it is extremely good at shining a light on episodes of history we had no idea about, and characters who played significant but unsung roles.

Before we wrap up here, just a reminder that the best way to support this blog is to buy one of my books, so why not go over to Amazon, or Kobo and see if there is one that catches your fancy.
Labels: Top 10