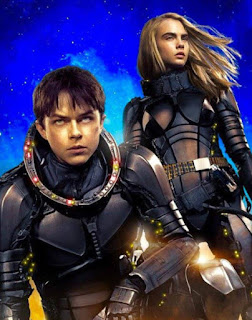 I watched Valerian the movie a while back, and I did not like it much. There were some nice scenes, but it was mostly an exposition-heavy mess. And I wasn’t the only one to think so. It received mixed reviews from critics, who praised its visuals while criticizing the plot and some of the casting. David Ehrlich of IndieWire said "the vividness of this place only underscores the lifelessness of the people leading us through it." While, National Public Radio film critic, Mark Jenkins, wrote that the film's "perspective often seems more 19th- than 26th-century, and the blobby computer-generated creatures resemble natives from the most racist of Tarzan movies."

People said at the time that the comic book was much better, and that got me thinking about whether that could possible be true. Could a European comic book, with all the casual sexism and crazy plotting that implies, be any better than the movie. I doubted it, but I had to know for sure. 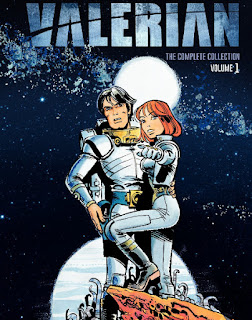 The cover of the collection I got my hands on does not bode well. We see a square-jawed hero being squeezed by his female companion the way a koala squeezes a eucalyptus tree. This is [known in the land of tropes as a leg cling](http://tvtropes.org/pmwiki/pmwiki.php/Main/LegCling). The classic form of this trope depicts a muscle-bound man in a dominant pose, with an attractive woman literally clinging to one of his legs. 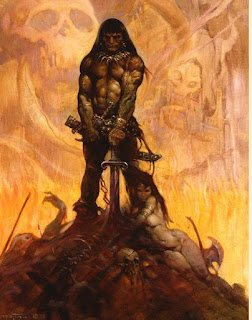 The leg cling is a pose popularized by the fantasy paintings of artists such as Frank Frazetta. The man is usually handsome and manly with a cocky expression on his face. Meanwhile, the woman is almost always half-naked in a sexualized manner, with a helpless expression and posture that reinforce her submissiveness. The contrast between the male and female characters alludes to the notion that men are defined by their actions and women by their passiveness.

We are, however, told to never judge a book by its cover, so I will have to read a little of the comic book before dismissing it as sexist nonsense. 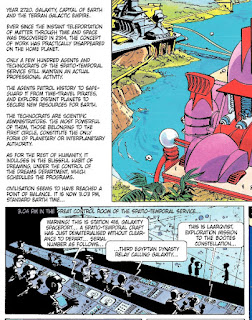 The first story is called Bad Dreams and it starts, like the movie, with a lot of tell, don’t show, where we are introduced to this future world via a honking great info dump. I can forgive this in a comic book, though, as big text boxes are part of the medium. As soon as this introduction is out of the way, the comic takes an interesting turn. 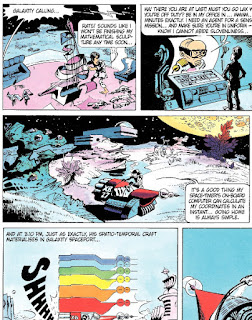 When we meet Valerian, unlike in the movie where he spends his free time on the beach or bed hopping, this Valerian is building a mathematical sculpture. The illustrations are a lot more cartoonish than the cover led me to believe, too. The cover looks like cowboy art from Blueberry, while the interior art, at least the early stories, looks more like Lucky Luke.

The story is much more interesting than I was expecting, too. The first story in the collection is about how the people of Earth now spend all their time dreaming. Dream in the future though are provided as entertainment, and the machine used has been sabotaged. It is a very interesting notion. Despite my initial reluctance I found myself warming to the comic book after just a few pages.

Unfortunately, Valerian is soon within the dreams, chasing down a bad guy called the Xombul, and so the strip turns into a bunch of medieval stuff that is more like Asterix than science fiction, so my interest in it waned. I found myself flipping forward to find the next story. 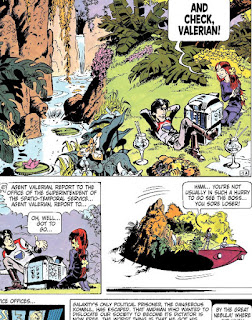 The next story is The City of Shifting Waters, and again it starts with a health dose of text. There is a great sight gag wher we assume Valerian and Laureline are relaxing in a park or garden, but then they head to headquarters, and it turns out the garden is the interior of their flying boat. This story again soon leaves the far future behind, and turns into a chase through alternate histories. For a sci-fi book it hasn’t yet had many spaceships or robots in it. 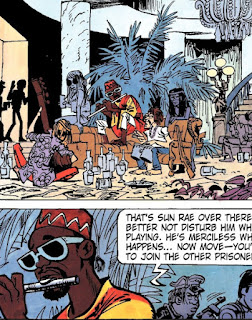 It is certainly an interesting reading experience, even if it isn’t the sort of pulp sci-fi I was expecting. One thing I was very worried about was whether the book would feature appalling racial drawings, such as seen in Tin-Tin and Asterix, but here Valerian pleasantly surprised me. It is not perfect, with Asian characters colored bright yellow, for example, and the main black character in the story is a gangster, but the drawings of people other than white are quite understated and accurate. There are none of the thick lips and squinting eyes I was dreading. 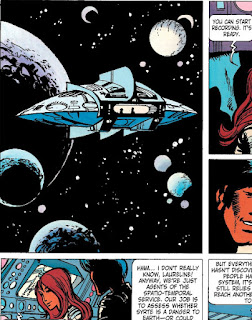 The next story in the book is The Empire of a Thousand Planets and I’m hoping this one will be closer to the space opera of he movie. The book has been fun up to now, with its time-travel shenanigans, but I’m more interested in space opera. It is nicely drawn, like a mix of Spaceman Spiff and a sci-fi Marvel title with giant machines by Kirby.

I is a similar setup to the movie, but where the movie inexplicably condensed everything until it happened aboard a single space station, in the comic book the empire is really spread across thousands of planets, and Vaelerian and Laureline end up on just one of them. It makes more sense, and is a more satisfying story. 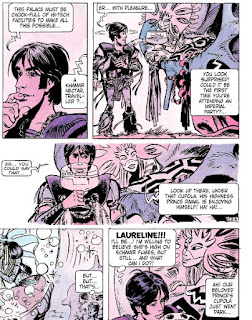 Apparently the Movie is mostly based on a later period of the comic than the one presented here, but even so, lots of images from this story were transferred to the screen, such as Laureline’s makeover as an alien princess. Unfortunately the movie made the images part of a confused story, and that robbed them of the impact they should have had. The visuals were a real strong point of the movie, but nobody noticed because the story was so bad. In the comic book, events flow more naturally and we still get the beautiful visuals of the movie.

It turns out the cover of this collection is not representative of what is inside, at all. The comic book is a lot of fun, and it really is better than the movie. The movie is very flawed, but worth a watch, while the comic book is a fascinating glimpse into the best work being produced in Europe at the time.

Before we wrap up here, just a reminder that the best way to support this blog is to buy one of my books, so why not go over to Amazon, or Kobo and see if there is one that catches your fancy.
Labels: Comic Books