Ant Man and the Wasp - Review 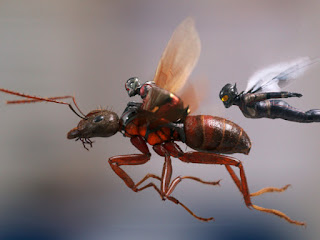 I just got back from the movies, where I watched [Ant-Man and the Wasp](), which I enjoyed immensely. In March 1979, I read one of my first superhero comic books. It was produced by Marvel UK, who packaged together a bunch of stories into one comic book. The main story in this comic book was The Hulk, riding a wave of popularity on the back of thee smash-hit TV show of the same name, but there were other stories inside the comic book, too. 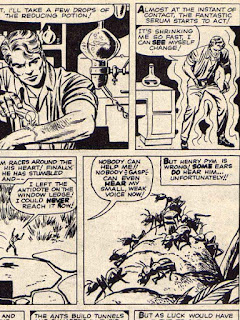 One of those stories was Ant-Man. This wasn’t just any Ant-Man story either, it was The Man in the Ant Hill!, written by Stan Lee and penciled by Jack Kirby. In the story, Henry Pym successfully uses his reducing serum to shrink a chair to doll size and an enlarging serum to return it to normal size. Placing a few drops of reducing serum on his arm, Henry Pym quickly shrinks to ant-sized, but realizes that he left the enlarging serum on the window sill, then runs into an ant hill.

One of the great things about Marvel superhero movies is that they often have a very different vibe to each other. Black Panther is a very serious and weighty movie, while Doctor Strange is a more straightforward adventure movie. Ant-Man and The Wasp, on the other hand is a more entertaining B movie kind of a film.

They don’t take themselves at all seriously, and there is a scene with footage of a black and white giant ant movie from the fifties that shows us they are putting together entertainment that is very much tongue in cheek. Screenrant identifies the film as the 1954 movie titled THEM! There is wisecracking in pretty much all of the Marvel superhero movies, it’s part of the formula, but this movie goes far beyond that in the service of entertainment. There are big set pieces in the service of getting laughs, and I have no problem with that.

This movie is like Fantastic Voyage, and like Honey, I Shrunk the Kids, and throws in a bunch of small stuff getting big, and a bunch of big stuff getting small. The special effects in the movie do a lot of the heavy lifting, and they are great. The car chases especially, where cars are shrunk and grown are a lot of fun.

In Ant-Man and the Wasp, the main thrust of the plot is based around getting Janet van Dyne back from the quantum realm, and this is where it gets like Fantastic Voyage. I would have liked to see more of the quantum realm, but this interesting environment was only hinted at. That’s just a small quibble, though because this was a great movie. I particularly liked how Wasp kicked ass.

Ant-Man director Reed was excited to introduce Hope van Dyne as the Wasp in this film, insisting that she and Lang be equals. The Mary Sue has a cool quote from the director about this: 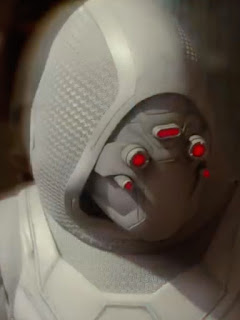 I felt a great responsibility and a tremendous amount of excitement to be the person who was able to bring Wasp to the screen. In terms of the legacy of that character and Janet Van Dyne, there are a lot of people who know the MC
U movies but don’t know the comics so well. Some people get shocked when you remind them that on the cover of Avengers #1, Ant-Man and Wasp — Hank Pym and Janet Van Dyne — are there. And Janet was the one who named the Avengers. She’s part of the Mount Rushmore of Marvel Comics characters. So when it came time to do our movie’s versions of those characters, yeah, I took it really seriously.

It’s not just The Wasp wither, Hannah John-Kamen plays Ghost, a woman who can phase through objects, and who is the villain of the movie. The character is traditionally portrayed as male in the comics, but the creative team felt casting a woman would be more interesting, and they hit paydirt with John-Kamen. She is an intense and compelling presence, and sells her characters motivations completely.

So go see it at the movies, because all the special effects reward being seen huge, as you munch a mouth full of popcorn.
Labels: Marvel Movies review