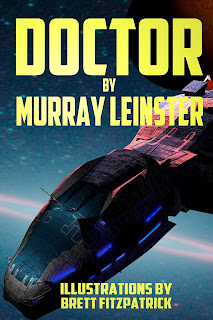 In order to bring visitors to SpiralcatBooks.com, my sci-fi ebook website, I am using an age-old promotional idea that will probably never go out of fashion, free books. Everyone likes free books, and so SpiralcatBooks.com now includes a section where people can download free sci-fi, and other classic genre books. All of these books are already available from Gutenberg for free, of course, so why would somebody come to my site to download them instead? Don’t worry, I have also had an idea for how to add value to the books, and differentiate what people get from what is available at Gutenberg.

The list of books on my site will not be the usual pile of public domain books, because a lot of what is in the public domain is absolutely reprehensible. A lot of it, an absolutely surprising amount, contains views and scenes, presented by the author as unremarkable, that most of society today has, thankfully, moved on from. The idea, therefore, behind the list of SpiralcatBooks.com Classics is that it will be a curated list that tries to avoid books that contain the worst of the racist, sexist, and homophobic themes and attitudes that were so common in books of the past, and are still all too prevalent in books being published today.

It is difficult to draw the line, especially when it comes to diversity. Almost all of the sci-fi published in the past, for example, features casts of characters that are predominantly white and cisgender male. I have decided that there is not much to do about this, but what I can do is disregard books from this list that contain, for example, overt racism.

The SpiralcatBooks.com Classics series will, therefore, be a curated list of sci-fi that passes two tests. They must be entertaining to me, and they should not repulse me with overt instances of racism, sexism, homophobia, or any other hate speech. I’m also going to make snazzy covers for the books, and maybe a couple of illustrations. And all fro free, just to drive traffic to the new site.

Doctor is a swift read that is about a spaceship endangered by an alien virus outbreak, and the driven and ruthless doctor who will do whatever it takes to defeat the disease, or make sure it never spreads to the rest of human space. Doctor combines The AndromedaStrain with more traditional sci-fi to create something with a unique feeling to it. There is real tension, as the doctor leaves the reader in no doubt that he will stop at nothing.

Murray Leinster (June 16, 1896 – June 8, 1975) was the nom de plume of William Fitzgerald Jenkins. Leinster began his career as a freelance writer before World War I, writing jungle stories, westerns, detective stories, and even romance. Leinster’s first science fiction story, “The Runaway Skyscraper”, appeared in the February 22, 1919. In the 1930s, he published several science fiction stories and serials, and continued to appear frequently in other genre pulps.

Murray Leinster’s 1946 short story “A Logic Named Joe” contains one of the first descriptions of a computer (called a “logic”) in fiction. In the story, Leinster was decades ahead of his time in imagining the Internet. He envisioned logics in every home, linked through a distributed system of servers (called “tanks”), to provide communications, entertainment, data access, and commerce; one character says that “logics are civilization.”

He won a Hugo Award for his 1956 story “Exploration Team”. Leinster was also an inventor under his real name of William F. Jenkins, best known for the front projection process used in special effects.

This version of Doctor has cover design and illustrations by Brett Fitzpatrick, who is the author of a sci-fi series of books called the Dark Galaxy series. Book one of this series is Galaxy Dog.