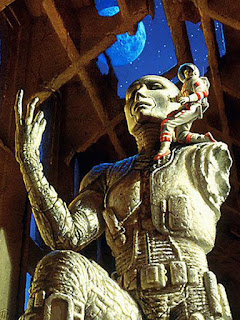 I am a big fan of sci-fi, a fact anyone reading this blog will be left in no doubt about, but I also like economics. I had not really seen these two interests as being particularly closely related - until today, that is.

What happened was that I was browsing io9, something I do pretty much every day, and my attention was caught by a news article reporting that:

One of the most formative works in science fiction history is finally being brought to the screen. After years of false starts, both at the movies and on TV, Isaac Asimov’s Foundation just got a 10-episode, direct-to-series order from Apple.

I read the article, and then continued on reading the comments, because on io9 it is usually safe enough to do so. Some trolls get through, but most are weeded out. In the comments, a concept came up that I was not familiar with - having never read the Foundation books – a concept called called Psychohistory. I assumed it was like history in 1984, a heavily edited version of the past that can change at any moment, but I was intrigued enough to look it up on Wikipedia and it is nothing of the kind. It is defined by Wikipedia as:

a fictional science which combines history, sociology, and mathematical statistics to make general predictions about the future behavior of very large groups of people, such as the Galactic Empire.

Later in the Wikipedia article on psychohistory there is this fascinating tidbit:

At the 67th science-fiction world convention in Montreal, Paul Krugman, the Nobel laureate in Economics, mentioned Hari Seldon, a central character in Foundation who was a psychohistorian, as his inspiration to study Economics since it is the closest thing to Psychohistory, according to P. Krugman.

I smiled with pleasure at reading this because Krugman is the kind of lefty economist I like to read. I used to have his blog posts emailed to my inbox for a long time, until The New York Times pulled them behind a paywall. And he’s right about how close to sci-fi economics is... when you think about it. Economics is a powerful force, and it can be used for evil. You see this only too clearly when you are on the receiving end of this treatment.

It just so happens that in the 1980s I was on the receiving end. Thatcherism, which is just warmed over Reaganomics, was all the rage back then and Thatcher was in the middle of reshaping the UK. Her gut feeling was that the UK would have to be transformed into a knowledge economy and survive by providing services to goods producers in the third world. In her mind, factories were for brown people overseas, while people in the UK should work in offices and banks. And so, in service of this idea, huge numbers of factories and heavy engineering in the UK was shut down.

I was spat out of education at about this time into a former mining and heavy industrial area that had been transformed into a sea of unemployment. I remember that a McDonald’s opened in a city in the region and it made the news. Thousands of people applied for the four or five shitty "management training" positions on offer, including me.

My education had told me that interviewing for a management position required the applicant to wear a suit and research the company. I dutifully went to the shops and picked out a suit, which my mom bought for me, and watched a documentary on franchising that the BBC was showing. It included an interesting section about a cubicle with no furniture where McDonald’s employees lay down to dream up new products. I remember the presenter pointing at one of these cubicles and saying something along the lines of:

Perhaps this very cubicle is where the Chicken McNugget was dreamed up.

I thought bringing this up would be an entertaining way to show the guy doing the interview that I had done my research on the multinational that I wanted to be a part of.

He was not impressed. He just gave me a voucher and told me to get a free milkshake on my way out. I vividly remember how many other people were in line for their interview. McDonald’s gave out a lot of free milkshakes that day. I was trying to get a job in an area where that had been made almost impossible by economics.

Thatcher’s ideas, admittedly extremely wrongheaded, unscientific, and ideological as they were, had a formative effect on me. That was my first interview, and I have not forgotten it. A sprinkling of other dispiriting interviews followed but the British economy in general and my local area's economy in particular was so royally borked.

This wouldn't have been so bad, of course, if there was some investment put into the area, but Thatcher decided tax money should not be spent rehabilitating areas made waste by her ideas. Instead it was given to Yuppies to spend on Bolivian marching powder and Dynasty Building. It doesn’t take a genius economist, or the sci-fi discipline of psychohistory, to see she was creating a country that would become a grim place to live in.

In fact, rather than predicting history, economic ideas actually create it. That makes economics an even more frightening force than psychohistory, and very definitely earns it a place in the sci-fi rogues gallery, alongside AI, environmental collapse, virus outbreaks, and all the rest.
Labels: self-publishing Worldbuilding