Doctor Who - Arachnids in the UK 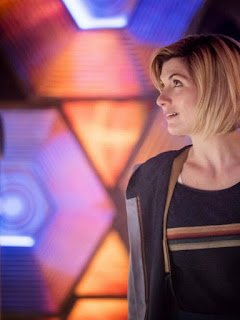 The credits just rolled on the latest episode of Doctor Who, so I have immediately hopped onto the computer to get a blog post up about it as soon as possible. The episode is called Arachnids in the UK,which is episode four of serieseleven, and again it is a very fine and entertaining piece of television. I'm so impressed that, at almost the half-way point now, this series of Doctor Who has yet to really put a foot wrong. I enjoyed it enormously, and I want to talk about it, so be warned...


There aren't really any plot twists in this one, but even so, it is probably best to avoid reading this review until you have seen the episode – spoilers and all that, you know.

Okay, with that out of the way, let me say that the thing I really noticed this week is the way the series is working hard to connect itself with the traditions of Doctor Who. This particular episode, for example, has numerous strands of Whovian DNA running through it, connecting it to the very earliest days of the show. For one, Doctor Who has long had a reputation in the UK of kids having to watch it from behind thesofa. Of course this reputation comes from the 1970s, when kids were a lot less sophisticated. Children today have all watched super-scary movieslike IT and can handle a lot more in the way of scares than we could, all those decades ago. Even so, this episode has some very effective creepy moments, and I was certainly scared, at least now and again.

As well as being an attempt at a proper scary slice of Doctor Who, this episode is also in the long tradition of giant creatures menacing drizzly English locations. The Doctor has been menaced in the past by dinosaurs, which are by definition giant, huge robots, the Loch Ness Monster, giant maggots, enormously overgrown plant creatures, and probably many, many more. Seeing the Doctor run from overgrown beasts is as Doctor Who as the sonic screwdriver, and very welcome.

The giant animals in question are spiders, which also have a history with Doctor Who. The Doctor fought invadingspiders back in 1974, in a story called Planet of the Spiders. In a nice echo of the past, these previous spiders also appeared in series eleven, but of the original run of the show. It was an important story, featuring both Jon Pertwee and Tom Baker as the Doctor. It also saw the introduction of the term "regeneration", making it a very enjoyable call-back indeed.

Then there was a little bit of lefty politics this week, which is also nothing new for Who. Doctor Who often pits ordinary folks, servant robots, servitor species, and the like against the caricatures of various out-of-touch, callous, overlords. This episode casts ChrisNoth in the role of would-be dictator, and he does a great job of being an engaging and charismatic monster. I could imagine him slotting in very nicely into the upper echelons of the GOP, with the attitudes he spouts and his general lack of morals or character. Nice stuff, and a great nod to Doctor Who tradition.

Thankfully, Arachnids in the UK does not follow classic Doctor Who too closely, because there are some distasteful things lurking in the past of Who. For example, Planet of the Spiders features a white Australian named Kevin Lindsay in yellow face playing a character named Cho-Je. It's some pretty nasty stuff, done with yellow makeup and some gurning. The new show, with its inclusive cast, is a breath of fresh air in comparison with such nasty moments of past Who. In fact, I recently tried to rewatch Planet of the Spiders, but this yellow-face character, along with some brutish patronizing of the sublime companion Sarah JaneSmith by the useless lummox, Mike Yates, made me switch it off. Watching the new series, with a female incarnation of the Doctor, means not being slapped in the face with nasty stuff like this, obviously a huge change for the better.

Another sign of the show’s diversity is the music that Ryan uses to attract spiders late in the episode. The song is Know Me From, a grime track by Stormzy, released in March 2015. But, then again, though this moment seems supremely modern, it too is a callback to Who history. Music has always been part of this show, and specifically stuff of the moment, such as Stormzy. In the very earliest days, a clip of The Beatles performing Ticket to Ride was used in the very first series of Doctor Who. Vicki, who is from the 25th century, regards the song as classical music.

Whittaker's version of the Doctor is going from strength to strength, and it is fun to watch her friendly attempts to take charge of situations and help the people around her. She too is one of the show's links to its own past, maybe one of the best and most important of them. For a Tom Baker fan, like me, she feels like the Doctor I know and love, but new and regenerated. From the trailer for next week's shenanigans, it looks like we might be getting a space station in peril episode,like The Ark inSpace, and I am all in for something like that.
Labels: Doctor Who TV