A new cover for one of my latest books 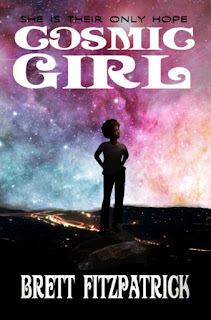 I quite recently wrote a book called Cosmic Girl, and I was looking at it the other day when I realized the cover was a little dark, and didn’t really speak about what was inside. On the spur of the moment, I decided to change the cover to make it look more attractive.

To do that, I started by changing the text from the Dune-looking style that is there right now, and I replaced it with something a little more traditionally sci-fi. I sort of had something in mind that is reminiscent of the Star Wars font, and I went off to the FontSquirrel to see if I could find it. All the fonts to be found there are free for commercial use, as far as I know.

I found a great font called MinstrelPoster and downloaded it. I also took a quick look at the license, which says:

> You may use this font for personal projects or for projects for which you are paid including, but not limited to, artwork, logotypes, personalized apparel, word art and web graphics.

It reminds me of the chunky letters used on the covers of old Star Wars novels, like Han Solo’s Revenge or Han Solo at Star’s End. To my eyes, it is suitably sci-fi looking, and I liked the look of the writing, but somehow it didn't fit with the subject of a young alien girl coming down to Earth to help stop an invasion. There is also the idea that all my books should have the same writing, as a kind of brand, a way for people to see that, even though The Pet Dragon is fantasy, it is still written by the same guy who wrote the space opera (with a heavy helping of military sci-fi) that is Galaxy Dog. If you read one of my books, you can expect the same woke sensibility, the same effortless passing of the Bechdel test, a modern book, in other words, on the right side of history. I switched the text back, and contented myself with just changing the cover image. I wanted to replace the spaceship on the cover with an image of the novel’s star, the Cosmic Girl herself. The way she’s described in the book goes like this:

> Skyler went to one of the chambers within the shuttle and changed clothes. She changed out of the loose robes she had been wearing, and put on an outfit that had been selected for her as likely to blend unobtrusively into Earth culture. In the chamber was a tall mirror, and she gazed at her new look. The costume consisted of a pair of what her information gate informed her were called jeans, specifically bell-bottoms, and a garment called a T-shirt. On the T-shirt was the name of a popular music entertainment act. On her feet were sneakers, on her face a frame containing lenses to cut glare from the planet’s sun. These were called mirror shades, but it was what she wore on her wrist that was most strange. It was a device for marking time based on measuring the release of tension in a coiled strip of metal. It could hardly have been more primitive if it used the flow of sand or water. She gazed at the timepiece in something akin to awe. She wondered if she would get used to trusting it to keep time, or if she should back it up with something a little more reliable. She dismissed the idea. Limiting herself to the technology available on Earth as much as possible would be one of the cornerstones of her mission. She looked exactly like an Earthling now, according to their best guesses, and she was starting to feel comfortable with her new body.
Her new physical form was tall and rangy, while her face was broad with dark brown skin. Her hair was soft-curled and dense, worn in a style called an afro that their research said was fashionable. Her new body was still very alien to her, but less so every day.

As well as Cosmic Girl, I have written, and am still writing a sci-fi series called Dark Galaxy that starts with Galaxy Dog, go buy it from Amazon.

In the end I decided against changing the font, but the book still looks very different.

Maybe I should stop dabbling in other genres, even though I have a great idea for a vampire story, an outline for a superhero yarn and the beginnings of a cool crime thriller. I've always been a little all over the place, and my writing is no exception. I enjoy writing books in The Dark Galaxy series, and I'm now half done with the latest installment, but I think the series benefits from me taking a break between each installment to write something else.

My forays into fantasy and horror clean my palette, after a boozy session of sci-fi. I think rolling from one installment straight into the next, to extend the metaphor, would just lead to drunken excess.
Labels: sci-fi novel self-publishing