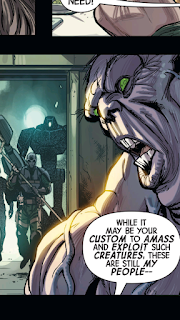 I was just looking through my drafts folder in my email programming, and I found some old posts I meant to send to my blog, but never got round to. Here's one of them, from way back in 2015.

All-New Inhumans. I wasn't so sure about this title after just reading issue one but, with issue two, it is really starting to build into something.

The art is a little static for my taste, but is still undeniably skilful and gives the title its own look and feel, which is all you can really ask of comic book art, but, despite this, the ideas shine through. The comic has a world-shaking central idea. The idea is that a proportion of humanity has a special component, alien DNA left among our genes in prehistoric experiments to be specific, that can activate and  turn the person into a superhero. It's an intriguingly Lovecraftian idea, and the new subset of humans created are upsetting the usual political dynamics of the world, represented by SHIELD.

In this issue a thinly disguised North Korea is reimined as a manufacturing powerhouse, supplying all the gadgets used by the bad guys. It's interesting to see an attempt to think about the economics and power relationships in the sort of crazy world inhabited by superheroes.

That's as much as I wrote, so I guess you'll have to come up with your own conclusion.

Mine is that now Marvel pretty-much have the X-Men back in house, we will never hear as much again about inhumans as we did back in 2015.
Labels: Marvel