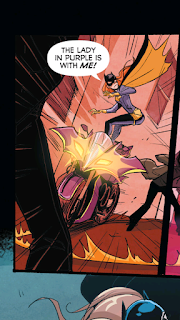 Here's another post from a couple of years ago that I found just sitting around in my drafts section. Well, all content is good content, so I'm putting it on the site.
This issue of Batgirl starts with a very interesting scene. The comic has the same "TV cartoon show" type art from issue one, but the subject matter is heavy. An old lady is dealing with gang violence in her hood and talking about the causes.
It's nice to see a little real-world politics in a comic book, from time to time. (That was written a few years ago, obviously. After you-know-who crashed American politics, things have changed).

The big bad this week is nice too, a sort of Wolvereen with tats and a slasher-movie mask. He does a nice twist on the red or blue pill idea, using red or blue cards. There is a bunch of soap opera in the issue, but no more than a more mainstream title like X-men. And I prefer the sparse line art of Batgirl, which avoids a lot of the cheesecake, spine-twister poses you find in other titles.
Labels: Batgirl DC Comics