Completing the spaceship on the cover of Sun Chaser

The third book in the Dark Galaxy trilogy of four books, and counting, is Sun Chaser, which has a closeup of a spaceship's nose on the cover. The reason that this spaceship is seen in closeup is that the only part that exists of it is the nose. If the camera draws out just a little bit, you can see that there is no body, no engines, no nothing behind the nose and cockpit.

I've decided to put that right, so that when, inevitably, I get round to releasing an illustrated version of Sun Chaser, I can use the same spaceship, but this time in long shot, maybe as part of a space battle or something.

I'm doing this all in Blender, as usual, which is the free and open source 3D creation suite. It supports the entirety of the 3D pipeline—modeling, rigging, animation, simulation, rendering, compositing and motion tracking, even video editing and game creation. Blender is a public project, made by hundreds of people from around the world; by studios and individual artists, professionals and hobbyists, scientists, students, VFX experts, animators, game artists, modders, and the list goes on. It is perfect for creating covers for ebooks that feature 3D assets like spaceships, robots, and such like.

The first thing I had to do was tidy the mesh up, and smooth it out a little, because it had gotten a little messed up. Then I had to start adding some... erm... back. More news as I get on with this. 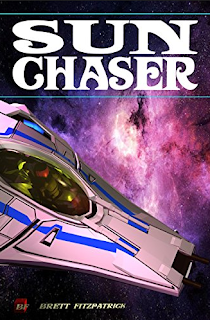