Doctor Who - Demons of the Punjab 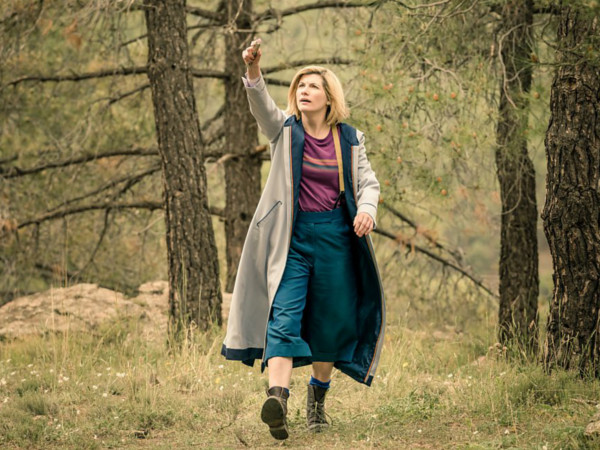 Let's talk about episode six of series eleven of New Who. It is like no episode of Doctor Who I have ever seen before, but in a good way. It wasn’t perfect – Doctor Who never is – but it was well above average. A lot of the latest season of the show has been harking back to glory days, with space station under siege episodes, giant monster episodes, and a regeneration episode. But this latest installment was, as far as I know, something new. There is no way to make the point about this show that I want to make without letting rip with the spoilers, so... be warned. The spoilers cometh.

The thing that makes this episode so different is that the scary looking aliens in this episode are not actually the threat that the Doctor and her companions have to deal with. Like in The Walking Dead, the humans are the real monsters. The episode ends with a gang of thugs on horseback, come to butcher the Doctor and her companions, and the aliens don’t get involved with this at all, except to watch. The humans are the threat, and the Doctor can’t do anything to save the person this gang of murderers has come for.

In the end, the story wasn’t about the Doctor coming up with some clever scheme to fix an alien problem. It was more like a short story with sci-fi elements, where the author had a very clear idea of where he wanted to go, and the points he wanted to make. We saw the great events of history glimpsed by people history considers absolutely insignificant.

The Doctor, like the viewer, was kind of along for the ride. I enjoyed it because it was a story I wanted to hear, but I did not like the way the Doctor was unable to do much to influence events.
Along with a great story, the design of the demons was nice, even if their faces didn’t move at all. I guess they were supposed to be able to talk telepathically, and so the lips of the masks didn’t need to be articulated, which was actually okay. I soon forgot about their immobile faces and just gazed at the great design of their clothes, and their spaceship. The Demons of the Punjab has monsters that are a vast improvement on the stupid creature from the episode we had last week. They had real gravitas, befitting of such an important story from the past.

All in all, I enjoyed this episode greatly, and I am starting to feel at home traveling with the Doctor and Yaz, and I can put up with the two guys, though neither of them added much to this episode. There were faults, as usual, and I’ll dedicate a few words to griping about them, but they are not meant as criticism. If Doctor Who ironed out all the unevenness, it wouldn’t be Doctor Who anymore.

My first fun gripe is that the Doctor is completely unarmed, and yet she is always running at super-dangerous seeming aliens. This is not a good idea, and it makes her seem stupid, or overconfident to the point of insanity. Or it just reminds us of her plot armor, which is just bad writing. The aliens in this episode are spiky-shoulder-pads-wearing gargoyles, who the Doctor describes at one point thusly:


They can move faster than your bullets.

It makes absolutely no sense to be running toward them, and then, later in the episode when running away from them, to be able to outdistance them. Even worse, the Doctor snatched the thing that is most sacred to them, the last remaining puff of dust from the destruction of their home planet, and an alarm goes off. The aliens then instantly appear, hissing and ready for action, and then... nothing. The Doctor and her companions just wander off, at a bit of a canter true, but not at a breakneck pace, and the aliens do not pursue at all. It’s just stupid. It’s like the sort of action you might see in a pantomime. It turned out the aliens were just observers, and quite chatty ones at that, so it made sense that they didn’t chase her down and kill her along with her friends, but it was still not hugely believable.

My second gripe was that everything was filmed with such an intense yellow filter that it looked like a Kodak commercial, or an episode of CSI Miami. I suspect this episode was filmed in the UK, or off season somewhere hot (I Googled and it was filmed in Andalusia) and that’s why the filter was needed. The yellow was intended to heat everything up, I guess, but it was not hugely convincing.
But, like I said, you have to expect this kind of stuff from Doctor Who. It’s part of the tradition that the action is not believable, the chases are sedate, and the fighting is perfunctory. That’s just how Doctor Who is, and you have to get used to that.

Despite these gripes, there were a lot of great things going on in this episode, especially with the central cast. I liked how this episode was built around Yaz, who is a fascinating character and a magnetic presence. Her grandmother was sickly sweet and perfect, and about as convincing as the yellow filter used to make the countryside look like summer in Lahore, but Yaz was great. I particularly liked seeing her dealing with her emotions at her own grandmother’s wedding, and being asked if she is okay. In reply, of course, she says:


I always cry at weddings.

The Doctor was great again, as a manic, distracted person, who likes taking risks, learning, and having fun. She waves her sonic screwdriver around a little too much for my taste, and I hope they can ease off with this element in the future. I would also like her to sometimes be able to exude a little menace, like Tom Baker sometimes injected into his performance. Such as when the Doctor, in Revenge of the Cybermen says to the cyberleader:


You're nothing but a pathetic bunch of tin soldiers skulking about the galaxy in an ancient spaceship.

The current incarnation, on he other hand, is very eager to please at the moment, and a glimpse of some cold, alien, edge to her personality would be great. Something tells me it’s coming, but I’m very happy with the facets of the Doctor we have seen so far.

Yaz and the Doctor are unreserved favorites of mine, and Ryan has potential.. probably... but the granddad character is really starting to grate on me. I don’t like all the platitudes and advice he is constantly dishing out. The Doctor should be the adult in the TARDIS, and having granddad around just undermines her authority.

At the end, there is a new version of the theme tune that is an unexpected delight, and which put a smile on my face. I enjoyed this story very much, and it was nice to see the Doctor and her companions in the TARDIS at the end, a real team. Unfortunately, then came the trailer for next week’s installment, and it does not look good. It looks to be set in an Amazon fulfillment center, and that – in a setting that includes Time Lords, Cybermen, Daleks, and Ice Warriors – is not enormously inspiring. Oh well, I’ll be watching it anyway. Sigh.

I'm a big fan of Blogger, and I'm glad it is still going. It even looks like some, probably very small, team is working on adding new features and keeping the venerable old site working. The reason I stopped using it was because it looked like G+ was killing it, but that doesn't seem to be the case anymore, so... I might keep using the old platform for a while.

I'm using a cool page that makes HTML from Markdown to move my old blog, page by page, to Blogger.
Labels: blogging Doctor Who self-publishing TV