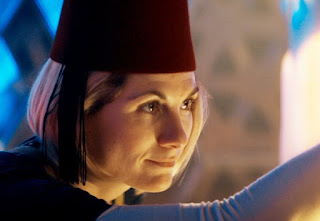 Here we go with my thoughts about episode seven of series thirty-seven of Doctor Who, which is called Kerblam!. To sum up, I’ll start by saying it was not my cup of tea, but I expect it will be popular with most. And, even though I mostly didn’t enjoy it that much, there were some good things about it. Ryan got through a whole episode without mentioning his dad, for one thing, and then there was the threat.

In a very funny nod to The Ark In Space, the deadly threat in this week’s episode is... here comes a huge spoiler, so stop reading if you haven’t seen the show, and all that... killer bubble wrap. This is Doctor Who written by somebody who appreciates vintage Doctor Who tropes, including the use of bubble wrap in its cheepo special effects. That’s not the end of the fun nods to the past either, at one point the Doctor again employs her Venusian Aikido, in a moment of violence that underlines just how dangerous she can be.

Unfortunately, apart from a few nice touches like this, the show this week was, like I said, a tough watch for me. A lot of other people across the Interwebs have said they quite enjoyed it, but it didn’t really float my boat. This week The Doctor, Ryan, Yaz, and Graham take on Amazon. Once again, just like with the bubble wrap and the Venusian Aikido, Doctor Who is referencing a theme from its past.


The episode has a structure that has been used before on Doctor Who but this time it is not a space station under siege or a historical episode, it is a thinly veiled exercise in social commentary. To my mind, it is most like The Sun Makers), which was the fourth story from the fifteenth season of the original run of Doctor Who, which was first broadcast in November 1977, although Doctor Who has gone to this particular well a few times in its history, and there are other examples of extremely overt politics in the show. The Sun Makers is a really egregious example, however, so let’s go with that.
The Sun Makers is set on Pluto, where the Fourth Doctor (Tom Baker) and his companion Leela) start a revolution against an alien corporation which has an economic hold over humanity. Before the revolution, there are giant cities, each ruled by a taxation Gatherer, and the entire tax operation reports to a malevolent Collector. There is also a fear-inducing drug added to the air and squads of armed goons to keep the population servile. During the revolution, the Doctor fixes things by sabotaging the planet’s computer system, just like in Kerblam! Apparently, the writer of The Sun Makers, Robert Holmes), seems not to have liked the fact that the UK at the time had a liberal government, who made him pay some taxes on his TV riches. In revenge, he wrote an anti-tax script for Doctor Who.

In the episode, Leela and the Doctor are identified as terrorists, which is actually fitting because Leela's character was, in fact, partially based on Palestinian revolutionary Leila Khaled. The story is pure politics, wrong-headed small-government politics, sadly, and is a real slog - in my opinion, at least.

According to Wikipedia, The Sun Makers was very popular when it was broadcast, so I might be in the minority in not liking it. Kerblam! is a similar investigation of politics, but this time aimed at huge companies that exploit their employees. I agree with the political sentiments this time, but I still didn’t enjoy the show much. Doctor Who just isn’t a good fit for this kind of Black Mirror stuff. According to Wikipedia:


Black Mirror is an anthology science fiction television series created by Charlie Brooker that examines modern society, particularly with regard to the unanticipated consequences of new technologies. Episodes are standalone, usually set in an alternative present or the near future, often with a dark and satirical tone, though some are more experimental and lighter.

It feels like this week’s episode of Doctor Who could actually have been written for Black Mirror, and then retooled to include the Doctor. It is just too direct to be enjoyable as Doctor Who, at least for me. I think that Doctor Who should be a little less obvious, a little more oblique, when taking on real-world politics. For example the Daleks, once you know, are very obviously based on the Nazis, but they are just removed enough from their real-world inspiration that it is very easy to forget this, and that means you can enjoy them on their own terms.

In a story like The Sun Makers, it is very hard to enjoy it as anything other than a writer using one of your favorite characters to explore a political thought experiment, and that is just as true of Kerblam! In echoing the past so slavishly, I think this week that Doctor Who has taken a step back. Next week it looks like we will be in the woods with witches, so maybe they can take two steps forward. I sure hope so.
Labels: Doctor Who TV