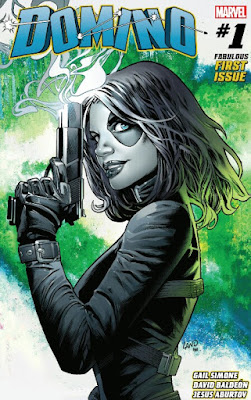 I don't know a lot about Domino, but I have always been intrigued by the character - I mean, why does she have a patch on her face over her eye?

Thanks probably to Deadpool 2, the character has been given her own comic book, so I figured I would give it a try. It's written by Gail Simone, read more about her here:

And it does a cromulant job of introducing the character. I was fed the information that she was a mercenary with some kind of probability-manipulation power within the first few pages. The reason for her face tattoo, if that is what it is, was left in the dark, but there is a hint that some kind of story lies behind that.

The story starts pretty much straight away with a big fight, and there are some witty comments - not Oscar Wilde but witty - like Domini complaining of costume ride up when her partner throws her in a fast ball special.

The bad guy is a sad-sack mutant called Greywing, and his exchange with Domino and her partner is interesting. He's jealous of her, and thinks her power is like winning the lottery. She tells him that he doesn't know anything about her, which is the second time she's hinted at a dark history, with the issue only half over, and then she lets the guy crash at her safehouse.

I thought tyhat was weird, but then, what do we know about how superpowered mercenaries and mutants would treat each other after battle. Maybe they are like the knights of the middle ages, who were hospitable to each other, when they weren't trying to chop each other up.

The second part of the comic book is a party attended by mutant royalty, including Storm, Deadpool, Dazzler, and a bunch of others. I was vicariously enjoying being at the party, but then the "bad thoughts" came, which I found intriguing, and we get some payoff on those hints from earlier.

It is just a brief flashback, but it looks like that face tattoo came along with a whole bunch of bad memories. Things get serious after the party, and the whole thing is tied up with a pleasing, cliffhanger, bow. I enjoyed issue one, a lot. I'll have to catch issue teo and see where this story is going.
Labels: DC Comics