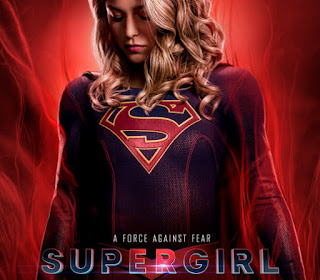 Season four of Supergirl is in full swing now, and it is a show that rewards watching. I’ve been a fan from the very start, and I wrote a post about Supergirl’s sci-fi credentials back then. If, like me, you started watching this show for superhero battles, you will notice that this element is getting less and less. The first season did knock-down, drawn-out battles between opposing super powered individuals very well, but the show has a lot of episodes under it's belt now, and it has evolved beyond that, into something different. It has changed, but in my opinion, it is just as good now, if not better.

The show has been growing and changing, letting some people go, such as Calista Flockhart, who played Cat Grant from 2015 to 2017, and bringing new people in, like Brainiac5. And this is all handled in an organic and smooth progression. It has been such a gradual journey, it is a surprise how far things have come. This journey we’ve been on was brought home to me in a lively scene in episode one, where a young, eager reporter in training called Nia Nal ishired to work alongside Kara Danvers, Supergirl’s secret identity. Almost immediately Supergirl realizes that this eager-to-please puppy is what her secret identity used to be like. It isn't who she is anymore, though. Now, in her secret identity, she is assured and commanding, even becoming a mentor figure to Nia Nal. As Supergirl sees how far she has come, and sees who she used to be, way back in season one, she says to Nia:

It's a great piece of writing, because as much as Supergirl sees herself in the new hire, this woman is somebody else, somebody new, somebody who brings something interesting and different to the show. All this growth and change is great, but it hasn't been happening in a vacuum. The writers of this show are real people, living in the real world with the rest of us, and they have obviously decided that they are not going to try to hide the way this influences the art they make.
What I mean is, the bad guys in the show for season four are the alt-right.

They have super technology and spandex, but they are the true Nazi base that Trump panders to, and Supergirl is having all kinds of trouble in taking them on and dealing with their twisted shenanigans. When you remember that Superman was written by a couple of Jewish guys, and he started out battling Nazis, this makes a lot of sense. Superman was created by writer Jerry Siegel and artist Joe Shuster, and in "How Superman Would Win The War", the Man of Steel took all of two pages to (literally) tie up the Nazis' frontline guns, punch all their planes out of the sky, gather up the Führer and present him to the League of Nations to answer for his crimes. It is so gratifying to see the show connecting with this part of its DNA.

At the center of this battle against the alt-right, Supergirl is at the center of a space where people of different ethnicities, different orientations, trans people, and basically the full gamut of who we humans are, come together to fight evil. The fact that a bunch of crazies, bigots, and racists are out there trying to bring this beautiful dream down is all too topical, and chimes with what we are seeing in the real world.

Of course, even though there are setbacks, Supergirl will win, which is also what will happen in the real world, of course. It’s comforting to know the battle will inevitably end in victory, but there will be ugly stuff on the way. The most horrible thing is the poison that seems to infect people’s minds, both in the show and in real life, too. There is a great scene where Brainiac 5 goes to order pizza from his "friend", the guy who runs the pizza parlor. While ordering pizza, his high-tech human disguise glitches, and the man sees how Brainiac 5 really looks.

Brainiac’s encounter with the pizza guy, confronted with the hate the man spits, is not a superhero battle, but it has so much power. This show is very consciously picking a side, as it grows into its voice, and I am enjoying it as much as ever.