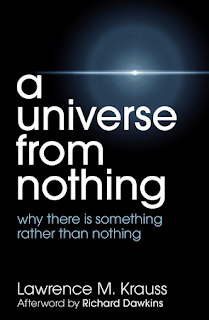 "...so strikingly non intuitive that it can seem almost magical."

This is one of my favorite lines from A Universe from Nothing and is used to describe the imprint of quantum fluctuations on the cosmic background radiation, but it serves equally well to sum up the entire work. The author has managed to take a lot of non intuitive concepts and make them understandable.

The universe is 13.72 billion years old. That's the first time, I at least, have read such an exact estimate of the age of the universe. This means that the universe is 70% dark energy, the rest is mostly dark matter and the stuff we are familiar with - the stuff we can see - is only a "sprinkling" of ingredients mixed into this dark mass.

No less amazing is the fact that until comparatively recently women weren't allowed to look through the telescopes of prestigious American observatories. They were brought in as "computers" to do the calculations for their male colleagues. This book pulls numerous women from the obscurity they have been consigned to by sexism and tells about their essential contributions to our understanding of the whole darn universe.

The book is full of amusing anecdotes, such as the fact than when a system moves from deceleration to acceleration this is called a "jerk" by scientists, and when it was found that the whole darn universe had done this, a newspaper ran a picture of one of the author's colleagues with the headline "Cosmic Jerk Discovered".

He also compares the phase shift the entire universe went through to cold beer. When you take a cold beer out of the fridge and pop the cap, sometimes it instantly freezes because the pressure has been released. Fun examples like these are, for me, the mark of a writer who can make quite a technical subject fun to get to grips with.

The Earth may not be flat but the universe is. Flat means, in this context, neither open nor closed, with an open universe quickly flying apart and a closed universe falling back in on itself in a big crunch. Our universe is flat because it is steadily expanding. It is amazing to me that we know this and that we have only known it for a couple of decades at most.

There is a lot more in this book, and it is a lot of fun.
Labels: Ebook reviews