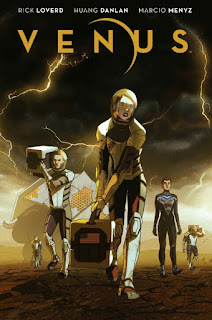 I am always looking for good sci-fi comic books. Don't get me wrong, I do love me some superhero-type action, but it is sci-fi that is my real weakness.
In my search for sci-fi in comic book form I came across a book called Venus, and it has a cover that immediately grabbed my attention. We see a group of grim-faced people in space suits dragging equipment across an alien landscape with a storm gathering behind them, just my cup of tea. Actually, the suits aren't space suits because they are for use on the surface, so the crew call them walk suits.
It starts, as many of these type of comics do, with a colossal info dump in text panels, but these are made more palatable by the images of disaster that unfold soundlessly beneath them. Infodumping at the start of a sci-fi work, be it TV, movie, novel, or comic book is a bee in my bonnet, but I guess this book just about gets away with it.
It then does something good by immediately, in the first exchange between new captain and her crew, passing the Bechdel test.
The technology level on show is high, and hardly hard science. We see robot crabs assembling surface crawlers and drones flying by no means I can see, so I'm guessing the technology is gravity manipulation.
I liked the designs for the technology, always an important factor in a sci-fi story for me, all except the surface crawler vehicles. I like the big tires, but the body shape looks very strange. With some head cannon about having to have a very high and flat floor, for terrain clearance and stowage, I can live with them. Mostly. When we get a shot that clearly shows the wheels don't have axels and the crawlers sit on them like a temple on columns, I just can't make sense if it. How can a wheel not have an Axel?
After surviving the crash landing, the crew make it to a habitat that seems to have been built automatically to wait for them, and then they are confronted by one problem after another.
It is a nice mixture of a Star Treck landing party sensibility, but with a plot that is more Lost in Space. In fact, it follows the usual formula so slavishly that it is even a little tropey and predictable.
I've only read a collection of the first four or five issues, though a pleasing amount happens. This is not one of those expanded, slowed-down titles that takes an entire issue for the hero to have a coffee.