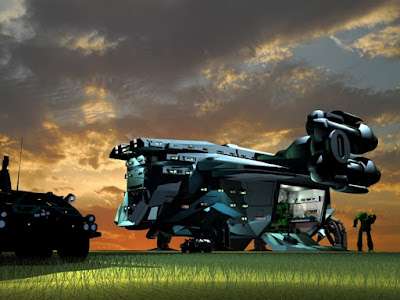 I think that one of the most important aspects of a sci-fi novel is the worldbuilding. I'm a sci-fi novelist, the guy responsible for releasing Galaxy Dog and all its sequels into this world, and worldbuilding is something I end up spending a lot of time thinking about, so I'm instating a tag on this blog especially for this important subject. This very post is the first collection of random synapse firings collected under its banner.

In a novel set in present day New York, anyone who has ever seen a few TV shows or movies knows all about the world and the characters who live in it. Even the most abstruse details, such as subway tokens, are understood very well by the reader, no explanation required. We know who the police of New York are, and we know about both Wall Street and Hell's Kitchen. If you create a fictional city, or even an entire planet, or system, or galaxy, this is not true.


Before you start writing about the planet your novel is set on, nobody had seen any TV shows set there, and they have certainly never been there on holiday. You have to make up all the details about the planet from scratch, which is challenging, but fun.

Worldbuilding is the process of constructing an imaginary world, sometimes associated with a whole fictional universe. Developing an imaginary setting with coherent qualities such as a history, geography, and ecology is a key task for many science fiction or fantasy writers. Constructed worlds can be created for personal amusement and mental exercise, or for specific creative endeavors such as novels, video games, or role-playing games.

One facet of worldbuilding that sometimes gets ignored is economics. Obviously, in a galaxy where artificial gravity and teleportation work, the temptation might be to ignore economics entirely, but I think that would be a mistake. Economics is a powerful motivator, after all, and it is an expression of some of the widest intellectual differences of our time.

I'm no expert, but I've read quite widely about economics. I think that is plenty good enough - remembering that we are talking about a setting where antigravity and FTL drives exist, so scientific laws can be well and truly fu... fu... fudged, as long as it is in the service of a good story.

If I need a couple of the characters in one of my books to steal some xenoart and fly it half way across the galaxy to a buyer, I am not going to get out a pad and calculator to work out if that trip could ever be economically viable. I just ignore the economics of all that and get on with telling the story.

The economics that does interest me, however, is the economics that might allow an underclass - a rebellious and revolutionary underclass - to be created, even in a galaxy with matter printers, robot labor, and protein pills. In a setting of such riches, is it possible to even entertain the notion that a lot of the common people would be poor?

I would say yes.

Firstly, because the story demands it, but secondly because I think I can see a believable mechanism to create this situation. In my sci-fi series , Dark Galaxy, the rich folk spend enormous amounts of money on stupid things, like terraforming an entire planet to exacting specifications, just for a single party. They tie up all the spare cash of the economy in savings, investments, and luxury spending, just like the rich folk of today do.

Most people, on the other hand, are working among drones and robots, drugged, lied to and cowed. It is no fun to be consigned to the underclass, whether now or in the future.

And that's why economics is an important part of worlbuilding.
Labels: self-publishing Worldbuilding