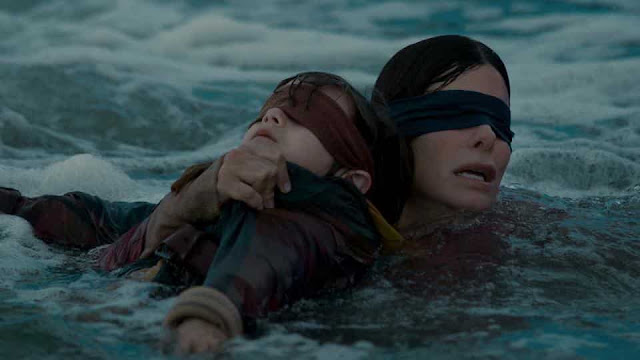 I am a big fan of anything post-apocalyptic, and I will watch such shows and movies even if they are not good. In fact I'll watch them even if they are really bad. Thus, it has not taken me long to seek out and see Bird Box. My verdict, without getting too spoilery, is that Bird Box is very entertaining, well directed, and well acted, but too reliant on tropes, and with an ending that did not hit home, for me at least. It’s not bad, although it sure isn’t great either.

The main thing holding this film together, its great strength, is the cast. The cast really sell what is happening on screen at any particular moment, and help distract from the holes in the plot. The biggest and most pleasant surprise among the cast was John Malkovich. I am no fan of his, or the choices he makes in playing his roles, but here most of his excesses are held in check, and he is actually excellent as a crotchety old man. No prizes for guessing this character's politics, which are none too subtly alluded to, early in the film. He's not the star, though.

The star is Sandra Bullock, who is an actress who can be excellent, but can also be very schmaltzy if she is allowed to be. The director must have kept a tight rein on her because she manages to keep a lid on the cheese in her scenes with the kids. She is supposed to be a cold and domineering mother, and that must have helped in keeping her performance on track.

Her love interest, Tom, is played by Trevante Rhodes and he's great in an underwritten role. It was also a pleasant surprise to see Tom Hollander. He is a great comedic actor, and he enlivened the movie with his presence. Considering that it probably only had a TV movie budget, the movie also looks great, with a muted color palette and a very well judged pace. It is an engaging and entertaining movie, thanks to the acting and camerawork, but it does have flaws. I think a lot of the problems, though by no means all, stem from the book chosen as a basis for the movie. A lot of people think the book is based on The Happening, but I suspect it actually got green-lit for a movie because of the success of A Quiet Place.

Up to this point I've been talking in generalities, but now it's time to throw caution to the wind and get all spoilery about this film. Be warned, if I'm going to criticize the plot of the film, I'm going to have to spoil some of the twists.Go away and watch it now, if you ant the unspoiled experience, or you can stay and read my gripes about it.

I like post-apocalyptic horror so much that I have written my own zombie book. It's called Death Sense and it is available from Amazon. Here are the first two lines of the blurb:

Death Sense is a story about people who survive, either in small groups, alone, or in large communities, and what happens to them as the world continues to crumble under the weight of the zombie onslaught. The cities are first to fall, huge urban centers like San Francisco being lost in just a few days, and as each last bastion of society crumbles, the survivors must more and more confront the possibility that they are the last humans left alive.

Death Sense is a novel of constant battle against the end of the world, brought on a tide of zombies, but there is also space for human relationships. People who would never otherwise meet are forced together, and their feelings are felt intensely, sometimes hate and sometimes love.

The first thing I have to point out is that although it's great that Bird Box has a diverse cast, it is not great that the first characters from the house who are killed are an Asian man and a black man. It is also uncool that the Asian guy doubles as gay. This is all the usual Hollywood half-assed casting, where diversity happens in the minor roles, and it hurts the movie. It is almost, but not quite, as bad as just making the cast all the director's white friends. In this day and age, the creative team just has to put some thought into this aspect of a movie. Casting brown people as secondary characters in horror movies and then instantly killing them is a terrible trope that has to be consigned to the dustbin of movie history. It is also not great that the relationship between Malorie's character and Tom has to end with his death.

There are other big problems with the writing, too. The monsters cannot hurt people unless those people look at them, which means they just are not threatening. If you don't look, you're safe. To create peril, the writer is forced to introduce a nasty trope, where the "criminally insane" became the real threat. They are immune to the creature's powers and they want to make other people look at them. The creature is no real threat at all, but there are constant attacks by these crazies.

Lastly, the ending is super weak. In a very Shylaman-esque twist, the only safe place on Earth is a blind school. Oh boy... That's dumb.

The fact that the safe place Malorie spends the entire movie heading toward is a blind school just doesn't make any sense. The world has been demonstrated to us, according the movie's own twisted and distasteful logic, to be chock full of "crazies" just itching to make people look at the monster. These crazies are perfectly willing to kill in the pursuit of this goal, and there is nothing, absolutely nothing, about the blind school that will make them immune from an attack by these crazies. Instead of thinking, "Oh, that's clever," at the twist, you end up thinking, "Huh? How does that make sense?"

Apparently the ending scene in the original novel has Malorie and the children find a group of people who have gouged out their own eyes for safety. The version in the movie is less bloodthirsty, but neither version makes a lick of sense.

Putting all my praise for the actors together with my gripes about the tropes and the plotting, I would still say that this movie is deeply flawed but also supremely enjoyable for long stretches of its running time, and for me, that is plenty good enough reason to keep watching, right up to the disappointing nothingburger of a twist.

So, watch this movie by all means - there is a lot to be enjoyed - but be warned that there are some distasteful tropes and some half-baked ideas that will likely take you out of the film from time to time, and will prevent the ending having the intended emotional impact.
Labels: Movies netflix post-apocalyptic horror